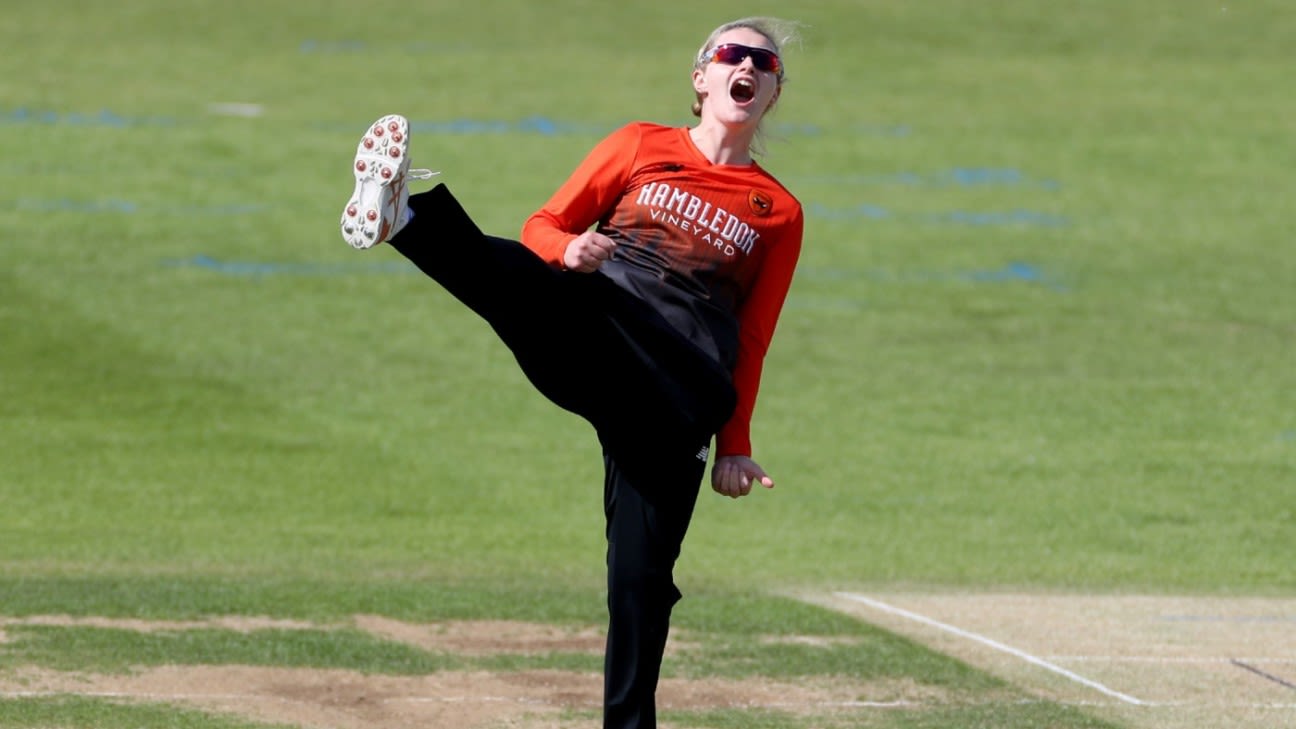 England off-spinner Charlie Dean took two wickets and took part in a match-winning partnership with Ella McCaughan as Southern Vipers won a maiden Charlotte Edwards Trophy title at Northampton.
A solid bowling performance from Vipers restricted Sparks to just 109 for eight in their 20 overs despite Amy Jones' 27. There was a tangible sense of deja vu at Wantage Road as Sparks repeated their semi-final performance earlier this afternoon, losing wickets at regular intervals and limping into three figures.
Maia Bouchier contributed a fluent 32 in the run-chase before Dean (7) played the supporting role in a 41-run stand with McCaughan who struck a run-a-ball 30 to take Vipers to victory.
The victory means Vipers, unbeaten all season, have added the T20 trophy named after their coach Charlotte Edwards to their cabinet after winning back-to-back 50-over titles in the last two years.

Amy Jones has been in ominous form in this competition and Vipers thought they had their prize wicket when the England captain was on nine, only for Adams to put down a catch at mid-off off the bowling of Anya Shrubsole. Jones then rubbed salt in the wound, hitting her former England teammate for four in the same direction as Sparks finished the powerplay on 36 for two.

Jones had advanced to 27 when she fell attempting one big shot too many, with Bouchier taking an excellent tumbling catch.at mid-on off Dean.

Abi Freeborn (18) looked to be positive, coming down the pitch to drive Dean through extra cover for four to bring up Sparks' 50 in the tenth over but fell shortly afterwards. Chasing a width ball from Georgia Elwiss she was stumped by some smart glovework from Carla Rudd. When Ami Campbell was run out six balls later by Danni Wyatt, Sparks were 61 for five and threatening the second batting collapse of the day after their nailbiting semifinal win.

Sarah Glenn (16) went on the attack in an attempt to give Sparks something to defend. She uppercut Bell square for four and slog swept Dean over fine leg for consecutive boundaries. Her downfall came when she drilled a ball from Adams straight back to the bowler. Adams then brilliantly ran out Emily Arlott in the same over after diving to stop the ball off her own bowling. to leave Sparks on 93 for seven.

Gwen Davies (12) was the eighth wicket to fall, run out by Bouchier before Davina Perrin hit the final ball of the innings for four over extra cover to close on 109 for eight.

England T20 opener Wyatt took three boundaries from Grace Potts' first over but was dropped at midwicket off the same bowler on eight. Sparks were grateful that the mistake did not prove more costly as Wyatt was soon caught at midwicket off Arlott for 20 (10 balls) to leave Vipers 37 for two.

Bouchier struck Wong high over deep midwicket for four and cut Arlott square for another boundary, but otherwise was content to knock the ball around as she took Vipers to 50 for two at the end of the powerplay.

Turning to spin for the first time, Sparks made an immediate breakthrough when Glenn trapped Elwiss in front, but Bouchier continued on her way, pulling Glenn away for four, and scoring all around the wicket. Her innings came to an end though after a full and straight delivery from Arlott knocked back middle stump. It left Vipers on 72 for four needing 38 to win off the final ten overs.

McCaughan reverse-swept Glenn for four while a wide from Potts which flew away for four eased the pressure further. McCaughan sealed the win by pulling Wong for four through square leg. A pacy Arlott was the pick of the bowlers with two wickets.

More in this category: « Lanka Premier League 2022 to kick off on July 31 Warwickshire land long-term target as Ed Barnard signs three-year deal »
back to top