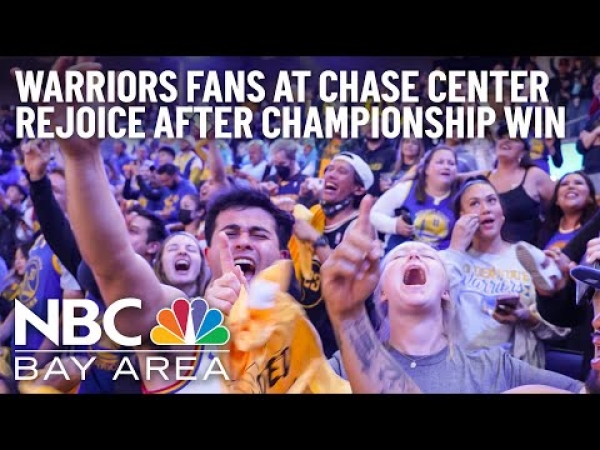 Warriors Fans at Chase Center Celebrate After Watching 2022 NBA Championship Win in Game 6
The Golden State Warriors won their fourth NBA championship in just eight years with a 103-90 win against the Boston Celtics in Game 6 Thursday night. The game was played in Boston, but thousands of fans packed the Chase Center in San Francisco for a watch party that quickly turned into a joyful celebration, as confetti and streamers fell from the rafters, and fans rejoiced. Stay connected: Follow us on Twitter: http://www.twitter.com/nbcbayarea Like us on Facebook: http://www.facebook.com/nbcbayarea Follow us on Instagram: http://www.instagram.com/nbcbayarea Follow us on TikTok: https://www.tiktok.com/@nbcbayarea Catch up on all the day's news: http://www.nbcbayarea.com Download our mobile app: On iOS: http://nbcbay.com/R1BhqYM On Android: http://nbcbay.com/rUcA97h Watch us on OTT: Add our channel on Roku: https://bit.ly/3ySK60j Download our app on Amazon Fire TV: https://amzn.to/3FmmiEA
Read 24 times
More in this category: « Stephen A. on Draymond: This is one of the most HORRIFIC performances we've ever seen | First Take Full interview: Avs goaltender Darcy Kuemper wins the 2022 Stanley Cup »
back to top