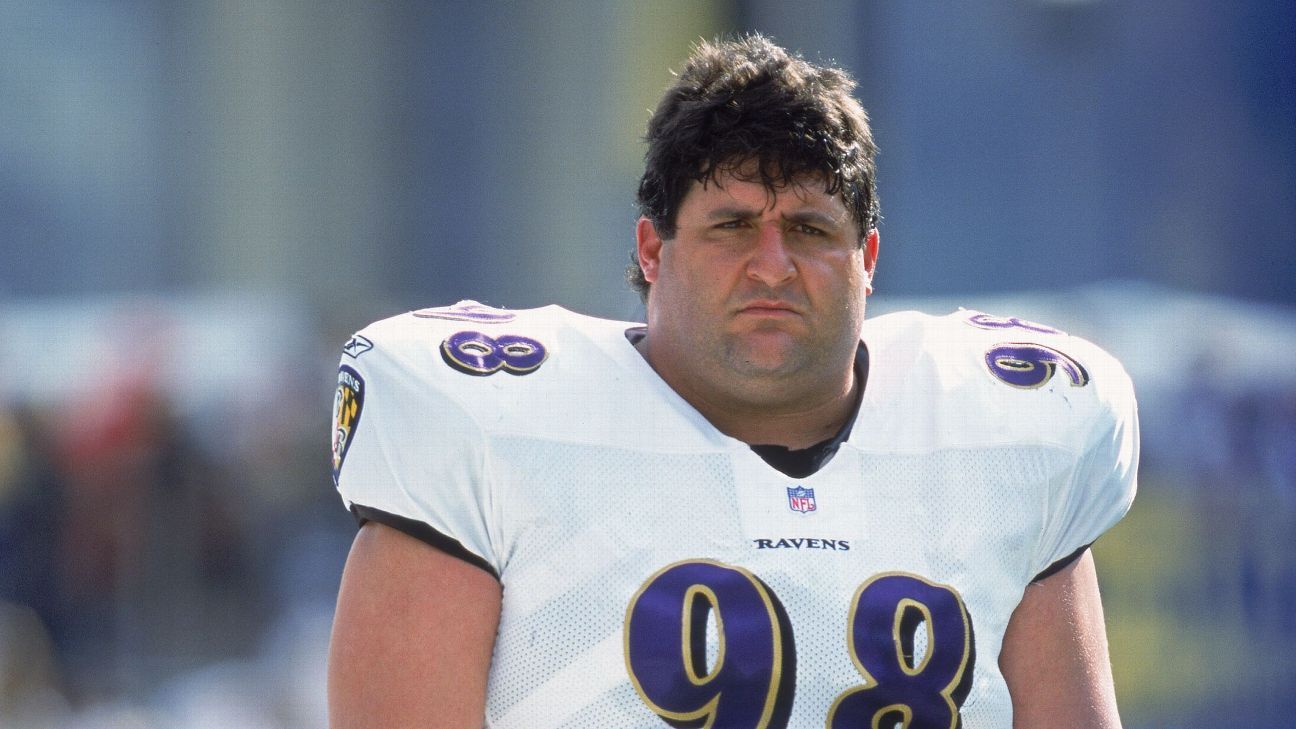 Tony Siragusa, the NFL defensive tackle who became one of the game's biggest players and personalities, died Wednesday at the age of 55.

The cause of Siragusa's death was not immediately available.

Affectionately known as "Goose," Siragusa served as a vital cog in the middle of the Baltimore Ravens' historic 2000 defense, which spearheaded the franchise's first Super Bowl title that same season. He started his 12-year career by drinking away his $1,000 signing bonus as an undrafted free agent and left the game as one of its unique personalities who was known for his irreverent sense of humor and memorable pranks.

"There was no one like Goose -- a warrior on the field and a team unifier with a giving, generous heart who helped teammates and the community more than most people know," former Ravens coach Brian Billick said. "We would not have won the Super Bowl without him. This is such stunning, sad news, and our hearts go out to Kathy and the Siragusa family."

Indianapolis Colts owner Jim Irsay tweeted that he was "heart broken as is all of Colts Nation." Irsay added in a follow-up tweet that, "The Goose squeezed 200 fun loving years into 55!!"

The Goose squeezed 200 fun loving years into 55!! He was one of the most physically strongest players I have ever seen in 50 years??? In Greece,they would ask 1 question at the end of one's life; Did He Have Passion? In Tony's case..Yes He Did!!??????❤️

Known as a blue-collar run-stuffer, Siragusa enjoyed that his biggest moment came on a quarterback hit. In the 2000 AFC Championship Game, Siragusa took out Oakland Raiders quarterback Rich Gannon, driving the All-Pro into the turf and separating his left shoulder. The Ravens went on to beat the Raiders, 16-3, to advance to the Super Bowl.

"I saw Rich's eyes roll back," Siragusa said at the time. "He got every pound of my fat ass on him."

As much as Siragusa relished the spotlight off the field, he was comfortable with doing the dirty work for one of the NFL's premier defenses, even though it led to countless knee surgeries and no Pro Bowl invitations. A 6-foot-3, 340-pound wall in the middle, Siragusa occupied double teams to allow middle linebacker Ray Lewis to roam freely and helped Baltimore set league records for the fewest points (165) and rushing yards (970) in a 16-game season.

"This is a tough one," Lewis said. "I love Goose like a brother. From the first day we met, I knew that life was different. I knew he was someone who would change my life forever. He was a one-of-a-kind person who made you feel important and special. You can never replace a man like that."

Said kicker Matt Stover: "I truly believe that the Super Bowl XXXV team would have never been as good as it was without Tony. He not only plugged up the middle, but his locker room presence created a loose environment when things were tight. He will be missed, but not forgotten."

Teammates will remember Siragusa for his notorious practical jokes.

There was a time when some of the younger players made a big pot of cocoa in the training room and Siragusa saw an opportunity to spike it with laxative before practice. Siragusa laughed as players rushed off the field.

"They say there is a person like you everywhere, but I believe God made one Goose with that personality," former Ravens defensive tackle Larry Webster said.

In the first "Hard Knocks," Siragusa delivered one of the top moments when he barricaded the tight ends in their meeting room with a table. Sharpe famously declared he wanted "restitution," and he stole Siragusa's truck in order to get an apology.

Siragusa's commitment to his team was apparent in 2000, when he was blocked, fell to the ground and couldn't feel part of his body. His mother came running down from the stands and his older brothers sprinted to the locker room where a golf cart had moved the motionless big man.

"From my head down, I couldn't move," Siragusa recalled later. "It was the scariest thing that's happened to me in my life."

The medical staff told Siragusa he had to at least have an MRI to make sure there wasn't spinal damage. He had a bruised spine, and he was advised not to go back. But he didn't heed that advice.

Said Siragusa: "[Defensive line] coach Rex Ryan came up to me and said 'You've got a family. Don't go back out there.' I said, 'You're my family, too. I've got to do this.' "

After his retirement, Siragusa was a sideline analyst for Fox Sports from 2003 until 2015. He also had some acting roles, appearing in "The Sopranos" and Spike Lee's movie, "25th Hour."

"This is a really sad day,'' Siragusa's broadcast agent, Jim Ornstein, told The Associated Press. "Tony was way more than my client, he was family. My heart goes out to Tony's loved ones.''

Siragusa's death continued a sad day for the Ravens, which announced the death of outside linebacker Jaylon Ferguson earlier in the day. He was 26 years old.

"This is a tremendously sad day for the Baltimore Ravens," Ravens owner Steve Bisciotti said. "We appreciate everyone who has expressed an outpouring of support for our players, coaches and staff."

More in this category: « McIlroy rips some LIV golfers for their about-face Bednar: Nothing wrong with Kadri's game winner »
back to top