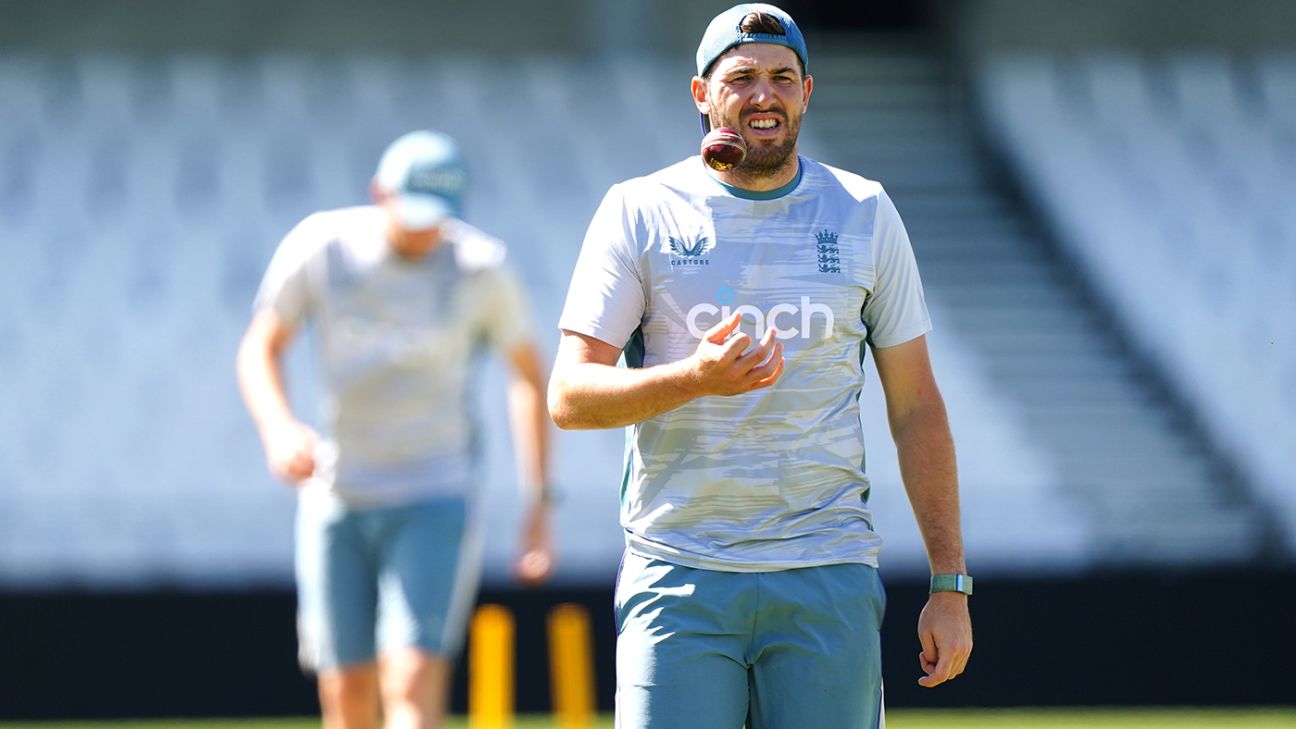 Jamie Overton has been a long, long time coming. Having impressed at U-19 level a decade ago, and been first called up to an England squad in 2013, and despite being a near-permanent presence on England's radar, he only makes his England debut today, at Headingley.
The pace has always kept them interested but, this season, a confluence of events has finally thrust him into the limelight proper. England are missing, through injury, nearly an entire XI of fast bowlers, but Overton's performances this season for Surrey mean he would've been beeping brightly on that radar in any case.
He has been the standout English fast bowler on the circuit; his strike rate of 38.3 is bettered only by his twin brother Craig (min. five matches), but it is - again, still - the pace that has people cooing. He's picked up a decent haul of wickets, but there's been as much excitement about the hustle and threat of his bouncers. In some dispatches he's said to have been 10mph quicker than any other bowler around him.
It is in stark contrast to the desperate struggle of last season, in which Overton picked up six wickets at 75 in eight games. The inconsistency has been a theme but, this season, under the watchful eye of Azhar Mahmood, there are signs that may be changing.

Mahmood has quietly built up an impressive coaching career, with international experience with Pakistan burnished by stints in the Pakistan Super League - most recently as head coach at Islamabad United. As an interim assistant coach at Surrey, he has taken on Overton as a personal project and early results, after a little technical tweaking, have been spectacular.

"The first thing we did with him was to reduce his run-up," Mahmood says. "We reduced it from 24 yards or so that it was before to around 18 now. He was losing momentum when he was running in for those last strides to the popping crease, where you actually have to build that momentum up."

Because of that loss in momentum, Mahmood explains, he wasn't following through towards his target properly. "When you drive your hip through in the action, you transfer weight and bring your hip forward, for the follow-through. He was stopping a little but if you watch now, he gets closer to the batsman. He is taller at the crease now."

Mahmood is meticulous when it comes to thinking through bowling actions, though he's careful to not tinker too much. His phone is a video treasure trove of bowlers and bowling actions from his work around the world; little tips that he's given them, minor tweaks he's made, hours he's spent just watching and logging.

He identified Overton's run-up as a prime cause for the inconsistency in his release and action, which would result in him often straying down legside. But pre-season work brought some immediate results. After shortening the run-up, Mahmood asked Overton to note how many balls he bowls down the legside. Overton bowled to Hashim Amla in the nets one day for half an hour and Mahmood remembers only two balls that Amla could play through the legside. Amla was impressed and wondered whether Overton could sustain that consistency.

"Now you can see, it's half a season gone and he's been sustaining it," Mahmood said. "Because of his pace that inconsistency can creep in. At that pace, a good day can be a great day, but a bad day a very poor one. If you're slightly off line at that pace, you go for runs. Jamie's getting that consistency now. He's still a work in progress. That will keep going. But this season I think people have seen the best of him."

Mahmood remembers, in particular, Overton's first game this season. Having been rested for tactical reasons for Surrey's season-opener, Overton blew away Hampshire with an eight-wicket haul at The Oval. The performance had all the classic really fast-bowling dismissals: an outswinger that hit the stumps, bouncers from round the wicket, yorkers and then, a sustained short-pitched attack in the second innings. The speed gun, Mahmood says, clocked him at 92mph at one point.
The one wicket he recalls, though, is from the Somerset game: Matt Renshaw bowled from over the wicket, leaving a full ball that swung in late and quick. "Danday uraa diye [blew away his sticks]," Mahmood says.
Mahmood has been almost as excited by Overton's batting this season, not least in a game against Kent where he watched in awe as Overton hit a 92-ball 93. He sees a bit of himself in the batting: Mahmood hit three Test hundreds, all against strong South African attacks, two in South Africa and from seven and eight in the order. He averaged nearly 32 in first-class cricket.

"I spoke to him about his batting," he says. "I said you remind me of myself, you have exactly the role I used to have. To help build an innings lower down in the order. I said to him this is the role. With that batting this guy can be one of the best allrounders in the world.

"I really haven't done that much with him. Jamie Overton is special. He is a diamond. All we've done is to cut and polish him a little."

More in this category: « Heather Knight hits on the right recipe for Test cricket Sam Cook torpedoes Middlesex after Dan Lawrence, Tom Westley set up Essex »
back to top