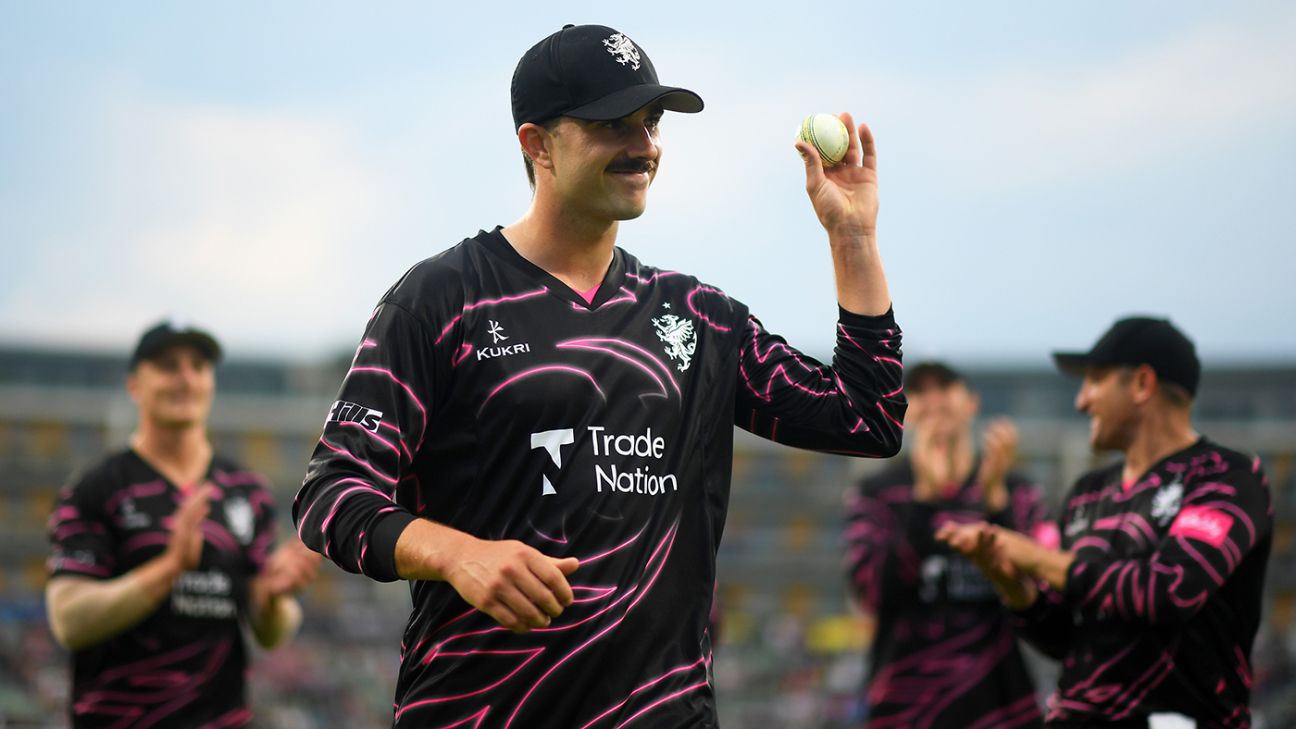 Somerset put themselves one step closer to qualification for the Vitality Blast quarter-finals with a 16-run win over Glamorgan in Cardiff.

Persistent rain reduced the match to a seven-over contest with Glamorgan putting Somerset into bat. Early wickets pegged the visitors back but some powerful blows from Tom Abell and Ben Green took Somerset to 75 for 6.

Just as was the case with the Somerset innings, Glamorgan suffered early losses as they got the chase underway. Unlike Somerset they did not have the late acceleration to get them to their target with Colin Ingram playing a lone hand to finish on 37 not out.

Victory takes Somerset to 16 points, and while a quarter-final isn't a mathematical certainty they are extremely well placed.

Once the match got underway Michael Neser gave Glamorgan the perfect start with the ball. Somerset lost the wickets of Tom Banton and Rilee Rossouw from consecutive balls, both batters dismissed for golden ducks. Banton attempted to scoop a length ball to the boundary and it crashed into his stumps. Rossouw pulled a shorter ball into the hands Sam Northeast at midwicket.

Somerset's batting efforts received another blow in the second over, Will Smeed chipped a ball from Michael Hogan to Andrew Salter at mid-off for 3. His wicket meant that Somerset were 7 for 3 inside the first two overs.

Prem Sissodya's first over also brought a wicket, Lewis Gregory edging behind to wicket-keeper Alex Horton for 7 to leave his side 15 for 4. The second over from Sissodya contained two boundaries before he bowled Tom Lammonby for 18 to leave Somerset at 41 for 5 with two overs to go.

Michael Hogan almost claimed his second wicket of the night when he came back into the attack when Abell hit a drive high into the Cardiff sky. Kiran Carlson was the fielder and he couldn't hold on to what would have been a very impressive catch.

Abel and Green were impressive in the final two overs, putting on 34 runs in 13 balls at the end of the Somerset innings.

Glamorgan's pursuit of the 76 run target got off to a poor start, Northeast becoming the third player to be dismissed first ball when he edged Craig Overton through to Banton. David Lloyd fell the following over, bowled by Peter Siddle for just 1 to reduced Glamorgan to 17 for 2.

Dan Douthwaite, promoted up the order in this shortened game, lasted four balls before be holed out on the boundary edge for just 3 with Green picking up the wicket. Green's impressive all-round performance continued in his second over when Kiran Carlson edged him through to Banton for 7.

Ingram and Eddie Byrom where left with 38 runs required from just 12 balls. That equation became 32 from 11 when Byrom smashed Josh Davey for six but the Glamorgan batter was trapped lbw the very next ball.

Ingram swung manfully in the final over but there was too much left to do with Somerset claiming their eighth win of this Blast campaign.

More in this category: « Pacers, openers put WI ahead after Bangladesh fold for 234 despite Litton's half-century Warwickshire land long-term target as Ed Barnard signs three-year deal »
back to top