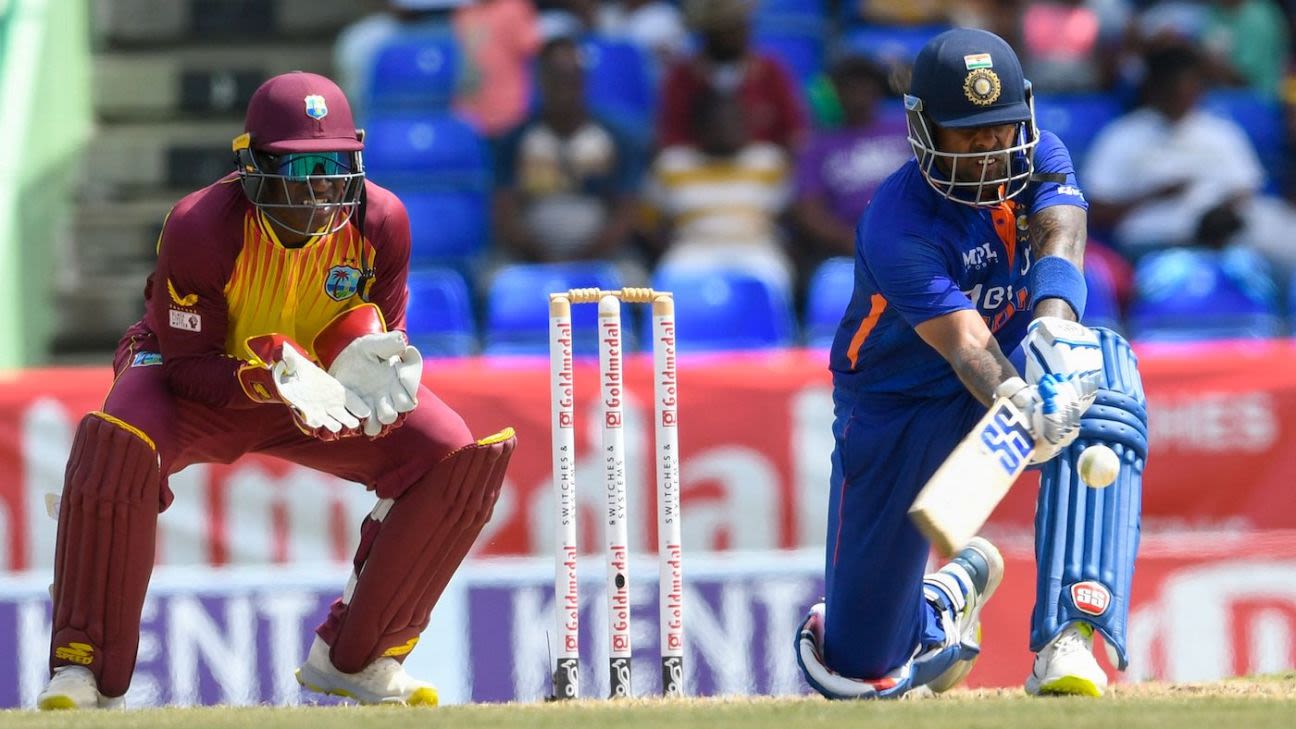 It has been 12 years since cricket officially and formally made it to the USA, with a weekend of two T20Is between New Zealand and Sri Lanka. For various reasons, though, Florida hasn't yet emerged as the cricket destination the administrators would have expected it to. This weekend's two matches between West Indies and India will make it only 12 matches played between Full Members there.
However, if the two teams can put on the kind of entertainment they did six years ago - when 245 batting first played 244 in the chase - it will go some way towards establishing Florida as a cricketing outpost. These two are the ideal teams to draw crowds in, what with the high number of immigrants from their parts of the world in America's Sunshine State.
For the two teams, these matches could well be the last look they get before they name their squads for the T20 World Cup in Australia. So it will be a good test for Arshdeep Singh and R Ashwin, on a small ground, to stake their claims for the back-up spots.

West Indies know their best combination less well. The wizards of T20 cricket have to play the qualifiers at the World Cup. Who knows if Andre Russell will be fit and if Sunil Narine will be picked. For various reasons, Sheldon Cottrell, Fabian Allen and Evin Lewis are also missing the games against India. With the series on the line, this is a good opportunity for the fringe players to push into the squad.

Deepak Hooda has not set a foot wrong this year, but he still can't force his way into the first-choice XI for India when everybody is available. However, he still has time to force his way into the squad, and into the XI should one of the batters struggle in the World Cup.
Nicholas Pooran, the most established T20 batter in the West Indies line-up, struggled to score at a-run-a-ball against the cutters of Hardik Pandya and the offspin of Ashwin in the third T20I. He will have to face more of it if there is any grip in the pitch, and he will have to find a way.
A lot of focus will be on Rohit Sharma's fitness after he retired hurt with back spasms in the third T20I. He has missed more matches than he has played since assuming full-time captaincy, and India will not want to risk a serious injury so close to the World Cup. He will play only if fully confident of his fitness. On the bowling front, India could go full-strength by picking Harshal Patel over Avesh Khan, who has not had the best of series.

A bowling allrounder in Dominic Drakes instead of a batting allrounder in Odean Smith is the composition West Indies are likely to stick with. They could, however, bring in Smith for wicketkeeper Devon Thomas, with Pooran donning the big gloves.

The pitch can be an unknown at venues not used to hosting international cricket regularly, but the boundaries are small and there should be good value for shots. There is no big threat to the matches except for the odd passing shower.