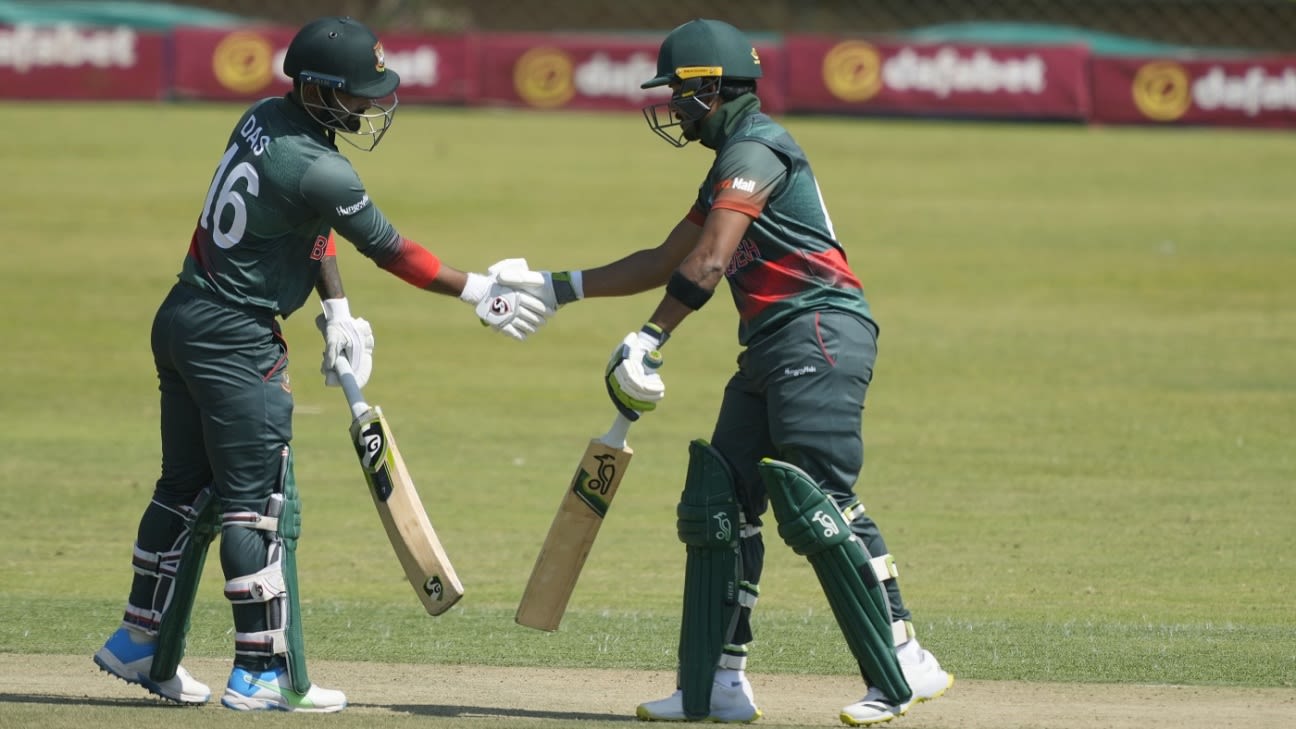 Bangladesh rode on four half-centuries from Tamim Iqbal, Litton Das, Anamul Haque and Mushfiqur Rahim to make 303 for 2 in the first ODI in Harare. But the visitors would feel that they couldn't push on in the last five overs, in which the Zimbabwe bowlers crawled back into the contest by allowing just 39 runs.

This is the first time that Bangladesh have crossed the 300-run mark in 50-over cricket while losing only two wickets. It was generally smooth sailing after Tamim and Litton gave them a good start despite being sent in to bat during an early morning start. The pair struck 62 and 81 respectively, adding 119 for the opening partnership, their second 100-plus stand this year, and fourth overall. The openers' good start was followed up by Anamul's 73, but his was a more rapid knock, with six fours and three sixes.

Tamim found a lot of his fours in the arc between third man and cover. But he scored equally on both sides of the wicket, and when he moved to 57, he became the first Bangladesh batter to reach 8,000 runs. He has already been the first to the previous three milestones (5,000, 6,000 and 7,000), but his joy was short lived when he skied a catch off Sikandar Raza for 62.

Litton reached his seventh ODI fifty in the 30th over and celebrated it with three consecutive fours off Wellington Masakadza. He struck Richard Ngarava with a swivel-pull in the following over, before hitting Victor Nyauchi for a straight six and four. It was looking like Litton had found peak rhythm but, shortly afterwards, he pulled his hamstring while taking a quick single and was stretchered off the field and into a nearby hospital for scans.

Anamul kept up the pressure on the Zimbabwe bowlers, reaching his fifty off 47 balls, faster than Tamim and Litton. He got to the mark with a straight six off Milton Shumba. It was his first half-century for Bangladesh in eight years.

So good has Anamul's one-day form been that this was his sixth consecutive fifty in the format, having struck three centuries and nine other half-centuries this year alone. His 1,138 runs for Prime Bank Cricket Club in last season's Dhaka Premier League is a world record for most runs in a List-A tournament.

But Bangladesh, after making 51 in the five overs from the 41st to 45th, made only 39 in the next five as Zimbabwe's seamers made up for their earlier profligacy with pin-point yorkers.

Zimbabwe, who were already feeling the pinch of playing with an inexperienced bowling line-up, lost Ryan Burl's services in the 21st over when he suffered a side strain while fielding.

The home side ended up using eight bowlers, without much luck, as they kept looking to break Bangladesh's big partnerships.

More in this category: « Full Members concerned over idea of nine overseas players per XI in UAE league George Hill's maiden List A hundred condemns Worcestershire to third straight defeat »
back to top