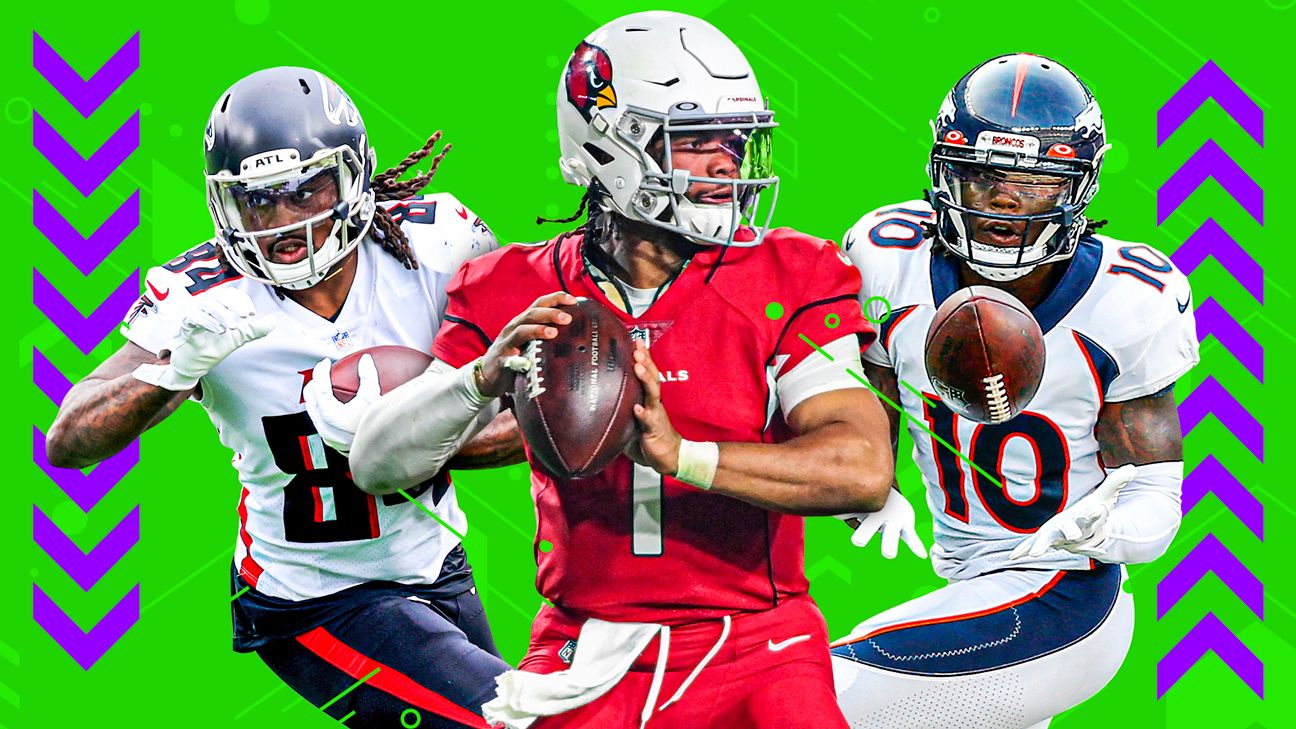 As we enter into the heart of fantasy football draft season, the ESPN Fantasy Football experts are here to bring you their latest sleepers, busts and breakout players for the 2022 campaign, as defined here:

Each analyst named a sleeper and a bust for each of the major offensive positions, as well as one breakout candidate. You can find their picks below, and their analysis and insight on a selection of players they felt most passionate about in each category.

Stephania Bell: Matt Ryan: Ryan will be the fifth starting quarterback in as many years for the Colts, and reaction to his change of locale has been mostly tepid. But why? Yes, he's 37 years old, but his 14 years in the league show he's durable (he has missed just one game in his 12 years as a starter) and an experienced decision-maker who can get the ball to his receivers quickly (another trait already on display at minicamp). He showed in OTAs his arm is still strong, and he'll play behind a better offensive line; instead of scrambling for his life behind the line of scrimmage, he can actually get the ball out on time. Earlier delivery gives the offense an advantage, leading to increased opportunities for Ryan's receivers, especially when it comes to YAC ... all of which translates to fantasy points.

Mike Clay: Joe Burrow: Burrow enjoyed a breakout 2021 season in which he paced the NFL in completion percentage and yards per attempt (YPA), while finishing no lower than eighth in passing yardage and TDs. And yet he finished eighth in fantasy points, with a ridiculous 47% of those points coming in three games -- his only weekly finishes better than eighth on the season. Burrow didn't add much with his legs (118 yards, 2 TDs), and that will need to change just to offset inevitable YPA regression to the mean. Yes, Burrow is emerging as one of the league's top quarterbacks, but that has yet to translate to the high-end QB1 fantasy output that his ADP suggests.

Eric Karabell: Travis Etienne Jr.: Fantasy managers just need to forget about last season's dysfunctional clown show that was the Jacksonville Jaguars and see all the potential in a new, competent coaching staff with a tantalizing, young offense. Trevor Lawrence will thrive with his college buddy Etienne, a 2021 first-round pick and the Jaguars' new lead back, healthy after a lost season. Etienne boasts Alvin Kamara characteristics as a runner and pass-catcher. He's fast, elusive and a terrific receiver, and injured James Robinson is way behind Etienne in terms of September readiness. Etienne has RB1 upside right now, but he's going in flex range. Be prepared to jump a round or three to go get him.

Kyle Soppe: Javonte Williams, Denver Broncos: The idea of this exercise is to evaluate not only players but our user drafting patterns, and my decision to fade the talented sophomore is based on the latter. I love the upside, but I don't love having to bank on that sort of growth out of my third-round pick. The Broncos not only brought in Russell Wilson to bolster the pass game; they also re-signed Melvin Gordon III. There's no question Gordon is on the back nine of his career, but six straight seasons with at least eight rushing scores is rare air. "Rare" as in here is the list of players who have ever done that: LaDainian Tomlinson, Jim Brown, Adrian Peterson and Emmitt Smith. The top 15 RBs in terms of total points last season scored, on average, 12.1 touchdowns, and the presence of Gordon on this roster, not to mention a potentially more open offense to cater to Wilson, makes it tough to assume Williams reaches that threshold. Love the talent, hate the price.

Eric Moody: Chris Olave: The Saints moved up from the 16th to the 11th spot in the 2022 NFL draft to select Olave. He'll be a star in New Orleans. The time is right to go all-in on a rookie wide receiver. Olave stands out among the six receivers selected in Round 1. He's a fluid route runner who ranks third in Ohio State history with 176 receptions and fifth in receiving yards with 2,711. Olave was able to accomplish this while playing alongside fellow first-round pick Garrett Wilson and projected 2023 first-rounder Jaxon Smith-Njigba. Olave's talent and position with the Saints, who desperately need help at wide receiver, certainly justify selection at his ADP. Olave could lead the team in targets.

Tristan H. Cockcroft: Allen Robinson II: His arrival in L.A. both strengthens the Rams' passing game and gives him a fresh start coming off a disappointing 2021, but it also lands him in a supporting role. For all the Odell Beckham Jr. comps, bear in mind that Beckham was fantasy football's WR32 with a 33rd-ranked 17.1% target share during his Rams tenure, a touchdown-dependent player for our purposes. Robinson should have his share of productive games, but if he's going among the top 25 at his position, he's too pricey for my tastes.

Matt Bowen: Cole Kmet: Kmet caught 60 of 91 targets last season. And we know the pass-catching traits are there to see the ball in Chicago's new offensive system with quarterback Justin Fields entering his second pro season. It's the anticipated red zone usage, however, that puts the third-year tight end in the mix for a potential breakout season. Kmet saw a total of just 12 red zone targets last year, with only six end zone targets. And he failed to log a single touchdown. But with tight end Jimmy Graham now out of the picture, there's an open door for Kmet to see a boost in scoring opportunities -- which would push him into the TE1 discussion.

Joe Kaiser: Darren Waller: Waller was limited to 11 games due to injury last season, causing his numbers to plummet compared to the season before, when he finished with 107 receptions, 1,196 yards and nine touchdowns. Waller turns 30 in September, and the addition of Davante Adams over the offseason means the Raiders have one of the premier -- and highest-paid -- receivers in the NFL. While Adams will take some defensive attention away from Waller, he's also going to take away targets.

Field Yates: Darnell Mooney: Mooney has already stated his case as a budding star after finishing in the top 20 in both receptions and receiving yards last season. Among all players with at least 80 catches, Mooney's 13.0 yards per catch ranked fourth, behind only Cooper Kupp, Justin Jefferson and Ja'Marr Chase. Decent company. He's a potential big-play threat with an obvious path toward massive volume, and I'm a firm believer that he and Justin Fields will take a decided leap forward this year. They've spent extensive time training together this offseason.