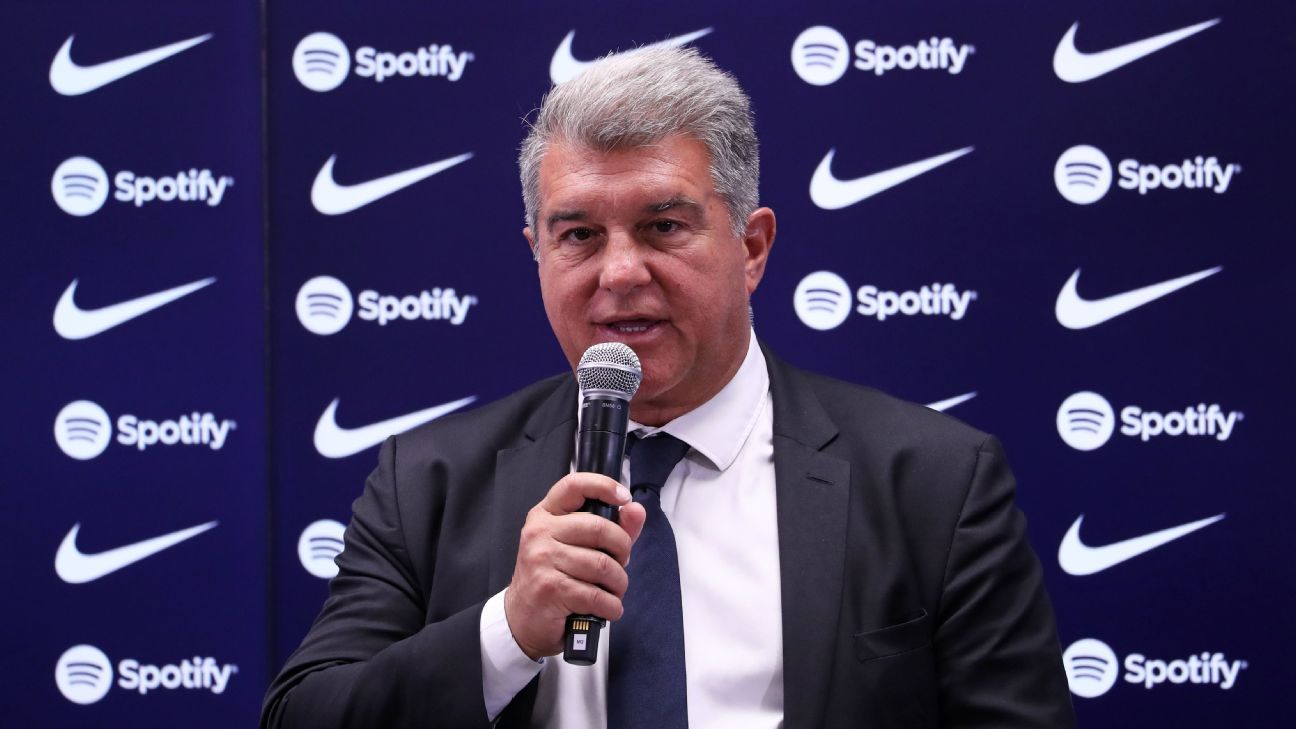 Barcelona have sold a further 24.5% of Barca Studios to Orpheus Media for €100 million in a bid to register all their new signings for Saturday's LaLiga game against Rayo Vallecano.

Barca have seven players unregistered heading into the first game of the season, but sources say they are hopeful the situation can now be resolved.

LaLiga will review the documents to see if everyone, including €45m signing Robert Lewandowski, can now be registered.

- Stream every LaLiga match on ESPN+ (U.S. only)
- LaLiga team-by-team preview: Can Barca return to top?
- Notebook: Barca not only LaLiga club with registration issues
- Don't have ESPN? Get instant access

Barca might still need to slightly reduce their wage bill to ensure everyone is available to face Rayo, but that could be done through an adjustment to Gerard Pique's salary, with talks at an advanced stage.

It is the fourth "financial lever" Barca have pulled this summer. They previously sold 24.5% of Barca Studios to Socios.com and vended 25% of their domestic television rights to Sixth Street for 25 years in two separate deals worth over €500m.

Barca had hoped the deals with Socios.com and Sixth Street would allow them to inscribe all of the players signed in the transfer window with LaLiga.

They were in talks with GDA Luma to sell another 24.5% of Barca Studios, but as talks stalled, they had to look elsewhere this week.

Orpheus Media is owned by the Catalan businessman Jaume Roures, who also helped Barca president Joan Laporta come up with the guarantee to become the club's president in March 2021. The Catalan club have spent over €150m on Lewandowski, Raphinha and Jules Kounde, while Franck Kessie and Andreas Christensen have arrived on free transfers.

Meanwhile, Sergi Roberto and Ousmane Dembele have signed new contracts, but neither deal has yet been ratified by the Spanish league.

Barca dealt with a similar scenario last year, when Memphis Depay and Eric Garcia were registered on the eve of the campaign after Pique accepted a pay cut.

The three levers pulled so far this summer, a league source confirmed to ESPN, would have allowed Barca to register some of those seven players, although who and how many would have depended on the combination.

A club source said Barca's preference was always to be able to register all the players at the same time. There is optimism that will now be possible, and in addition to the deal with Roures, talks are ongoing with Pique and Sergio Busquets over further wage cuts to make salary space.

Barca must comply with LaLiga's spending limit. It was -€144m at the end of last season, the only negative cap in Spain, but following the sale of assets this summer, it should rise significantly for the new campaign.

Barca Studios is the club's in-house production company but is also branching out, and the Blaugrana said the deal with Socios.com earlier this month will also "accelerate the club's audiovisual, blockchain, NFT and Web3 strategy."

More in this category: « Fury to 'walk away' after comeback flirtation How to watch the Tour Championship on ESPN+ »
back to top