RB Barkley on return to form: 'This is guy I know' 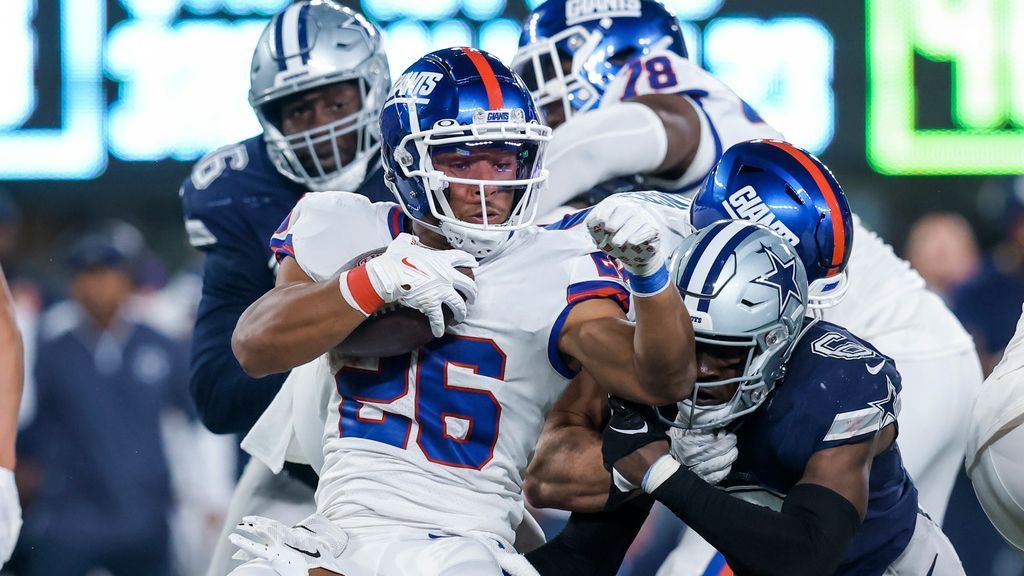 East Rutherford, N.J. -- The rookie year version of New York Giants running back Saquon Barkley has returned. He can see it when he watches film of himself the first three weeks of this season.

Barkley is second in the NFL with 317 yards rushing and two touchdowns on a healthy 6.0 yards per carry.

"Yeah, not to be arrogant but when you see plays like when I went back and watched film on the touchdown run I had on Monday, making that jump cut inside a hole, making those two guys miss and finding a way to score, those are plays where it just puts a smile on your face when you're like, 'That is the guy I know,'" Barkley said on Thursday of his 36-yard touchdown run against the Cowboys.

Barkley was named Offensive Rookie of the Year after compiling over 2,000 total yards in 2018. But he's struggled to stay healthy since. He's been limited the past three seasons by ankle injuries and a torn ACL in his right knee.

Even when Barkley played last year (13 games), he wasn't himself. It's something he's been open and honest about this year. He lacked confidence in himself and his body, specifically the surgically-repaired knee.

"That is the guy who was always there," Barkley said of his return to form this season. "He was there last year to be completely honest. I just had a hard time finding a way to bring him out. That is coming with a mental disconnect, loss in confidence and just human nature. It happens. You're going to have your ups and downs in life, but you have to find a way not to waver and trust yourself. Continue to trust the process and find belief in yourself again. I feel like I'm starting to do that."

Barkley had -44 rushing yards over expectation last season, according to NextGen Stats. That stat considered him a below-average back.

Not this year. Barkley leads all running backs with 112 rushing yards over expectation through three games.

The No. 2 overall pick in 2018 has his confidence back. It was evident on Monday night against the Cowboys, when the Giants called that third quarter run. It was a play they had run earlier, but Barkley wasn't happy with the result of a six-yard gain.

"I know I missed it before, and [quarterback Daniel Jones] was like, 'Hit that motherf---er," Barkley said. "We hit it and we scored. Just little stuff like that is coming back. Just the trust in it."

It will be on full display again Sunday when the Giants (2-1) host the Chicago Bears at MetLife Stadium. It was when these two teams met late last season where Barkley insists he got back on track.

"Last year is when I really felt the hurdle everyone wants to talk about, I kind of felt that was the hurdle for me last year," Barkley said. "Obviously we didn't finish the last game last year -- we didn't play well at all as a team. For that one, to go back to Chicago, the place where I tore my knee, to have a 100-yard game, obviously it's all about the team, but to look at it from my mindset, to go to that place that kind of put everything in the past for me and be able to go into the offseason healthy. I was able to show glimpses of that, especially inside running. I just wasn't breaking long runs and now that I have that confidence back all that stuff is starting to happen again."

More in this category: « From Tagovailoa-Waddle to Burrow-Chase, college chemistry paying off for six QB-receiver duos in the NFL Source: 49ers CB Moseley tore ACL in left knee »
back to top