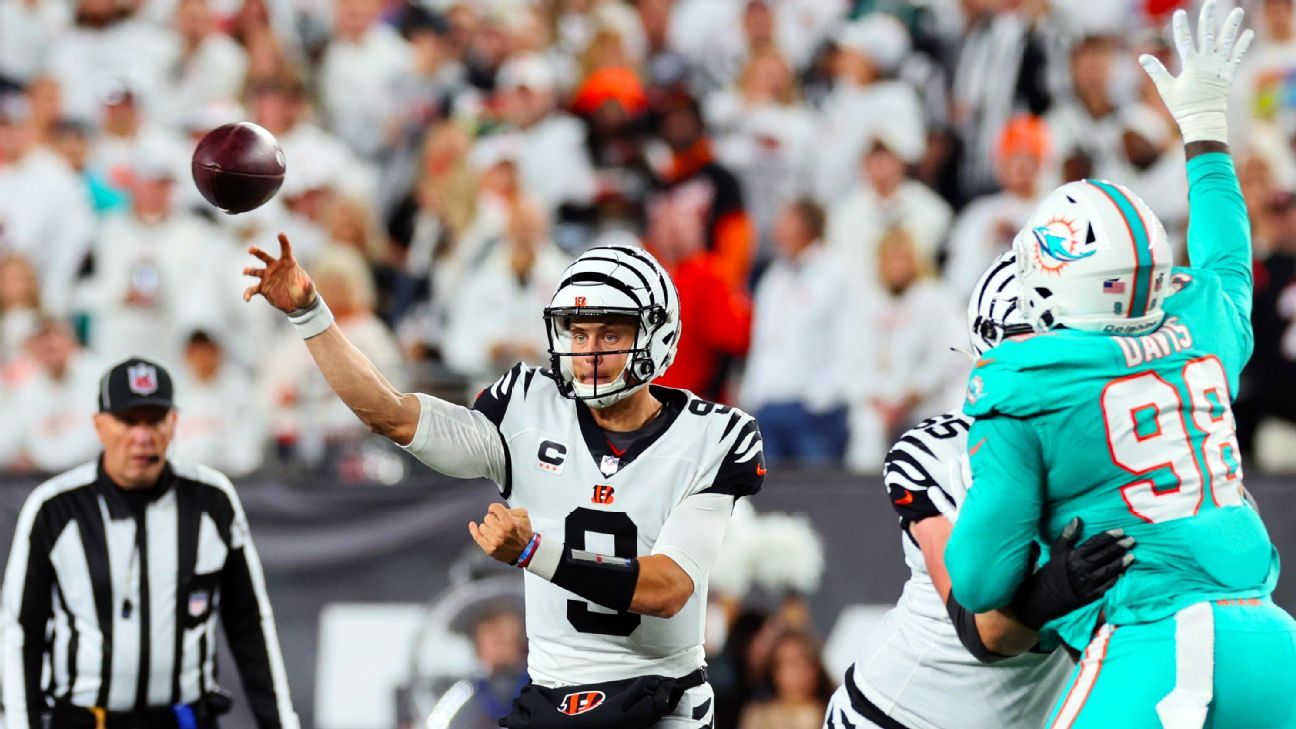 CINCINNATI -- The Cincinnati Bengals beat the Miami Dolphins 27-15 on Thursday night, but a head and neck injury suffered by Dolphins quarterback Tua Tagovailoa in the second quarter was the story of the game at Paycor Stadium.

Thursday night's game between the Bengals (2-2) and Dolphins wasn't pretty, but Cincinnati was able to gut out a victory in the end.

Cincinnati won't be complaining about how it got the win, however. The Bengals opened the season with back-to-back losses. As in Week 4 last season, Cincinnati ended up with a tough game on its hands, at home, on "Thursday Night Football." And like last year, the Bengals did just enough to pull out a much-needed win.

Describe the game in two words: Prime-time malaise. On a showcase night for the Bengals, Cincinnati was a bit sluggish but was still in the mix to pull out another win on "Thursday Night Football."

Sell a breakout performance: Bengals running back Joe Mixon looked good early on the team's opening drive when he picked up steady chunks of yards and scored his first rushing touchdown of the season. But over the course of the game, Mixon's production trailed off. It took 17 carries for Mixon to hit 50 yards, which isn't the efficiency Cincinnati's coaching staff wants for its rushing attack. In the fourth quarter, Mixon was stuffed on third-and-goal at Miami's 1-yard line.

QB breakdown: Cincinnati quarterback Joe Burrow didn't have one of his better showings against Miami, and the proof is in the NFL Next Gen Stats. Excluding throws behind the line of scrimmage, Burrow completed his first 10 passes of 10 or fewer air yards. On intermediate throws between 10 and 19 air yards, however, he missed on his first five attempts. Burrow was able to overcome any struggles with some deep passes that moved the offense, including a 59-yard touchdown pass to wide receiver Tee Higgins.

Troubling trend: Well, let's talk about the offense again. For the third time in four games, things didn't look great for Cincinnati. Fans inside Paycor Stadium booed the offense on a couple of different occasions. There were a couple of bright spots, but the lethargic showing for the first three quarters will be disconcerting for those hoping the Week 3 win against the New York Jets meant the offense was turning the corner. -- Ben Baby

Underrated statistic to know: The Bengals have scored an opening-drive touchdown for the second straight week. They had two opening-drive TDs all of last season.

The Dolphins lost to the Bengals in their first prime-time game of the season, losing their title as the AFC's last unbeaten team in the process.

But none of that felt particularly important.

Not on a night when Dolphins quarterback Tua Tagovailoa was immobilized and taken off the field on a stretcher after suffering head and neck injuries that sent him to the hospital. It marked the second straight week Tagovailoa was forced out of a game after hitting his head on the ground, although he was designated with a back injury last week.

The Dolphins said Tagovailoa was conscious and had movement in his extremities at the University of Cincinnati Medical Center. According to a report from the broadcast, he was expected to be released and travel back to Miami with the team.

QB breakdown: While preparing for the possibility of Tagovailoa not being available for Thursday's game, coach Mike McDaniel said situations like these are why you sign a veteran like Teddy Bridgewater in the first place. At this stage of his career, Bridgewater is more of a game manager than someone who will go out and drive an offense. His highlight was a 64-yard pass to Tyreek Hill that put Miami deep in the red zone. He also threw a costly interception late in the fourth quarter.

Breakout performance: Raheem Mostert took a commanding grasp on the Dolphins' backfield with 69 rushing yards on 15 carries. He has looked like the team's best back for the past three weeks and was rewarded with the primary share of the workload, out-touching Chase Edmonds, who had five carries for 6 yards and two catches for 14 yards. Edmonds also dropped an early touchdown, strengthening Mostert's claim to the lead-back role. Expect him to lead the way moving forward until he no longer has the hot hand. -- Marcel Louis-Jacques

Underrated statistic to know: With a 64-yard reception in the third quarter, Tyreek Hill already has as many 60-yard receptions this season (2) as he did over the past two seasons (one in 2020, one in 2021).

More in this category: « Follow live: Unbeaten Dolphins in Cincy facing a Bengals team with something to prove Source: 49ers CB Moseley tore ACL in left knee »
back to top