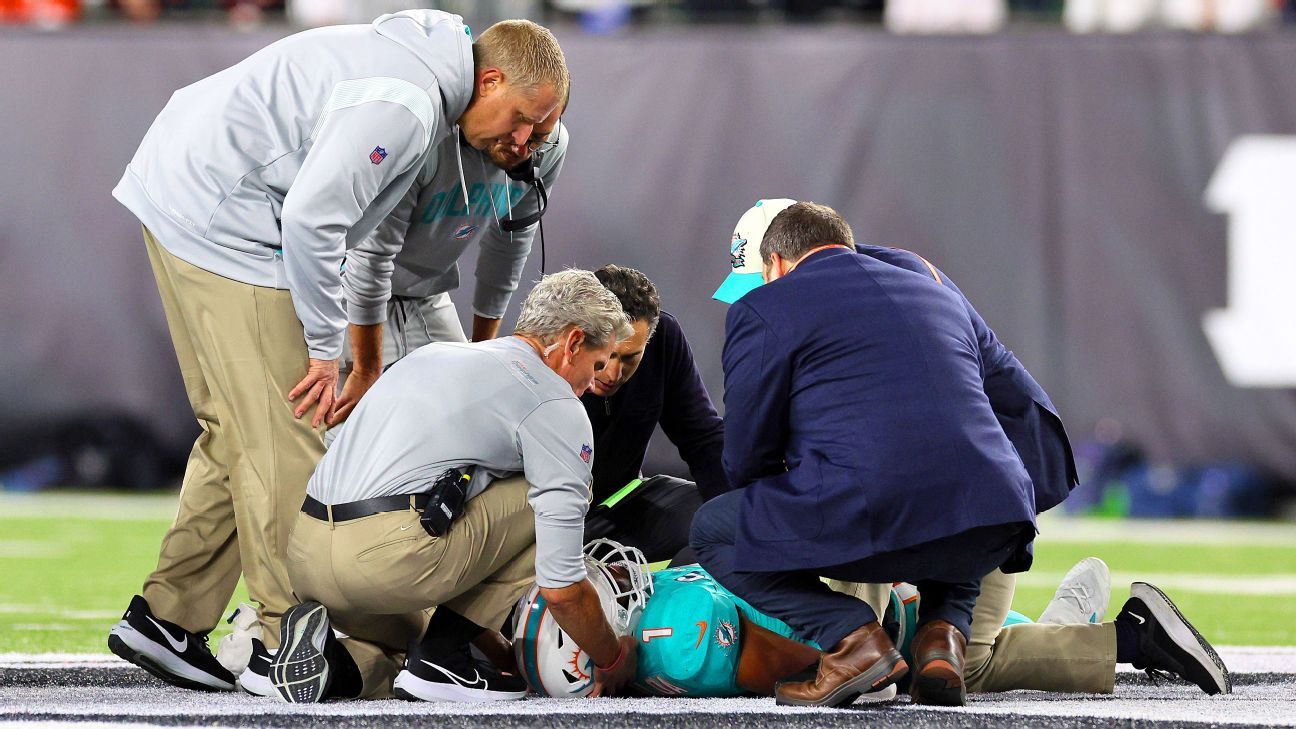 CINCINNATI -- Miami Dolphins quarterback Tua Tagovailoa was taken to a local hospital with head and neck injuries suffered on a second-quarter sack in Thursday night's game against the Cincinnati Bengals.

Tagovailoa hit the back of his head on the ground when he was sacked by Bengals nose tackle Josh Tupou, and his arms appeared to seize up almost immediately. He remained on the field for roughly 10 minutes before he was loaded onto a stretcher and taken away.

The Dolphins said shortly before halftime that he was conscious and had movement in all his extremities at the hospital, the University of Cincinnati Medical Center. After the game, they said Tagovailoa was expected to be released from the hospital Thursday night and travel back to Miami with the team.

The entire Dolphins team gathered at midfield as he was taken off, and the crowd chanted, "Tua! Tua!"

In Sunday's win over the Buffalo Bills, Tagovailoa underwent concussion evaluations at halftime after he hit his head on the ground and then stumbled while trying to return to the huddle. The team initially listed him as questionable to return with a head injury but later said it was a back injury that caused him to stumble. Tagovailoa said later in the week that he passed every evaluation he took before ultimately returning to the game.

The NFL Players Association requested a review of the NFL's concussion protocols following Tagovailoa's quick return to the game.

"Player health and safety is at the core of the union's mission. Our concern tonight is for Tua and we hope for a full and speedy recovery. Our investigation into the potential protocol violation is ongoing," the NFLPA said in a statement after Tagovailoa was hurt Thursday night.

Dolphins coach Mike McDaniel said Monday that his players' health is something he doesn't take lightly, that the team would comply with any review or investigation and that he felt "fine" with the whole process.

"The one thing I think our players know more than anybody, there's certain things that I'm very sensitive to. I've been called emotional from time to time, and one of those things is player health," McDaniel said. "So I don't mess around with that at all. ... They went through the protocols and in that process during the game, and it was something that we wouldn't have moved forward in the direction we did, had there been any sort of red flags because that's -- you can't keep quarterbacks out of harm's way so you wouldn't -- if he had a head issue, he wouldn't have been back out there."

Tagovailoa, 24, was listed as questionable with a back injury for most of the week ahead of Thursday night's game.

Before leaving the game, Tagovailoa was 8-for-14 for 110 yards and an interception.

Teddy Bridgewater entered in Tagovailoa's place and finished 14-for-23 for 193 yards, a touchdown and an interception in the 27-15 loss. The Dolphins had rookie quarterback Skylar Thompson active for the first time in his career, as well.