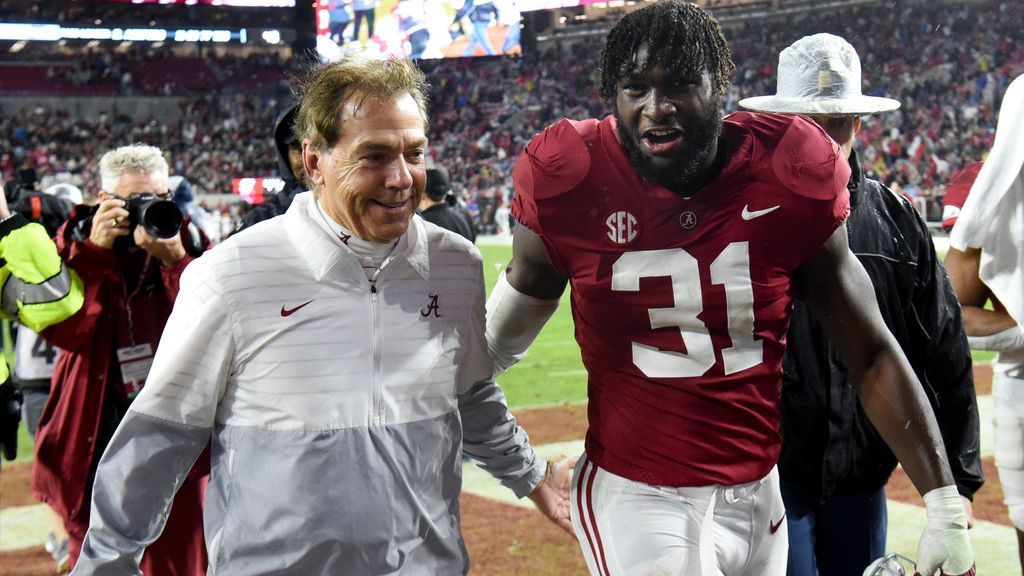 TUSCALOOSA, Ala. -- Nick Saban wasn't sure who had won or lost around the country after Alabama's 49-27 rout of Auburn on Saturday, but he is sure that his team at least deserves consideration for one of the four sports in the College Football Playoff.

The Crimson Tide, who've been to every CFP but one since its inception in 2014, would be the first two-loss team to make the playoff and would clearly need help to get there.

"I don't make those decisions, but I know what a resilient football team this has been," Saban told ESPN. "We've lost two games to top-10 opponents, both on the last play of the game and both on the road. We could have easily won both games but didn't. We're a good football team and hopefully people will recognize that and we'll get a chance."

Alabama has incurred a few scars along the way, whether it was quarterback Bryce Young's shoulder injury, uncharacteristic penalties and mistakes or a defense that gave up a total of 84 points in the two losses. The Tide lost 52-49 at No. 10 Tennessee on a last-second field goal and 32-31 in overtime at No. 5 LSU when the Tigers succeeded in a 2-point conversion.

"We've had a lot of close games, didn't always play our best in those games, but did enough to get to 10 wins and hung in there as a team," Saban said. "I guess we will see what happens now."

Saban was sporting his own scars after the game. He was accidentally struck in the face by a player's shoulder pads during a play on the sideline. His left cheek was bloodied and he had a gash on his face.

"Man, that's the third time I've been hit this season. I never used to get hit and I saw stars after this one," said Saban, who joked that he took the toughest hit of the game and didn't even go to the injury tent.

Saban said one of the differences in Alabama's team now is that Young is as healthy as he has been after hurting his right throwing shoulder against Arkansas and not playing against Texas A&M. His first game back was against Tennessee on Oct. 15.

"Bryce has played great, but he went a month where he really couldn't practice," Saban said. "He was able to come in and play at his same level, but we probably weren't able to grow as much around him as we would have if he had been able to practice more. He's healthy now, and that makes us a different team."

Alabama (10-2) was No. 7 last week in the latest College Football Playoff rankings. The Tide are going to need things to fall just right to climb into that top four, but were helped by Clemson, Ohio State and Oregon all losing Saturday. A TCU loss in the Big 12 championship game would also help as well as USC losing in the Pac-12 title game.

Big Ten commissioner Kevin Warren said Saturday after Ohio State's loss to Michigan that "without a doubt" the Buckeyes deserve a spot in the playoff. Saban, asked if he would lobby for Alabama, said, "Look, if I think it will help our team, I'll certainly do that. I haven't really thought about it to this point. So, you know, my whole focus was to win this game. That's the best opportunity we had for anything good to happen for us."

Saban said one of the things that kept Alabama focused this season was the negativity surrounding the team, which also won two games in the final seconds against Texas and Texas A&M. This is only the fourth time since Saban arrived in 2007 that Alabama has lost two games in the regular season, and he suggested that maybe some fans were simply spoiled.

"A lot of the things that were written and said about this team really united the players," Saban said. "They would say things like, 'This is all we have, but all we need is the people in this room.' ... We have great fans and a great stadium and a great atmosphere tonight and we appreciate it and I appreciate that, and I know our players do as well. But people who are negative and naysayers, if they support the University of Alabama, you are hurting the university or hurting the program because it's a reflection on our culture and how positive we are. And this program was built on positive."

Saban noted that Alabama had 95,000 fans coming to the spring game when he first got the job.

As far as any questions about the culture on this Alabama team, Saban said those usually crop up when people are being critical.

"The culture of the program here is just as good as it's always been, and the players compete just as well as they always have," Saban said. "So I don't think there's anything wrong with the culture here. We lost two games by four points. Nobody feels worse about that than me and the players who've made a tremendous commitment to try to win those games in tough places on the road."