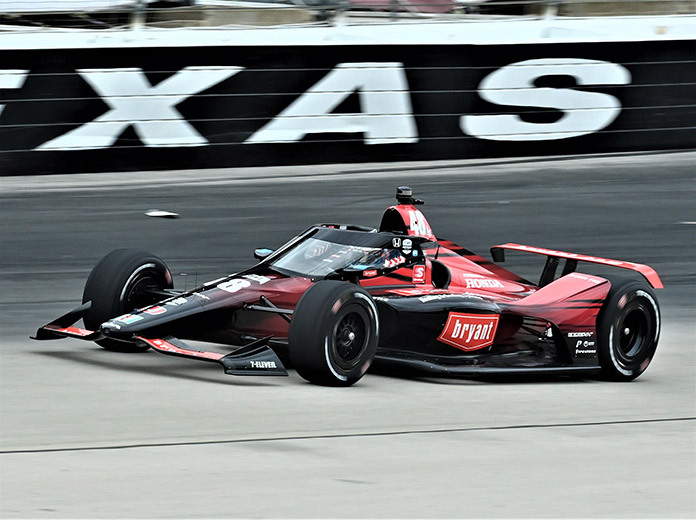 FORT WORTH, Texas – Starting near the back of the field because of entrant points, Tony Kanaan is one driver that wishes Saturday’s qualifications at Texas Motor Speedway had not been canceled.

Kanaan, making his return to the NTT IndyCar Series for the first time since the second race of a doubleheader at World Wide Technology Raceway in Madison, Ill., on Aug. 30, was the fastest in Saturday’s rain-delayed practice.

Kanaan’s fast lap in the No. 48 Bryant Heating and Cooling/American Legion Honda was 220.173 mph around the IndyCar-measured 1.44-mile Texas Motor Speedway.

Chip Ganassi Racing’s six-time NTT IndyCar Series champion Scott Dixon was fourth at 219.723 mph in the No. 9 PNC Bank Honda with Team Penske’s Simon Pagenaud rounding out the top-five at 219.708 mph in the No. 22 Chevrolet.

Because of persistent moisture that kept the racing surface from drying, Saturday’s practice was delayed for nearly two hours. That delay led IndyCar Series officials to scrap Saturday’s qualifications and adjust the schedule.

Kanaan will start 23rd based off the entrant points earned by Jimmie Johnson in the first two races this season.

More in this category: « Massive Field Turns Out For Thunder Road Practice Day Two More For Dotson During California IMCA Speedweek »
back to top