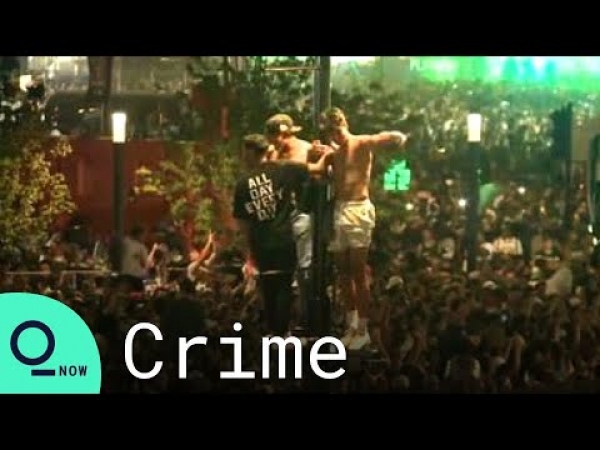 Milwaukee Crowds Flee From Gunshots During NBA Finals Celebrations
Two shootings in downtown Milwaukee early Wednesday as crowds celebrated the Milwaukee Bucks' first NBA championship in 50 years left three people wounded, police said. The shootings both happened about 12:42 a.m. at two locations near Water Street, police said in a statement. TV station WISN had a reporter broadcasting from the scene when multiple shots were heard, prompting people to flee. The shootings were across the Milwaukee River from Fiserv Forum, where the game was played, and the Deer District plaza, where a crowd of roughly 65,000 had gathered for an outdoor watch party. The area where the shootings took place is on a street heavily populated with bars and restaurants. During Tuesday night's game, a police officer was trampled by people trying to get into the Deer District watch party after the area had reached capacity, Milwaukee police Capt. Jesús Ortiz said in an email. The officer didn't sustain any major injuries, but reported being in general pain, Ortiz said. Following one of the shootings, a 22-year-old man had non-life threatening injuries, police said, and a suspect was in custody. In the other shooting, which police said happened simultaneously, a 19-year-old woman and a 32-year-old man had non-life threatening injuries. One person was in custody and other suspects were being sought, police said. The two shootings, which were in the immediate area of the celebrations, likely were what was heard during the TV coverage, Ortiz said. The celebrations came after Giannis Antetokounmpo capped one of the greatest NBA Finals ever with 50 points as Milwaukee beat the Phoenix Suns 105-98 to win the series 4-2. Subscribe to our YouTube channel: https://bit.ly/2TwO8Gm Subscribe to our newest channel Quicktake Explained: https://bit.ly/3iERrup Bloomberg Quicktake brings you live global news and original shows spanning business, technology, politics and culture. Make sense of the stories changing your business and your world. To watch complete coverage on Bloomberg Quicktake 24/7, visit http://www.bloomberg.com/qt/live, or watch on Apple TV, Roku, Samsung Smart TV, Fire TV and Android TV on the Bloomberg app. Have a story to tell? Fill out this survey for a chance to have it featured on Bloomberg Quicktake: https://cor.us/surveys/27AF30 Connect with us on… YouTube: https://www.youtube.com/user/Bloomberg Breaking News on YouTube: https://www.youtube.com/c/BloombergQuickTakeNews Twitter: https://twitter.com/quicktake Facebook: https://www.facebook.com/quicktake Instagram: https://www.instagram.com/quicktake
Read 8 times
More in this category: « Giannis’ closeout game wasn’t the best in Finals history - Stephen A. & Max agree | First Take Italy vs. USA | Tokyo Olympics 2020: Women's 3x3 Basketball Highlights | NBC Sports »
back to top