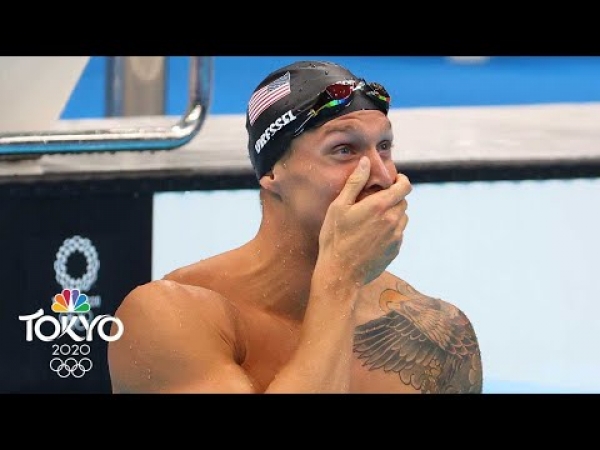 Caeleb Dressel wins gold, sets record in electrifying men&#039;s 100m free | Tokyo Olympics | NBC Sports
Caeleb Dressel set an Olympic record in the men's 100m freestyle, which was needed to hold off Australia's Kyle Chalmers and win his first individual Olympic gold. #NBCOlympics #Tokyo2020 #Swimming » Subscribe to NBC Sports: https://www.youtube.com/nbcsports?sub_confirmation=1 » Watch live Olympic coverage on NBCOlympics.com: https://www.nbcolympics.com/schedule Stay up to date on Swimming in Tokyo: https://www.nbcolympics.com/swimming Visit NBCOlympics.com,: https://www.nbcolympics.com Watch the Tokyo Olympics on Peacock: https://www.peacocktv.com/sports/olympics Download the NBC Olympics App: https://apps.apple.com/us/app/nbc-sports/id542511686 Find NBC Olympics on Facebook: https://www.facebook.com/nbcolympics Follow NBC Olympics on Twitter: https://twitter.com/NBCOlympics Follow NBC Olympics on Instagram: https://www.instagram.com/nbcolympics Each swimming event is broken up into rounds with the purpose of trimming the field of competitors (which can sometimes number upwards of 90+ for individual events) down to a final race of eight. Individual events at distances of 200m and shorter require three rounds: preliminary heats, semifinals, and a final. Each athlete participates in one of several preliminary heats in hopes of recording a top-16 time, thereby advancing to the semifinals. From there, the eight fastest swimmers across both semifinal heats advance to the final. Individual events at distances of 400m or longer, along with all relay events, do not include a semifinal round. In these events, only the top eight swimmers or teams across the preliminary heats advance to the final. In the event of a tie for the final lane in a semifinal or final round, tied competitors swim an additional head-to-head race to determine who advances. This is also known as a ""swim off"". Olympic swimming competition days generally contain two sessions: one for only preliminary heats, and a second for semifinals and finals. The exceptions are the first day of competition, which lacks a semifinal/final session, and the last day, which does not contain a heats session. NBC Olympics is responsible for producing, programming and promoting NBCUniversal’s coverage of the Olympic and Paralympic Games. NBC Olympics is renowned for its unsurpassed Olympic heritage, award-winning production, and ability to aggregate the largest audiences in U.S. television history. NBCUniversal owns the U.S. media rights on all platforms to all Olympic Games through 2032. NBC Olympics also produces thousands of hours of Olympic sports programming throughout the year, which is presented on NBC, NBCSN, Olympic Channel: Home of Team USA, Peacock and NBC Sports digital platforms. Caeleb Dressel wins gold, sets record in electrifying men's 100m free | Tokyo Olympics | NBC Sports https://www.youtube.com/nbcsports
Read 14 times
More in this category: « Biles will not compete in gymnastics all-around l WNT Messi dreams of Champions League crown with PSG »
back to top