Atletico's Jan Oblak on the art of the goalkeeper 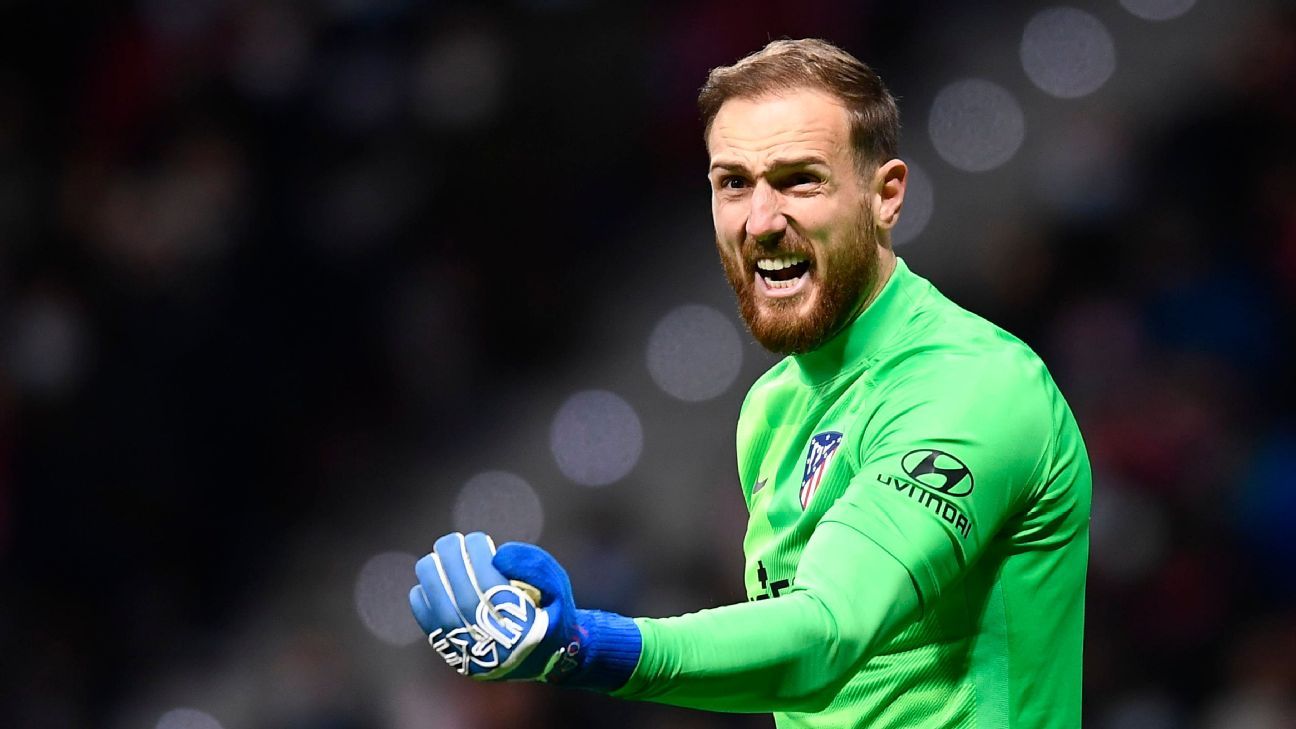 MADRID -- On a wet November afternoon at Atletico Madrid's training ground, Jan Oblak wants to set the record straight about some goalkeeping stereotypes.

"We're not crazy," he tells ESPN, moments after learning that he has been voted No. 1 male goalkeeper in this year's FC 100. "We're normal people. But we're special, we're different. I'm really happy I became a goalkeeper."

Oblak is nobody's idea of a goalkeeping maverick. The 28-year-old Slovenian comes across as polite, reserved, even a bit shy. But "normal" doesn't feel right either. After all, he made his professional debut at 16 and earned his first big move abroad at 17.

"Special" is more like it. "Different," too. Just ask Atletico fans who have spent the last seven years watching him make one miraculous save after another. Indeed, so good has Oblak been for so long that, when his form dips, it turns heads. It is the price you pay for consistent, relentless excellence.

Ask him about his role models, the players he looked up to as a child, and he does not name-check legends such as Gianluigi Buffon, Iker Casillas, Oliver Kahn or any other high-profile keeper from the 2000s. Instead, he talks about his dad, Matjaz.

"My father was a goalkeeper," Oblak says. "He played all his life. Since I was a young boy, I was always watching him. Behind his goal, throwing myself, diving to the left, to the right, to the side that he dived. My father helped me a lot. He never pushed me -- nobody said 'you should be a goalkeeper' -- but I decided that, probably because of my father, I wanted to become a goalkeeper like him."

Oblak's precocious rise to the top would have been dizzying if he was not so level-headed. In 2009, he became first-choice keeper for Olimpija Ljubljana, in Slovenia's second tier. After his first full season, he was signed by Portuguese giants Benfica.

"I started fast," he tells ESPN. "I played for the first team at 16 years old... When I left my country, I was one million percent sure, that was going to be that. One day I was going to be at a top club, to play in top competitions, to play great games against the biggest players in the world."

By the age of 20, Oblak was Benfica's No. 1. Six months later, he joined Atletico in a deal worth €16m, a Spanish record for a goalkeeper. But though Oblak was expected to replace Thibaut Courtois, recalled by Chelsea after a three-year loan, veteran Miguel Angel Moya, initially got the nod from coach Diego Simeone at the start of 2014-15.

Oblak was not helped by a disastrous Champions League debut against Olympiakos, in which he conceded three goals from four shots on target and did not play in Europe or LaLiga for six months after that. After such a setback, he kept his head down and waited for an opportunity.

"Talent is not enough to play at a big club," he says. "I've worked all my life, since I was a kid, I was always staying after training to go to another training (session) with the older guys... I know that there are a lot of things that I can do much more. This is a never-ending story, you can always improve, you can always be better. I think all professionals think like that."

Oblak finally played his first LaLiga game in March 2015 and has been Simeone's undisputed first-choice ever since. The numbers from the following season are jaw-dropping: 38 league games played, 18 goals conceded.

And he has since shown that 2015-16 was no one-off. In becoming Spanish football's most reliable stopper, he has won the Zamora trophy -- awarded for the lowest goals-to-games ratio -- a record-equalling five times: Every year from 2016 to 2019, then again in 2021.

There have been lows, including a 2016 Champions League final loss to Real Madrid, in which he failed to save a penalty in the decisive shootout, but many more highs. For example, a triple save against Bayer Leverkusen in March 2017, beating away the first shot before throwing himself to his left and then his right, is the most concise demonstration of goalkeeping greatness in the competition's recent history.

?⚪️? Jan Oblak against Leverkusen? Throwback to this sensational triple save in 2017 ?#UCL | @atletienglish pic.twitter.com/y2LRB9Nqz1

Still though, it has taken time for Oblak's international acclaim to match his reputation in Spain. In what feels like a goalkeeping golden age -- Alisson and Ederson in the Premier League, Courtois and Marc-Andre ter Stegen in LaLiga, Manuel Neuer in the Bundesliga and Ginaluigi Donnarumma in Serie A and then Ligue 1 -- it has not always been easy to stand out.

Atletico's LaLiga title win earlier this year, the club's first since 2014, helped in that regard.

"I think in the last few years (people) see the goalkeeper as more important than before," Oblak tells ESPN. "I think they really recognise that all teams now, if they want to have good results, they need to have a great goalkeeper. And they are always looking for more things, you need to play with your feet, you need to build up... I think it's really interesting. In the next few years for sure, goalkeepers are going to improve."

He is the goalkeeper with most appearances in Atletico history, but his contract is due to expire in 2023. In each of the last two summers, the club feared a Premier League giant might be tempted to pay its €120m release clause.

So what's next? One thing is clear: At 28, Oblak is still a relative youngster in goalkeeping years. As such, he laughs off the suggestion that this year represents a career high.

"Last season was great, (winning LaLiga) was amazing, but I know that I need to play like that all the time," he says. "I think in the seasons before I wasn't much worse than last season, but we won the title and that's really important, especially for individual awards. Like I said, it's a never-ending story. I hope that this is just the start. This is just the beginning of something big, of something great."

More in this category: « Inter's Eriksen trains with childhood Danish club Liverpool edge to win over wasteful West Ham »
back to top