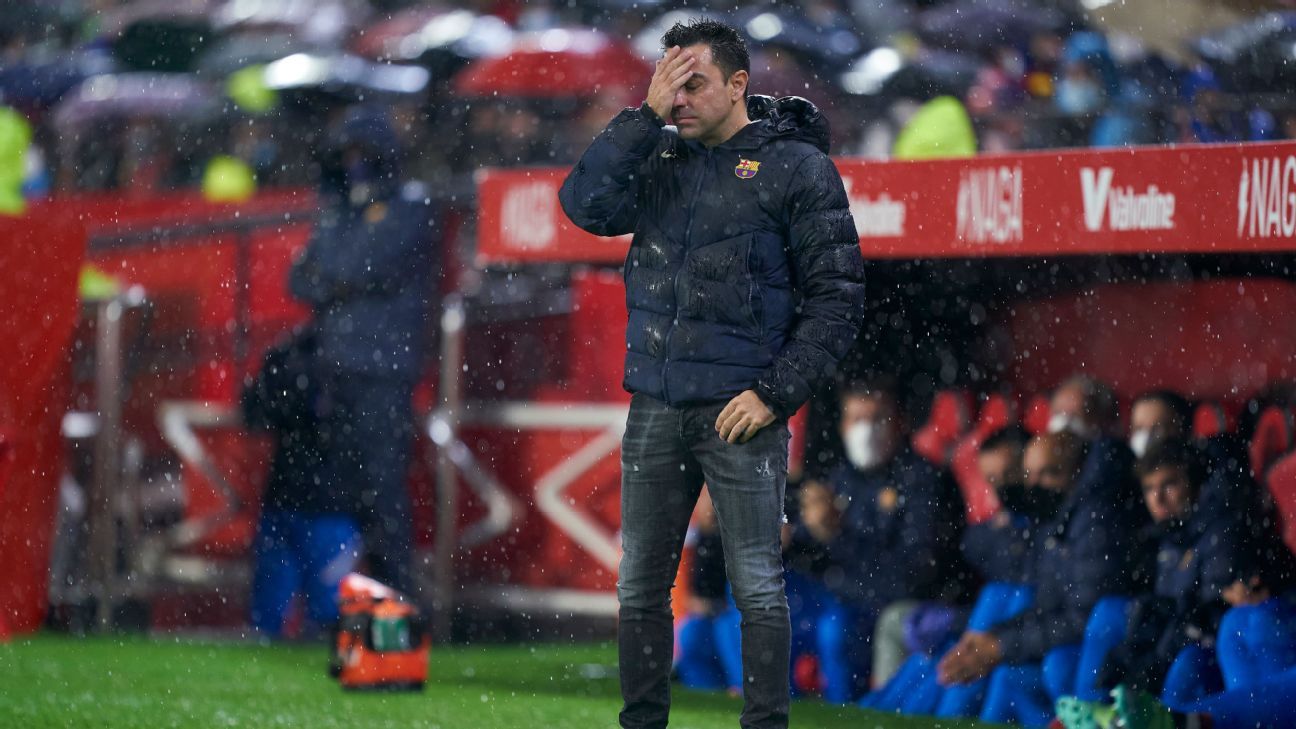 Barcelona have been struck by a COVID-19 outbreak to leave them struggling to field a team for Sunday's LaLiga game against Mallorca.

Ousmane Dembele, Samuel Umtiti and Gavi all tested positive for the virus on Wednesday to take the number of players isolating at the club to seven. Jordi Alba, Clement Lenglet, Dani Alves and Alejandro Balde had all tested positive earlier this week.

- ESPN FC 100: The top male players and managers of 2021
- Ronaldo to Barca? Why Spain have day of prank stories
- Stream ESPN FC Daily on ESPN+ (U.S. only)
- Don't have ESPN? Get instant access

Barca have said all seven players feel fine and are quarantining at home in line with the league's protocol.

Five more players -- Sergino Dest, Gerard Pique, Ronald Araujo, Philippe Coutinho and Neto -- will be tested later on Wednesday after receiving an extra day off over the Christmas period.

The outbreak leaves Barca extremely short heading into this weekend's game against Mallorca, their first match since a 1-1 draw with Sevilla on Dec. 21.

Sergio Busquets is suspended for the trip to San Moix on Sunday, as is Gavi, who has now tested positive for coronavirus.

Barca also have a lengthy injury list, with Dest, Sergi Roberto, Memphis Depay, Martin Braithwaite, Ansu Fati and Pedri all absent for their last game. Dest, Pedri and Ansu are all nearing a return to action, though.

New signing Ferran Torres, who completed a move to Camp Nou from Manchester City on Tuesday, cannot be officially registered until Jan. 3.

Mallorca, meanwhile, have said that they have detected four cases among their first-team squad and three more among coaching staff ahead of Barca's visit.

The Omicron variant of the virus has seen cases spiral in the Spanish top-flight.

Rayo Vallecano have said 17 first-team players have tested positive for COVID-19, as well as coach Andoni Iraola, and have requested this weekend's game against Atletico Madrid be called off.

Real Sociedad are among the other clubs hardest hit by the latest wave. They announced 10 cases within their first-team bubble on Dec. 27.

A LaLiga spokesman told ESPN there was "no news" regarding possible postponements this weekend, but the league have made their stance on games going ahead clear in the past.

Granada were forced to play a game against Sociedad last season after an outbreak. They ended the fixture with just four members of their senior squad on the pitch.

The Spanish Football Federation (RFEF) and league organisers had rejected Granada's request to postpone the game because they were able to field seven players from their first-team squad from the start. Rules state that matches can only be postponed if five or fewer first-team players are available.

More in this category: « COVID: Arteta tests positive, to miss City clash Liverpool edge to win over wasteful West Ham »
back to top