No formal charges filed against India for Newlands DRS bust-up 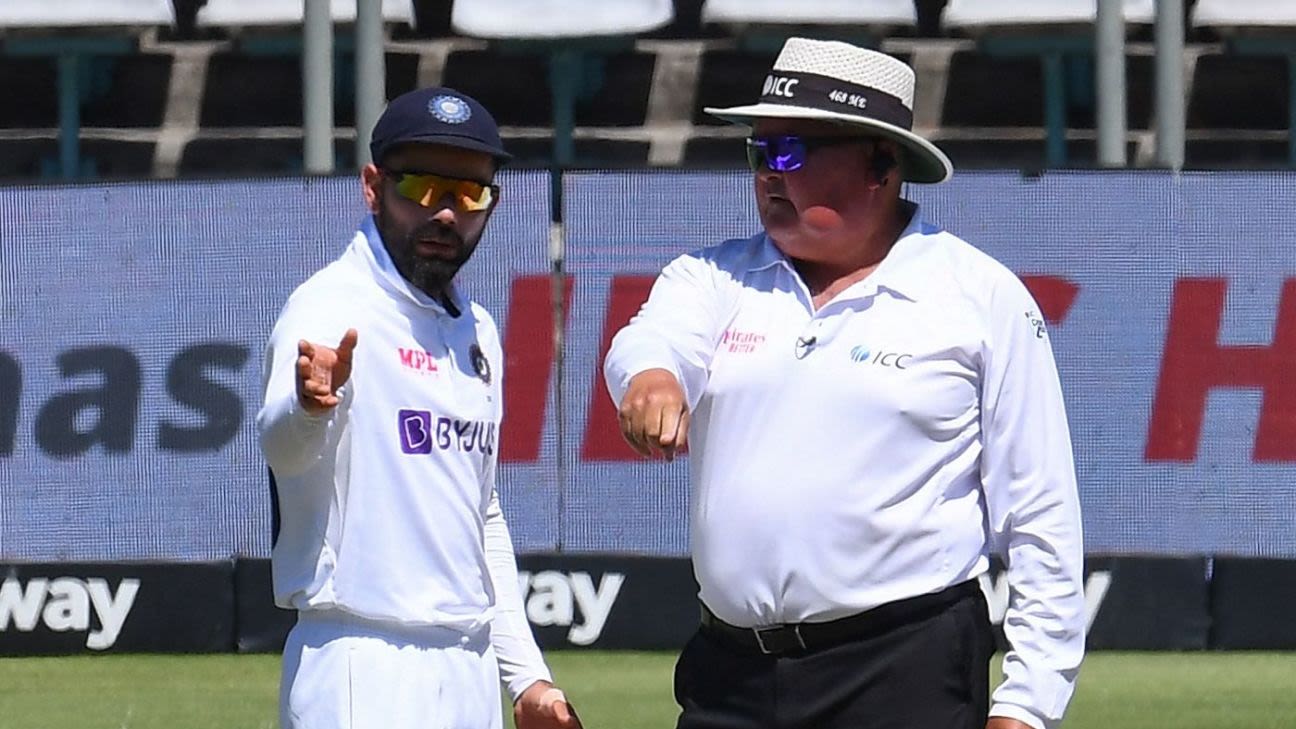 Virat Kohli and his India team-mates have been spoken to about the DRS bust-up on the third day of the Newlands Test by the ICC match officials, although no formal charge has been filed against any player.
ESPNcricinfo understands that the ICC's match officials had a word with the Indian team management cautioning them about their conduct after DRS had reprieved Dean Elgar from being given out lbw, but there was no official code of conduct breach charge levelled against India.
Kohli himself in his post-match press conference after the third Test, said that while he wouldn't comment about the stump mic picking up what he and his players said - sometimes directly speaking into it and addressing the host broadcaster SuperSport - he didn't think his team got carried away and ceded any advantage to the South Africans.
"We understood what happened on the field, and people on the outside don't know exact details of what goes on in the field, so for me to try and justify what we did on the field and say we got carried away is wrong," Kohli said.
"If we had gotten charged up and picked up three wickets there, that would have probably been the moment that changed the game. The reality of the situation is that we did not apply enough pressure on them for longer periods of time throughout the course of the Test match and hence we lost the game. That one moment seems very nice and very exciting to make a controversy out of, which honestly I'm not interested in making a controversy of it at all. It was just a moment that passed and we moved on from it, and just kept focusing on the game and trying to pick up wickets."
In the final session of the third day's play, Elgar was adjudged lbw on the field to R Ashwin. Elgar reviewed it however, and the projection from HawkEye - an independent body - showed Ashwin's delivery going over the stumps. That led to an outburst by several players, with a visibly annoyed Kohli going up to the stump mic and seemingly addressing SuperSport, saying, "Focus on your team while they shine the ball. Not just the opposition. Trying to catch people all the time."
Vice-captain KL Rahul added, "It's the whole country against 11 guys." And Ashwin seemed to be addressing the broadcasters directly when he said, "You should find better ways to win, SuperSport."
Elgar's reprieve came in the 21st over of the innings, with the South Africa captain batting on 22 and the team 60 for 1, chasing a fourth-innings target of 212. The Indian players were not the only ones who didn't agree with the decision. Marais Erasmus, who gave Elgar out on the field, could be seen shaking his head as the pictures played out on the screen at the venue, and was heard saying, "That's impossible".
Not everyone agreed with the Indian players' discontent and them pulling up the host broadcaster though. Among them was the pair of Sanjay Manjrekar and Daryll Cullinan, ESPNcricinfo's expert panel for the series. Manjrekar said he did not agree with the Indian camp's "insinuation" against the host broadcaster while Cullinan was more blunt, stating Kohli's behaviour was "unacceptable" and he had got away for "too long".
South Africa would end the over in which Elgar was reprieved on 60 for 1, but the next six overs brought 35 runs with a flurry of boundaries.
Elgar eventually fell to what turned out to be the last ball of the day, glancing Jasprit Bumrah behind. However, Keegan Peterson's 82 led South Africa to a seven-wicket victory to seal the Test, and the series by a 2-1 margin, on the fourth day
Virat Kohli
India
South Africa vs India
India in South Africa
ICC World Test Championship
Read 6 times

More in this category: « 'I am lost for words' - Mark Boucher on 'tough nut' Keegan Petersen's showing against India Pakistan Under-13 and Under-16 tournaments suspended over age fraud »
back to top