Auburn No. 1 for first time in history of AP poll 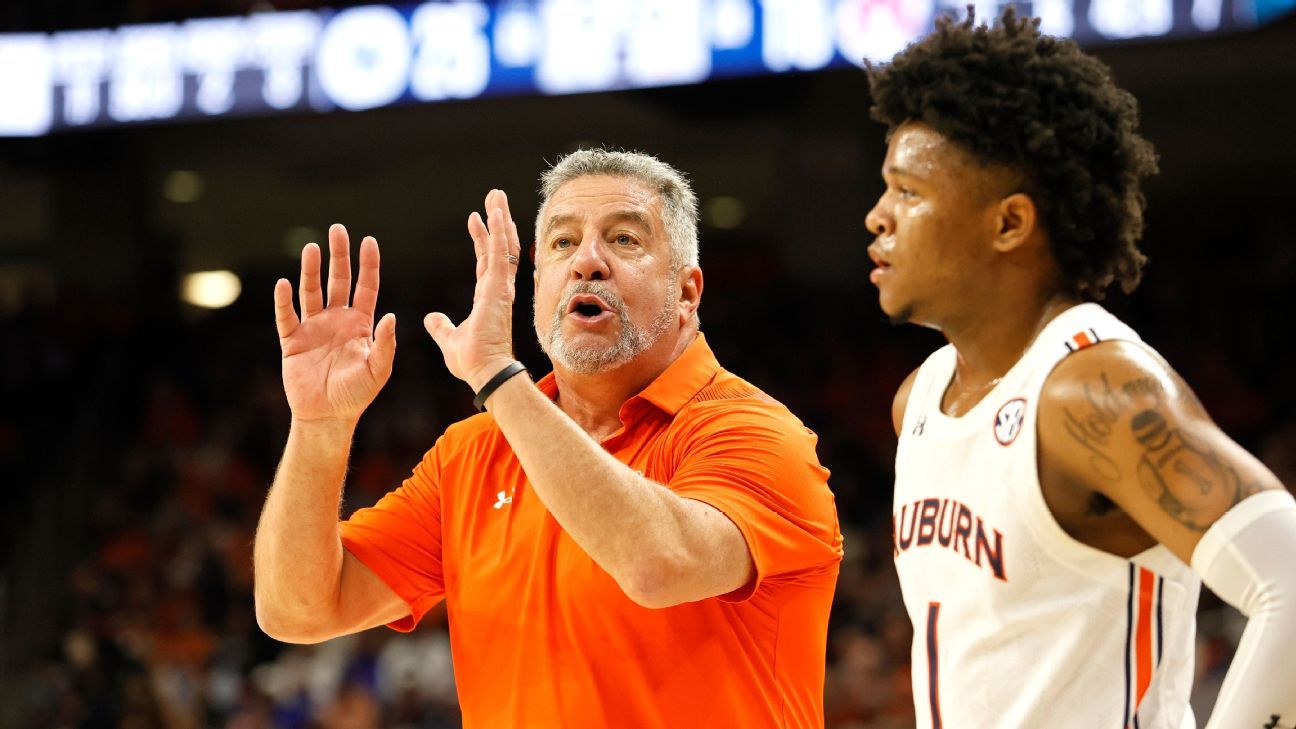 War Eagle is flying high over men's college basketball for the first time in history.

A barely ranked afterthought to begin the season, Auburn climbed past Gonzaga to No. 1 in the AP Top 25 poll released Monday. The Tigers beat Kentucky over the weekend for their 15th consecutive win, then scooped up 45 of 61 first-place votes to become the nation's top-ranked team for the first time since the poll began with the 1948-49 season.

The Bulldogs dropped to No. 2 with 15 first-place votes. Arizona remained third and earned the other No. 1 vote.

"I think for us, it's the sum of our parts," said Bruce Pearl, who led the Tigers to the Final Four in 2019. "If we're playing nine guys on a regular basis, or sometimes 10, you've got to account for all of them. And I thought [against Kentucky] we got really great contributions, you know, from everybody."

That includes the teeming crowd inside Auburn Arena, with the boisterous student section known simply as The Jungle, who are no doubt celebrating the return to prominence of a school known more for football than basketball.

But being No. 1? That's a whole new experience. The Tigers are the fifth team to reach that spot this season, following two stints by the Bulldogs and runs by Duke, Purdue and defending national champion Baylor.

The Bears rebounded from consecutive losses while ranked No. 1 to beat West Virginia and Oklahoma, and climbed one position to fourth. Big 12 rival Kansas was fifth after a pair of heart-stopping wins.

The Boilermakers fell two spots to sixth after losing to Indiana early last week. They were followed by Houston and UCLA, deadlocked at No. 7, with Duke and Michigan State rounding out the top 10.

The Spartans, unranked to start the season, blew out then-No. 8 Wisconsin last week and have lost only once since November.

"We got after it, and that's the way it had to be, and a lot of it falls on me, too," Michigan State coach Tom Izzo said. "I think we got some things accomplished last week."

The Badgers fell to No. 11 and were followed by Kentucky, Texas Tech, Villanova and Southern California, which bounced back from a loss to Oregon with wins over Colorado and Utah on the road.

Ohio State climbed three spots to give the Big Ten a fourth team in the top 16. Providence, Tennessee, LSU and UConn rounded out the top 20, while Xavier, Marquette, Iowa State, Illinois and Davidson completed the poll.

Stephen Curry's alma mater is ranked for the first time since spending a week at No. 24 in March 2015.

"We've got to learn lessons, and it seems every game has given us lessons to learn," Davidson coach Bob McKillop said, "and one of the joys of learning those lessons is we're learning them with victories and not losses."

Marquette returned to the Top 25 for the first time under Shaka Smart, landing at No. 22 after the Golden Eagles didn't have a single vote last week. That's what happens when you beat three straight ranked teams -- Seton Hall, Villanova and Xavier -- to run your winning streak to six heading into another showdown with the Pirates on Tuesday night.

Dropping out were Texas, which has lost three of its last five, and Loyola, which lost to Missouri State on Saturday.

Tennessee made the biggest leap this past week, climbing six spots to No. 18 following wins over Vanderbilt and LSU. Texas Tech and UConn both jumped five spots with the Red Raiders reaching a season-best No. 13 in the poll.

Iowa State tumbled the farthest, eight spots to No. 23, after losses to Texas Tech and TCU gave the Cyclones five in their last seven games. Illinois fell seven spots to No. 24 after losing a heartbreaker to Purdue and getting drilled by Maryland.

The Big Ten and Big East have five ranked teams apiece, followed by the SEC and Big 12 with four each. The Pac-12 has three and the ACC, American Athletic, West Coast and Atlantic 10 each have one.

More in this category: « ASU's Hurley suspended, fined after confrontation 49ers: Lance will start at QB 'sooner than later' »
back to top