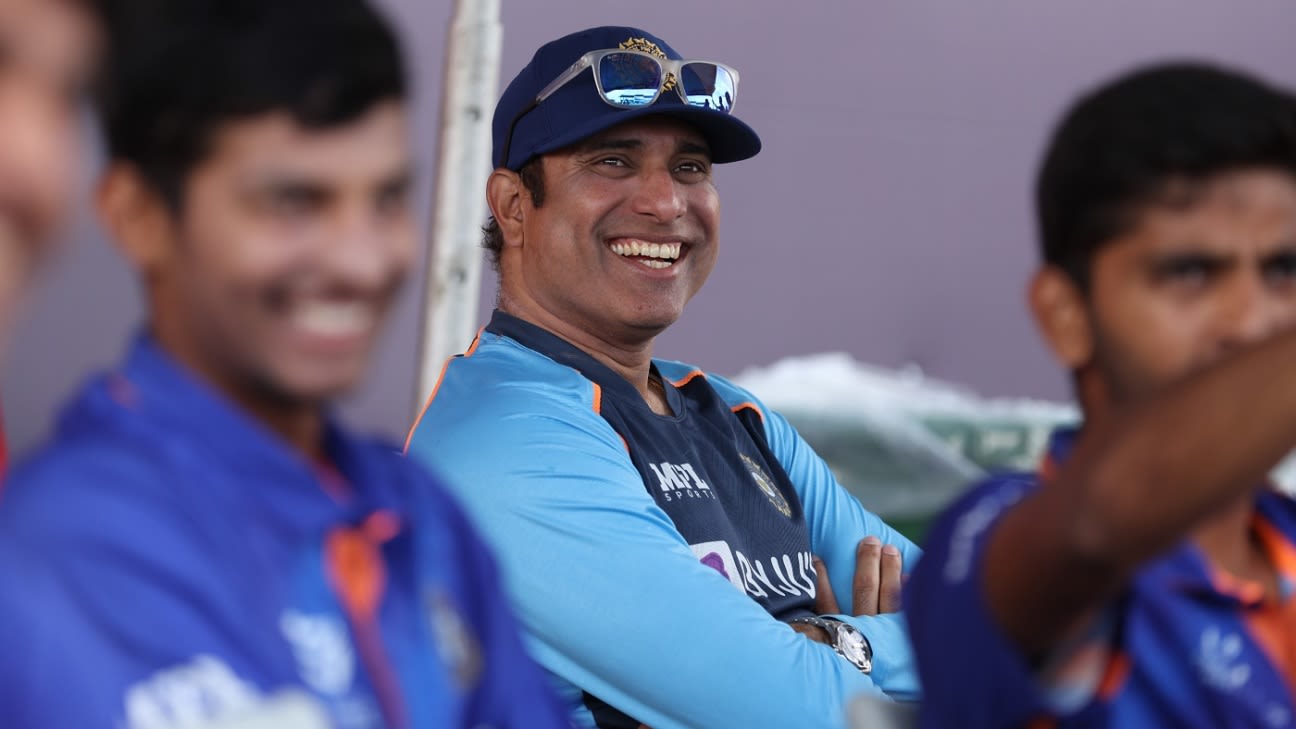 VVS Laxman hailed the "resilience and positive attitude" shown by India's Under-19 World Cup winners, after they overcame a mid-campaign outbreak of Covid-19 to outclass their battling England opponents in the final, winning by four wickets to lift the trophy for the fifth time in the tournament's history.
"In the middle of this tournament, we all know what happened to the boys," Laxman, the former India great who now heads their National Cricket Academy, told the host broadcaster. "To test positive, but to show that kind of resilience and positive attitude, was exemplary."
Yash Dhull, the captain, was one of six India players to test positive for the virus during the group stages of the tournament, alongside Nishant Sindhu and Shaik Rasheed, both of whom made half-centuries in India's successful run-chase in the final. That followed an exceptional effort in the field, led by Ravi Kumar and Raj Bawa, in which England were bowled out for 189 despite a fine 95 from James Rew.
"It's a proud moment to achieve something for India," Dhull said at the post-match presentation. "At first it was difficult to find our combinations in the tournament but then we became like a family. Sir [head coach Hrishikesh Kanitkar] made it a good environment and team strength was good."
After collapsing to 61 for 6 despite winning the toss, England made India work for their victory - first through the efforts of Rew, who found key support from James Sales in an eighth-wicket stand of 93, and then in a spirited defence of their sub-par total. The left-arm seamer Josh Boyden struck in his first over to remove Angkrish Raghuvanshi for 0, and when Sales grabbed two wickets in three balls in the middle overs, India were again vulnerable at 97 for 4.
"It was too exciting for my good, but I'm happy with the result," Kanitkar said afterwards. "But I think we learned a lot from this. [Dhull] led them very well, he has a good head on his shoulders, he read the game situation and what players would want, and I think that really counted today."
Tom Prest, England's captain, was one of the early wickets to fall as Kumar bowled him for a fourth-ball duck to end a fine campaign with the bat on a low note. But despite his disappointment, he was full of praise for the fight that his team had shown.
"Obviously choosing to bat first, we'd have liked a better start, but the way James Rew then batted to get 95 - he deserved a hundred - we got to a score that we felt we were in the game with, and I think we gave that a good crack.
"We've got a strong bowling attack and taking a wicket in the first over, that got the mood up and got some confidence going. But they obviously batted really well, they had a couple of great partnerships. So credit to them."
Dhull acknowledged that Rew and Sales had made India work for their win, but said his team had remained confident throughout. "Those two batted well and England made a good comeback, but we were cool in the chase," he said. "It was great for us that VVS sir, Hrishi sir, Sairaj sir, Bali sir, Harsha sir all joined us. Their words will help us all individually."
Despite falling at the final hurdle, Prest was still the first England captain to reach an Under-19 final in 24 years, and he was full of praise for the tournament experience. "It's been amazing," he said. "We've all really enjoyed it. Not only the cricket, the media exposure that we've got, and doing interviews like this. It's something that we'll never forget. And we're very proud of our achievements."
Kanitkar echoed Prest's sentiments. "I think it's a fabulous competition," he said. "Getting this stage to perform at young age. I think for all teams it's a great opportunity to showcase talent, and also for the academies all over the world. You get a lot of things you can work on now."
Laxman, whose own experience of Under-19 cricket predated the tournament's reboot in 1998, added that the players should recognise the importance of the achievement, but use it as a learning process first and foremost.
"This is just the start of their journey," he said. "Everyone in this group understands that, because this is all about development as players, as persons, and it's great to see the way they have developed and the way they've evolved over the last couple of months. It's very exciting time for all of them but it's just the start of their journeys as cricketers.
"Huge congratulations to the selection committee," he added. "It was a new selection committee and quite challenging to identify this group. The coaching staff, with Rishikesh as the head coach and all the support staff, the way they brought this group together, they worked really hard. They won the Asia Cup and the preparation to this World Cup was fantastic."
Asked what India is doing right at Under-19 level, Laxman said it was all about "structure".
"The BCCI has to be complimented for the number of matches and the number of tournaments," he added. "Each age-group level gets to play, whether it's Under-16, Under-19, Under-23. But unfortunately, over the last two years, because of Covid, they didn't play any tournaments. And that's why I think this tournament win is very special."
After the result, BCCI secretary Jay Shah announced an INR 40 lac prize for every player in the winning squad and INR 25 lac for every support-staff member. BCCI president and former India captain Sourav Ganguly also tweeted: "Absolutely breathtaking and tremendous skills under pressure."
VVS Laxman
Yash Dhull
Tom Prest
India
England
England U19 vs India U19
ICC Under-19 World Cup