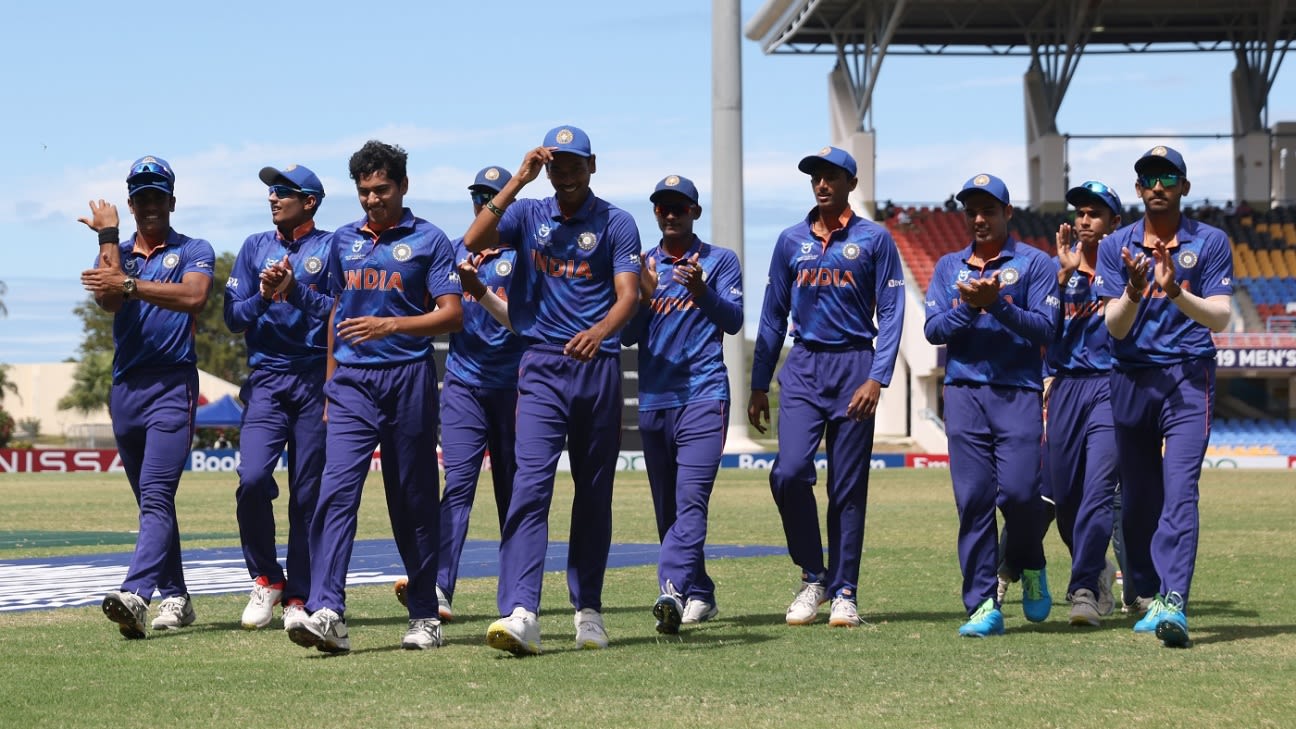 India 195 for 6 (Sindhu 50*, Rasheed 50, Boyden 2-24) beat England 189 all out (Rew 95, Bawa 5-31, Ravi 3-34) by four wickets
It was India's seamers, not spinners, who plotted England's downfall in the Under-19 World Cup final as Raj Bawa and Ravi Kumar produced match-winning bowling performances to share nine wickets and dismiss their opponents for 189. Bawa's 5 for 31 was the best bowling performance in an U19 World Cup final, while Ravi finished with 4 for 34.
Even though India won by only four wickets, they were always ahead of the chase. Shaik Rasheed hit a fifty, Nishant Sindhu finished unbeaten on 50, too, and Bawa made a crucial 35. And as it is often with Indians at World Cup finals, it was a wicketkeeper who hit a six to seal the World Cup title.
Although England did strike with wickets that prevented India from posting big partnerships, the modest target of 190 put very little pressure on them. That England even reached 189 was courtesy James Rew's valiant 95, which rescued them from 91 for 7 after Tom Prest chose to bat at the toss.
England's troubles started early when Ravi found some movement in the morning, assisted in part by some overnight rain in Antigua. He had Jacob Bethell lbw with a full ball in the second over and then had Prest chopping an attempted pull onto his stumps.
George Thomas, who scored a half-century in the semi-final, attacked right-arm seamer Rajvardhan Hangargekar from the other end even though Ravi was among the wickets early. He smacked Hangargekar for a 16-run over, only to fall for 27 off 30 when Bawa came on at first change. Bawa pitched the ball up, and Thomas tried to mow one across the line, only to miscue a skyer to cover.
Rew and William Luxton were left with the task of starting England's recovery, but they could last only 16 balls together as Bawa struck twice in consecutive deliveries. Bawa found some extra bounce to a wide-ish ball, and Luxton went chasing only to edge it to the wicketkeeper Dinesh Bana. George Bell was gone for a duck when Bawa welcomed him with a short ball for his very first delivery, and all he could do was glove it to Bana trying to block off the back foot. From 45 for 5, England were soon 91 for 7 following the wickets of Rehan Ahmed, caught at slip off Bawa, and Alex Horton, who dragged offspinner Kaushal Tambe to midwicket.
With England heading towards being bowled out for a sub-120 score, it was left to Rew, the last recognised batter, to add some runs. He joined hands with No. 9 James Sales to build a stand, and together they added 93 runs. Rew was the attacker in the partnership, increasing his tempo as England steadily edged closer to 200. Even Vicky Ostwal, the economical left-arm spinner, went for 5.16 per over as Rew preferred pulling off the back foot or going over midwicket. In fact, as England went past 180, it appeared like it was game on with India probably needing to chase a target in the range of 225-240.
But that's where it all went wrong again. Rew, on 95, pulled a harmless Ravi delivery to a fumbling-tumbling-juggling Tambe at deep midwicket while Thomas Aspinwall became Ravi's fourth scalp three balls later. From the other end, Bawa combined with Bana once more to secure his five-wicket haul, and England failed to bat 31 crucial deliveries, all out for 189 in 44.5 overs.
The consistent left-arm swing bowler Josh Boyden lifted England early in the chase when the in-form Angkrish Raghuvanshi was caught behind for a duck, but neither Boyden nor the other seamers could make further breakthroughs despite accumulating the dot balls. With Harnoor Singh and Rasheed happy to bide their time, it was a waiting game for England as they looked for the error. That finally came in the 18th over, with the score at 49 for 1, when Harnoor gloved a short ball from Aspinwall to the keeper.
That brought the captain Yash Dhull together with his vice-captain Rasheed. They had put together a double-century stand in the semi-final and looked to attack England's spinners. Rasheed used his wrists to flick off his pads and stood tall to crunch cuts or drives through the off side.
Rasheed moved to fifty in the 27th over, but fell moments after, caught on the leg side after a wild heave off Sales. The same bowler then removed Dhull for 17 to give England a tiny glimmer of hope as India lost their fourth wicket with the score on 97.
Sindhu and Bawa, though, counterattacked. Bawa hit two sixes and one four while Sindhu also went over cover or midwicket. Two catches inside the ring sent Bawa and Tambe packing before India could get over the line, but there were enough runs left for Sindhu to reach his half-century.
He got to fifty in 54 balls, after which Bana wasted no time to finish the contest. The first six went over deep square leg. The second one soared over long, and even before it landed, the camera panned towards the India players running in to celebrate.
Bawa was named Player of the Match in the final for his all-round performance. South Africa's Dewald Brevis collected the Player of the Tournament prize for his 506-run tournament. Dhull joined Mohammad Kaif, Virat Kohli, Unmukt Chand and Prithvi Shaw on the list of Indian captains to win the competition.
India
England
England U19 vs India U19
ICC Under-19 World Cup