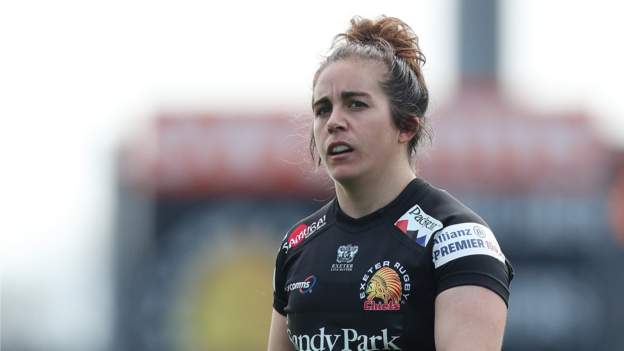 The Rugby Football Union says the next Premier 15s cycle will have a "focus" on the numbers of England-qualified players in the league.

Exeter are expected to field a squad of predominantly foreign internationals when they face Saracens in Friday's Premier 15s final at Sixways.

Sides must currently have an average of at least 16 England-qualified players in a matchday squad.

Clubs who fail to do so miss out on £7,500 in additional RFU funding.

The current Premier 15s cycle has one more season to run, and the RFU is still deciding on the criteria for clubs to be considered for inclusion from 2023-24.

The RFU said: "Like with all minimum operating standards and regulations these are reviewed on a season-by-season basis and are always under review and this [England-qualified players] will be a focus area ahead of the next cycle."

Given their relatively weaker domestic leagues, Welsh and Scottish internationals make up the majority of non-English Premier 15s players and the number of players from around the world has doubled since last season.

'Every club is made up of internationals' - Appleby

Exeter have built a highly successful squad in less than two years.

Head coach Susie Appleby used her contacts across the global game to entice some of the biggest names to the West Country, including United States captain Kate Zachary and Spain's Patricia Garcia.

"My directive from (Exeter chairman) Tony Rowe was to be competitive," explains Appleby.

"I did have numerous conversations with English contracted players, but no-one was willing to move.

"Yes, we have some overseas players, but Sarries have loads of England players, so what's the difference?

"They also have Welsh, we have Welsh, every top club in this league is made up of different international players."

'No reason to throw mud at Exeter' - Austerberry

Conversely Saracens, and the 2021 Premier 15s Champions Harlequins, have enjoyed a duopoly on some of the best England talent since the league's inception.

England are favourites to win October's World Cup and are top of the world rankings - success Saracens head coach Alex Austerberry attributes to the strength of the league.

"I don't think there is reason for me to throw mud at Exeter's programme, it's different to ours, fair credit to them.

"It's got them to a final and they are worthy of being in a final."

More in this category: « Quins miss out on play-offs after Lang's late penalty falls short South Africa v Wales: Sporting history awaits tourists in the 'Mother City' »
back to top