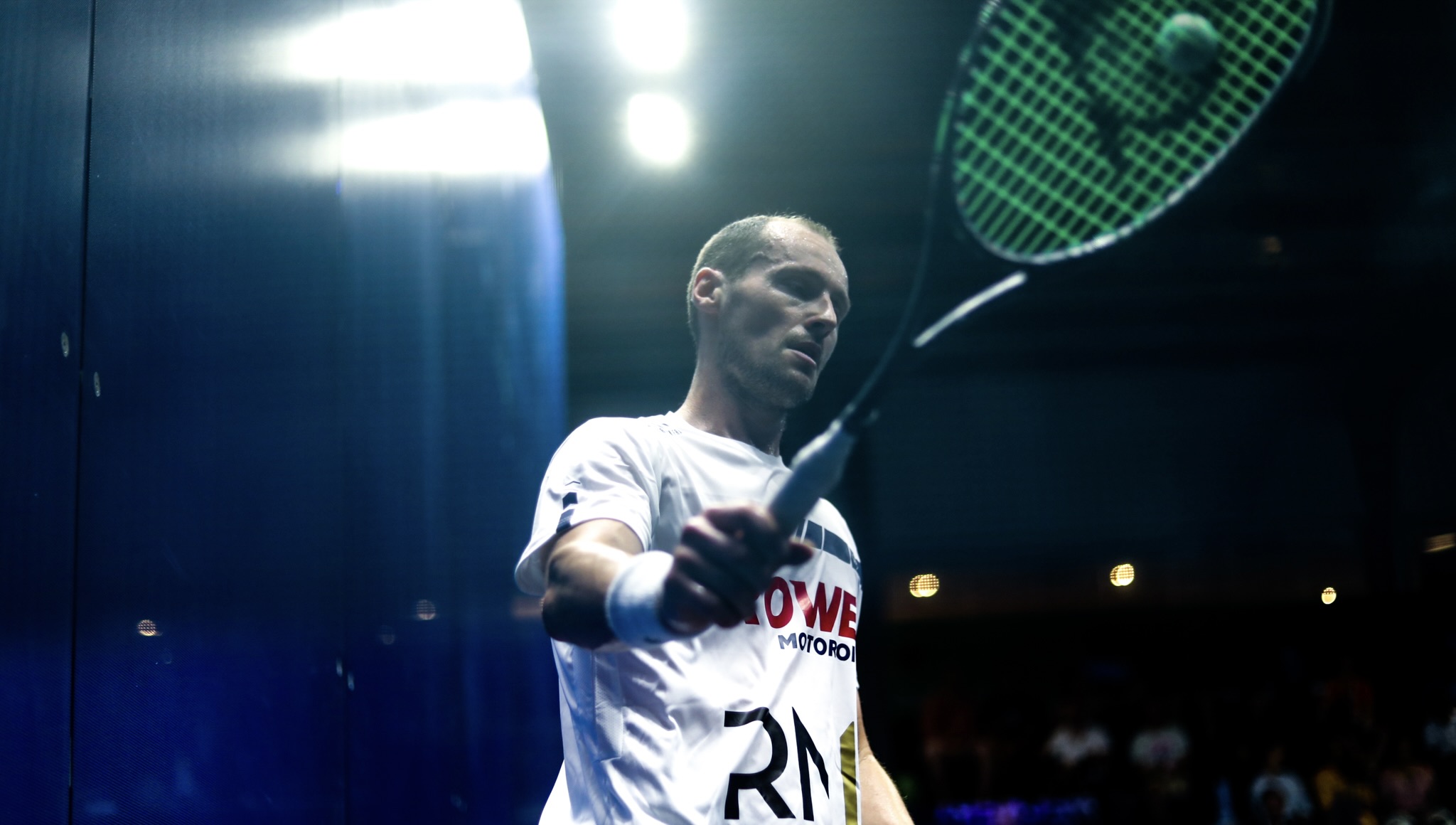 Gregory Gaultier is like an addict who simply can’t give up squash. Promising it will be his final farewell, Gaultier gave himself the wild card for his latest venture in Mauritius and promptly beat England’s George Parker in the first round.

The last time Parker was in a similar position he met Daryl Selby at Canary Wharf in the England captain’s farewell tournament.

On that occasion, Parker looked the ultimate professional as he got the job done in straight games.

However, half a world away the ‘French General’ made a victorious appearance at the RM Club in Grand Bay, Mauritius, to beat Parker in the first round of the Necker Mauritius Open, Presented by Beachcomber Resorts and Hotels.

The Frenchman, who last featured on Tour at the PSA World Championships in July 2021 and officially retired from the sport in October, made a triumphant return to the court, in what he insists will be a one-off appearance.

Gaultier, who has continued to train in Prague following his retirement, showed his class in the opening game, with some vintage shots that were a throwback to when the former World No.1 was at the peak of his powers. His courtcraft was enough to push himself into a two-game lead, after securing the second when the referee awarded a conduct stroke against Parker.

The Englishman fought back after that, though, and was able to use his superior fitness levels to start moving Gaultier around the court, with the 39-year-old tiring as the third game went on.

The 2015 world champion was able to regroup after losing the third, though, and a run of quick points in the latter part of the fourth helped him to victory, advancing to the second round of the PSA World Tour Gold level event, where he will now face World No.8 Mazen Hesham.

Gaultier told the crowd: “It’s a pleasure to be here, of course. I was planning my retirement here but we had to postpone the event during the last two years. We came here and had a good party and we came to the agreement with the team to have one more go so I’m happy to be back on court.

“I’ve been on the other side, coaching a lot recently, and sometimes you feel a little pinch and you want to be there but it’s time for something else.

Another former world No.1, England’s James Willstrop, had to fight back to defeat India’s Ramit Tandon in a pulsating contest to end the night’s play.

Willstrop missed the World Championships and the El Gouna tournaments in Egypt to appear in Outside The Box, a play about the history of squash, at the University of Birmingham.

Back on court, he forgot his lines early on in the match, losing the first game 11-5, but then stuck to the script to turn it round.

He showed his trademark accuracy and control to win the second game 11-4. Tandon then took big leads in both the third and fourth games, but Willstrop came back to win both, including taking a run of nine straight points in the third game to come from 7-2 down to win it 11-7.

The same pattern followed in the fourth game, with Willstrop also saving a game ball in the process, taking it 12-10 to win in four.

He now faces an intriguing second round battle with another former World No.1, his new English team-mate Mohamed ElShorbagy.

It promises to be a special occasion between two great showmen. Willstrop said: “You have to battle away. I didn’t feel too bad at times, but he’s very good in the middle areas and in the front of the court so you’re going to feel a bit uncomfortable again someone like him. He’s so prolific at the front so you’ve got to ride that phase.”

Asked about the venue, Willstrop added: “This court feels great. It’s a lovely, true court. It takes a shot in nicely even though it is warm. It’s taking the ball into the front, which is what we want.

“We don’t want to see the ball in the back all the time and that’s good. That’s why glass courts were made, as well as allowing more people to watch so it’s great.”

Torrie toppled in first round thriller

In the RMCLUB Women’s Open, Presented by Expression Networks, the opening match of the tournament sprang a surprise, as Singapore’s World No.123 Au Yeong Wai Yhann defeated England’s World No.95 Torrie Malik in a five-game battle.

The pair were meeting for the second time in less than a month, with the young Englishwoman having won 3-1 in the opening round of the NTA Squash Classic in Boston, USA, in May. She held the lead early in this contest, but some great squash from the Singaporean saw her take the second and third, the latter on a tie-break.

Malik fought back to win the fourth game comfortably, but Yhann recovered, bringing out some of her best squash in the final game, winning it 11-8 to advance to the second round of the Challenger 30 level competition, where she will now face the tournament’s No.7 seed, Marie Stephan from France.

There were wins for the English trio of Alicia Mead, Lucy Beecroft and Millie Tomlinson, the latter of which had to come from behind in her duel with Egypt’s Nour Ramy to win in four games. Beecroft will now take on French No.2 seed Melissa Alves, while Mead will advance to face top seed Tinne Gilis in the last 16.

Action will continue with second round matches today (Wednesday, June 8). Action from the Necker Mauritius Open will be shown live on SQUASHTV, with the RMCLUB Women’s Open being streamed live on the PSA Challenger Tour YouTube channel.