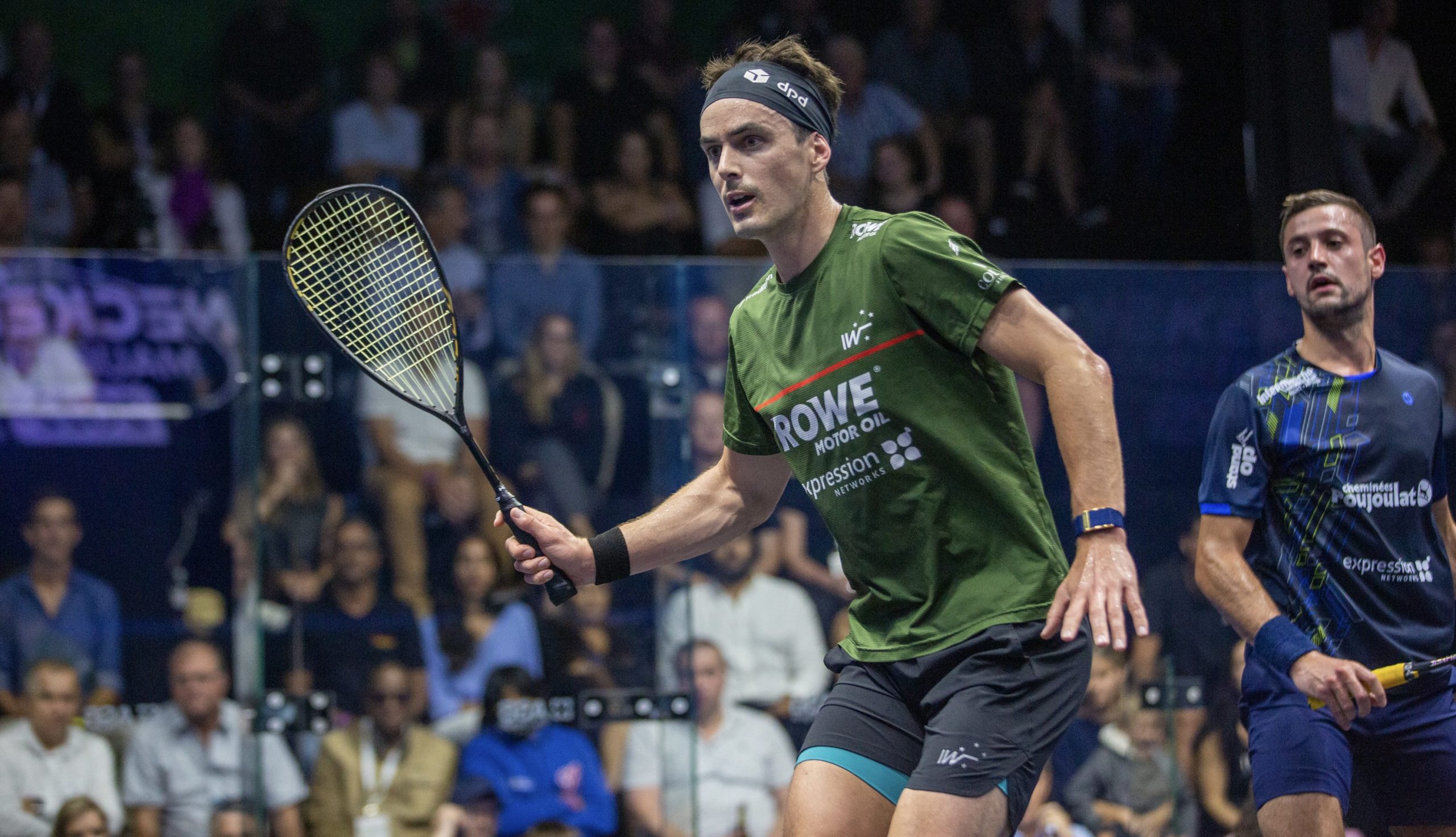 Top seed Coll, the World No.2 from New Zealand, came up against Frenchman Baptiste Masotti in the last eight at the RM Club in Grand Bay, Mauritius, in this PSA World Tour Gold level tournament. However, he had to fight to reach the last four.

Masotti’s aggressive style of play helped him to win the opening game, and he simply refused to lie down as Coll worked his way into the match.

Coll paid tribute to Masotti, saying: “He played really well, he can put the ball away but it’s just whether he can have his winner/error ratio in his favour.

World No.3 Mohamed ElShorbagy also booked his spot in the semi-finals after coming through against another Frenchman in four games.

Gregoire Marche won the second game 15-13 but suffered a nasty ankle sprain at 8-8 in the third. Marche bravely returned to the court to play on but his movement was restricted as ElShorbagy closed out a 3-1 win to set up a clash with Egypt’s Tarek Momen in the last four. Momen took out fellow Egyptian Omar Mosaad in four games.

ElShorbagy, playing in Mauritius under the English flag for the first time, revealed: “I thought the match was very high quality and played in the right spirit. I actually didn’t see when he fell but I heard the crowd then the replay came on, so it mustn’t have been good,”

“I have great respect for him for continuing. He didn’t need to do that, and I hope it is not too serious.

“Thanks to the crowd for coming and supporting us every day. You guys make it really special for us. It’s our first time here and on behalf of all the players, we’re absolutely loving our time here so thank you so much for supporting us all.”

In the RMCLUB Women’s Open, presented by Expression Networks, the top three seeds all made their way into the semi-finals after Scotland’s No.4 seed Lisa Aitken withdrew in the morning before her match against Enora Villard because of illness.

Coline Aumard’s career came to an end as she retired from the sport following defeat to her good friend Tinne Gilis, the top seed. Aumard and her husband Adam Auckland are now planning a new life in Mauritius.

The Belgian Gilis won in straight games, with the pair both showing emotion at the end of the match, hugging with tears in their eyes.

Gilis said: “I knew this was going to be her last tournament and it’s mixed feelings that I’m her last match on the PSA World Tour. I’m honoured in one way, but very sad on the other side, because I don’t want her to leave!

“Coline can be very proud of herself and what she’s achieved. I think a lot of people are very proud of you. You’ve been a big help for everyone and have always been very kind.

“I think, knowing that you’re going to live here in Mauritius, and everyone’s going to take such good care of you, the facilities here are amazing, you’ll be fine here with Adam. I’m very happy for you and I wish you all the best in the future.”

Aumard said: “Of course, it’s very hard to find words right now but I think you can see how happy I am to be here. I mean, it’s happy tears, you know?

“Something very nice is coming for me and Adam and I feel very proud of myself and very honoured to be on this court day to play my last match because it’s where I’m starting my new chapter. Sharing that with my new home is very special and thank you so much for being here watching me today.”

No.2 seed Melissa Alves had to fight from two games down to overcome the challenge of England’s Julianne Courtice. No.8 seed Courtice began strongly, dropping just seven points in the first two games, but Alves then took control. By the fifth game Courtice looked tired and lost it 11-1.