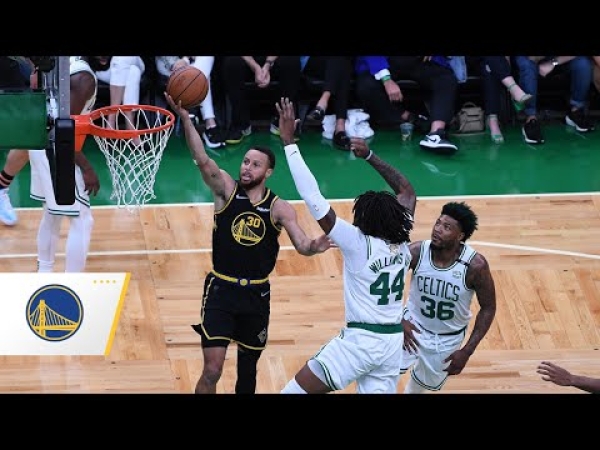 Verizon Game Rewind | Warriors Win Gritty Game 4 in Boston - June 10, 2022
It wasn’t officially a must-win game, but it was pretty darn close. And when push came to shove, the Warriors, led by a brilliant outing from Stephen Curry, tied the series at 2-2 with Friday’s 107-97 win in Boston. The Warriors trailed by four points with less than five minutes to go in the fourth quarter, but ended the game on a 17-3 run. Klay Thompson hit the 3-pointer to put the Dubs ahead for good and Curry scored 10 of his game-high 43 points during that run as the Warriors regained home court advantage in the series. The Warriors played from behind for the majority of the game, but unlike Game 3, the Dubs never let the game get away from them. They trailed by as many as seven points in the first quarter and Boston matched that advantage in the second and third periods, but the Warriors answered with yet another strong third quarter during which they outscored Boston 30-24. The Dubs had a shaky start to the final period with some turnovers, and Boston’s Marcus Smart knocked down what seemed to be a back-breaking 3-pointer as the shot clock expired to put the Celtics up four with a little over five minutes left in the game. But the Warriors didn’t fold. An Andrew Wiggins putback stopped the Celtics spurt, Thompson knocked down his fourth 3-pointer of the game to put the Dubs up for good, and a few minutes later Curry punctuated the 10-0 spurt by drilling a 27-foot 3-pointer from the right wing. That shot gave the Dubs a six-point lead, their largest advantage to that point of the game. Curry, one of three Dubs players with at least 10 rebounds, added to the run with some late free throws, scoring 24 of his 43 points in the second half. With the NBA Finals tied at 2-2, the series shifts back to San Francisco for Game 5. @Verizon || Game Rewind
Read 81 times
More in this category: « 'On the Ground:' UFC 275 Fight Week Vlog With Behind-The-Scenes in Singapore Full interview: Avs goaltender Darcy Kuemper wins the 2022 Stanley Cup »
back to top