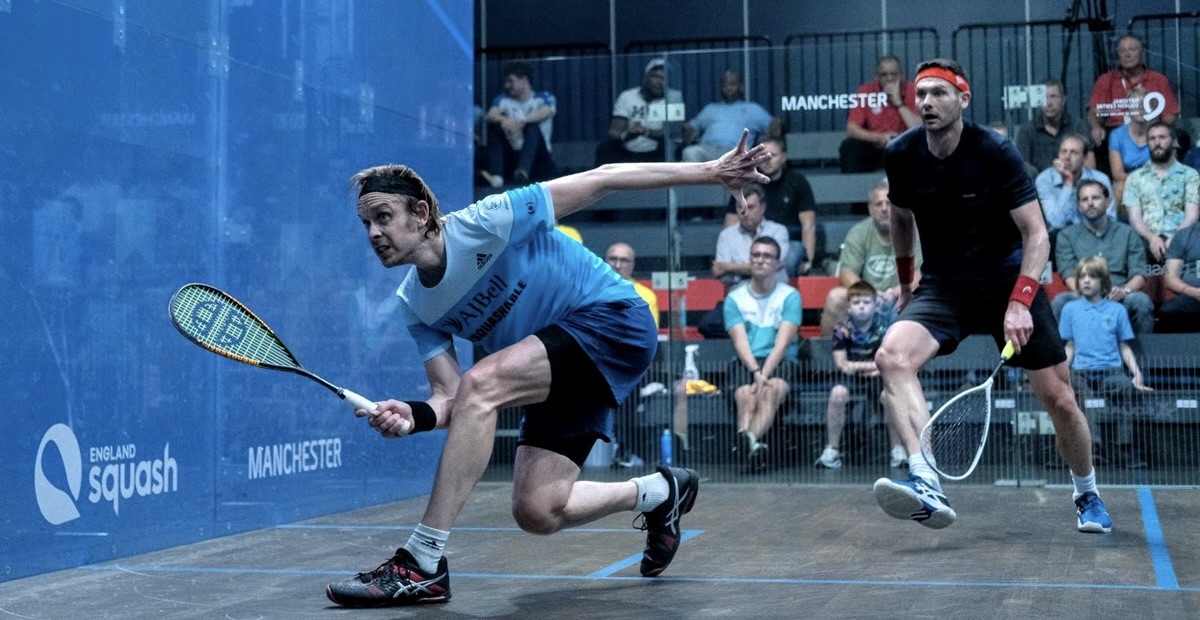 Four-time British National champion James Willstrop upset the seedings on quarter-finals night as he overcame No.4 seed and compatriot Adrian Waller in a 33-minute 3-0 victory to reach the 15th Nationals semi-final, where he will meet top seed Mohamed ElShorbagy in what promises to be a classic encounter.

There was very little to separate the two in the opening game, but Willstrop had that extra bit of control in the crucial stages to sneak a one-game lead.

The former World No.1 stamped his authority on the match in the second game as he swiftly doubled his advantage, defending well and attacking with style when the opportunity presented itself.

Waller threatened a comeback after some intelligent play in the third game saw him sit within a point of Willstrop at 10-9 down, but a critical error put paid to his chances as Willstrop booked his spot in the last four.

Willstrop said: “At 9-9 I was saying to myself that he is very good at figuring out these comebacks – he plays five-game matches and wins them.

“He was absolutely brilliant at the Euros, unbelievable performances. He’s played brilliantly in team events for us, at the World Teams in Washington in 2019, and he’s very unique. He’s buzzing around the ’T’ and wanting to take every volley he can, it’s such a good attack. I thought I played those good little areas at the end of the games pretty well.

“We have a lot of mutual respect and we just got on there and played squash. It’s weird that I’ve been on tour for 100 years and I’ve only played my compatriot four times, which is crazy really, but it was nice to play him tonight.”

Willstrop’s semi-final opponent will be No.1 seed ElShorbagy, who progressed after a stern test from 22-year-old Nick Wall. The Sheffield-based youngster took the first game against the World No.3 with intense and aggressive play.

After taking the first game, Wall began to struggle to keep up with the physicality of ‘The Beast’ and ElShorbagy noticed this and pounced. ElShorbagy’s length drastically improved and he started to move the ball into the front two corners more aggressively which spelled trouble for Wall.

Despite a spirited showing, ElShorbagy was able to close out the remaining games 11-6, 11-2, 11-8 to take his place in his first British Nationals semi-final but was complimentary of the attitude of Wall.

“I phoned my brother this morning to find out some things about Nick as I haven’t seen him play before and I looked on SQUASHTV at one of his matches. He came at me in the opening game and surprised me a little bit but that’s the kind of mentality you want to see and I loved it to be honest. He made me angry and it made me play better but that’s the way I was when I first came on the tour as well.

“I always go in with the mentality of trying to win each match as it comes. I will start to think about the World Tour Finals next week but there’s no reason that if I play well here that I can’t next week as well. As a top player, you need to play well every week so that’s what I’m going to try and do.”

The other men’s semi-final will be played out between the No.2 and No.3 seeds in the event, Joel Makin and Patrick Rooney. Makin came through in straight games against a tricky Curtis Malik, who made the most of his time on the Manchester glass court and troubled Makin in spells on his way to a 3-0 defeat.

World No.21 Rooney showcased his excellent ball control to beat Scotland No.1 Greg Lobban in a topsy-turvy four games. Rooney led 2-1 but trailed 9-2 in the fourth game and the match looked certain to move into a decider. The England No.3 had other ideas, however, and started to relax his arm and claw points back. Rooney claimed the game 12-10 to move into his first Nationals semi-final.

No.6 seed Lucy Beecroft scored a surprise win over No.4 seed Julianne Courtice to move into her maiden British Nationals semi-final. Beecroft, who is primarily based in the United States possesses great touch and control at the front of the court and utilised this in the opening two games to test the movement and fitness of Courtice.

After earning a 2-0 lead, some uncharacteristic errors crept into the game of the Northumbrian in the early stages of the third game. But Beecroft quickly recovered and set herself up with five match balls at 10-5. She only needed one attempt to secure a surprise place in the final four.

“It’s shocking what the effects of long Covid are and it showed with Jules and it’s a year on now. All that being said I knew she’d come out firing and can beat you in three so I wanted to get a good start and not let her get in front as I know how dangerous she is. She beat me twice last year and I feel like I’ve come a long way since then but she is still capable of getting great results so hats off to Jules.

“I love playing on the glass and I’m happy to be off in three. I haven’t been able to play many Nationals with being in the US and in college but it’s great to be back. I’m looking forward to playing Lucy, my fellow 305 Squash player. We had a good battle this time last year but I’m sure it’ll be a good match.”

All the top three seeds in the women’s event came through their respective matches in confident fashion all winning 3-0. No.1 seed Emily Whitlock defeated England’s Anna Kimberley to open the day’s play, Whitlock looked comfortable throughout the match and only needed 33 minutes to reach the semi-finals.

English duo Lucy Turmel and Jasmine Hutton were just as prolific as they defeated Alicia Mead and Grace Gear respectively to earn their places in the final four. The latter has reached the semi-finals of a British Nationals before but explained that time on the glass court is invaluable for progressing in the event.

“I thought she might have been a bit edgy, I don’t think she’s hit much on this court,” said Hutton. “To get a bye isn’t always easy, I remember when I reached the final, I had two byes and I hadn’t hit on the glass court and it was really hard so, credit to her for playing well in the last two games.

“I play on this court a lot, I’ve been coming here since I was about 14 years old for National squads and I’ve had some good wins on this court. I think I’m one of the few players who likes this court, it’s a lot hotter than usual but I’m just trying to adapt to it I guess.

“It’s so rare for me to play another lefty, I’ve got a lot stronger on my backhand so I’m happier on that side now and it’s good practice to defend on that side. I’m really looking forward to the semi-final, hopefully, will have the English crowd on my side and you never know what can happen on the day.”

More in this category: « - Copin’ in Copenhagen: Orla O’Doherty’s hilarious first column deals with meatballs, menopause and medals »
back to top