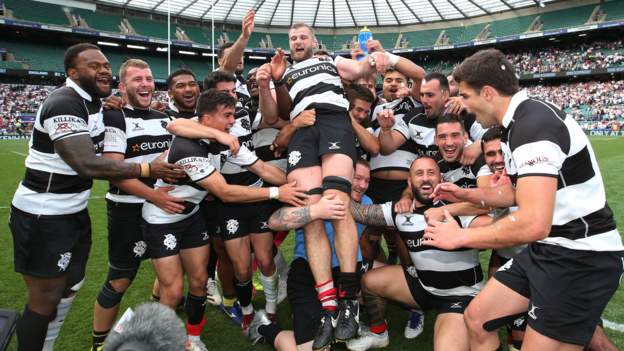 England were comfortably beaten by 14-man Barbarians in their final game before touring Australia this summer.

Marcus Smith's astute open-play kicking was a bright note for the hosts but the Baa-Baas controlled most of the game.

A penalty try was followed by a Charles Ollivon score and a gift for Damian Penaud before Will Skelton was sent off for the Barbarians before the break.

The invitational side were reduced to 14 men when Australia lock Skelton became the first Baa-Baas player to receive a red card following a high no-arms tackle on Patrick Schickerling.

Under-strength England handed three players a first start as they were without Leicester or Saracens players following Saturday's Premiership final and they had little answer to the scratch side's free-flowing rugby.

Smith struggled from the tee as he failed to convert any of England's three tries but his kicking from hand was precise and he had a hand in both of the home side's first two efforts before scoring the third himself.

The Twickenham faithful will not have enjoyed the result but they were treated to three conversions by former England lock George Kruis, including an audacious attempt with a backheel, in his final professional game before retirement.

England started brightly in their red kit as Smith got his hands on the ball early and tried to dictate the tempo of the game.

The Harlequins fly-half opened the scoring from one of his only two successful kicks from the tee but then it was all about the iconic black and white shirts.

Unlike previous Baa-Baas sides that contained players from over the world, this team had a very French feel, with many of the players from the Top 14 and two of the masterminds behind France's Grand Slam victory, Fabien Galthie and Shaun Edwards, at the helm.

As a result they were slick and well-drilled, making nine visits into the England 22 as they racked up more than 50 points.

A penalty try for Jonny May's deliberate knock-on was followed by a powerful surge over the line by Ollivon, before Mark Atkinson's first start for England took an unfortunate turn as he threw the ball straight to Penaud for an easy run-in with three red shirts poised to carry it forward.

Eddie Jones' side tried to get back into it, as veteran scrum half Danny Care came off the bench for his first international appearance since November 2018, but they look tired after an arduous season.

The Baa-Baas appeared fresher and better organised as they turned defence into attack on more than one occasion.

Their own replacement scrum-half Nolann le Garrec lofted a kick over the top of the scattered England defence for Carbonel to gather and score the pick of five second-half tries under the posts.

Jones will announce his touring party for Australia on Monday before his side face the Wallabies on three consecutive weekends from 2 July in Perth, Brisbane and Sydney.

'We weren't good enough' - what they said

England head coach Eddie Jones speaking to Amazon Prime: "Obviously we are disappointed with the result. In terms of preparation for the tour, we tried a few different things and we weren't good enough but there are a few guys who played their first senior game and a few guys that played their first game for a few years.

"There is a big gap between club level and international rugby and some of the guys experienced that today and they will be better for it."