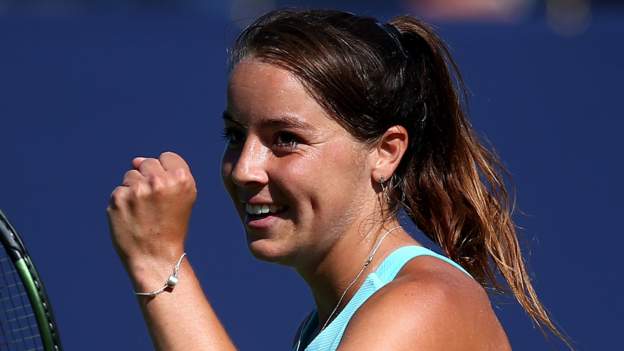 British wildcard Jodie Burrage came back to defeat Croatia's Petra Martic in her first-round match at Eastbourne, but Heather Watson is out.

Eastbourne is the final WTA event in the UK before Wimbledon begins on 27 June.

Nakashima will face British number one and top seed Cameron Norrie, who received a first-round bye.

Burrage, ranked 169th, trailed by a set and a break against Martic but rallied superbly from 5-3 down in the second set to seal victory.

The Briton won four successive games to level the match but lost the opening game when serving at the start of the crucial third set.

However, Burrage established a 4-1 lead with two breaks in quick succession, before serving out an impressive comeback victory.

After conceding the opening set by losing six successive tie-break points, Watson broke back to level at 3-3 in the second set but Marino saw out the match after converting her third break point in the following game.

Home players Harriet Dart and Katie Boulter will also compete in the women's draw - but British number one Emma Raducanu is not taking part as she aims to recover from a side injury before Wimbledon.

Jabeur hopes to learn from 'legend' Williams in doubles

American great and 23-time Grand Slam singles champion Serena Williams will make her return to the WTA Tour at Eastbourne after a year out when she partners Ons Jabeur in the women's doubles.

Tunisian world number three Jabeur, a 2021 Wimbledon quarter-finalist, will not contest the singles at Eastbourne, instead focusing on the doubles with Williams.

"Serena is Serena. She is a legend and always will be. The fact that she returned and I get to be part of her journey, it's really unbelievable.

"She did a lot for our sport and I really respect her, respect her story, respect everything she's been through."

Williams, 40, was announced as a Wimbledon wildcard last Tuesday despite not playing since she injured her leg last summer at SW19, where she is a seven-time winner.

"I hope I can learn even like two per cent from it," said Jabeur. "I hope it's not going to make me too nervous, standing next to her."