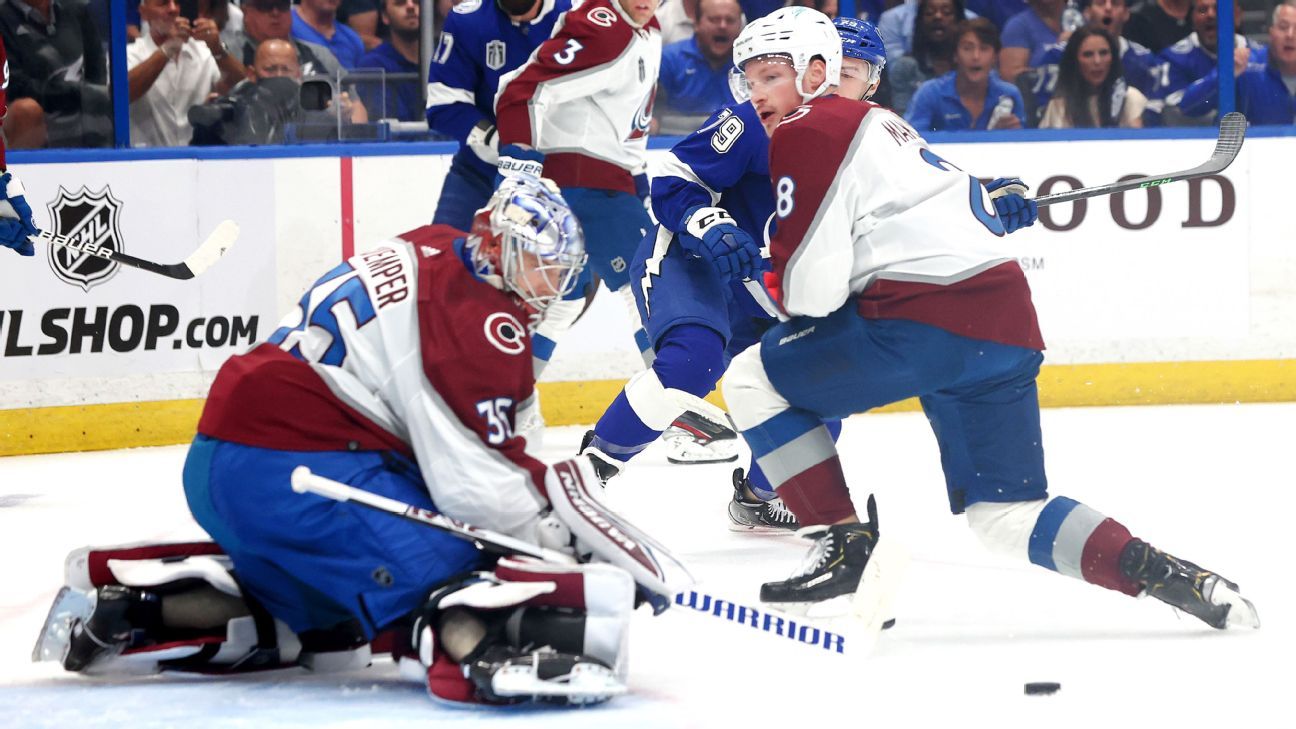 The reigning Stanley Cup champions might be on the ropes. The Tampa Bay Lightning, winners of consecutive titles, return home, down 2-0 to the Colorado Avalanche.

It's not just the two-game deficit in the Stanley Cup Final, it's how the Avalanche have won. Colorado jumped out to early leads in both games and, in Game 2, absolutely dominated Tampa. Goaltender Andrei Vasilevskiy, one of the best postseason goalies in NHL history, was blitzed for seven goals on Saturday.

The seven-goal margin in Game 2 is the largest shutout in a Cup Final game in the last 30 seasons, according to ESPN Stats and Information. It was the third time in this postseason that Tampa had allowed four or more goals after not doing so in either of the previous two postseasons.

"Does it suck losing a game like that? For sure," Tampa coach Jon Cooper said. "We're not used to it. It doesn't really happen to us."

Vasilevskiy allowed nine goals in the first two games of the Eastern Conference Finals against the New York Rangers and the Lightning still managed to win that series. So there's still hope.

Will the home ice make a difference or will the Colorado scoring barrage continue? We'll find out in Game 3.

Lightning in the lead

For much of it, the Lightning's first period very much felt like survival rather than an assertive response to the Avalanche's 2-0 series lead. They needed Andrei Vasilevskiy's toe save on J.T. Compher around four minutes into the game. They needed the NHL Situation Room to take Valeri Nichushkin's floater goal off the board thanks to an offside. They needed a funky "no shot" goal by Anthony Cirelli to slide past Darcy Kuemper into the net for the first goal since the second period of Game 1.

But then, in a flash, they looked like the Lightning again. Ondrej Palat stealing the puck from a Devon Toews pass. Nikita Kucherov drawing defenders to him in the offensive zone. Steven Stamkos setting up Palat for a goal to make it 2-1, as the unsung winger notched a point in his ninth straight playoff home game. And Vasilevskiy maintaining the lead against more Colorado pressure, as the Avs had 14 shots on goal in the period.

The Lightning are 6-1 when they lead after one period. More importantly, they didn't trail by multiple goals after the first 10 minutes of a game in this series. Small victories. -- Greg Wyshynski

Valeri Nichushkin thought he scored the game's first goal on a change-up shot that beat Andrei Vasilevskiy early in the first period.

It was Tampa Bay who'd be getting the change.

The Lightning successfully challenged the play as offside, taking the wind out of Colorado's sails in what had been a frame mostly steered by Tampa Bay.

It didn't last long, though. Colorado is as resilient a team as you'll find and showed it again in weathering both Tampa Bay's initial push and their early power play chance. Not only did the Avalanche hold the Lightning off, they also drew a penalty. Gabriel Landeskog scored on the ensuing man advantage to turn the tides on Tampa Bay.

That was the ninth-straight unanswered goal scored by Colorado in this series.

It was a nine-minute stretch that showed the best of Colorado: Depth, fortitude, talent, identity.

The Avalanche will need more of those segments as the night unfolds. They got sloppy as the period wore on. And it was the Lightning who took advantage with a pair of goals. Colorado hasn't had to face much adversity of late. Between the overturned goal and trailing this Cup Final for the first time, how will they manage a true challenge now? -- Kristen Shilton

Colorado Rockies pitcher and Denver native Kyle Freeland stood out in the crowd as he cheered on his hometown squad.

Did somebody say 'chicken parm'?

Peanut butter and jelly. Batman and Robin. John Buccigross and chicken parm. The tradition of teams presenting Buccigross with the meal continued ahead of Game 3. The Lightning even got their mascot, ThunderBug involved.

With a side of fur just for @Buccigross ? https://t.co/MMpSvWf4Gr pic.twitter.com/BPqyhMr9nA

In case you needed a better look, our Greg Wyshynski has you covered.

ESPN Behind The Scenes: Preparing the chicken parm for ⁦@Buccigross⁩ on THE POINT, filmed in Super Sauce Vision! pic.twitter.com/zr4uiiFYme

Tampa Bay is down but not out

Is the situation ideal? Nope. Is the series over? Far from it. Will this Lightning hype video have Tampa Bay fans ready to run through a wall before puck drop? Probably.