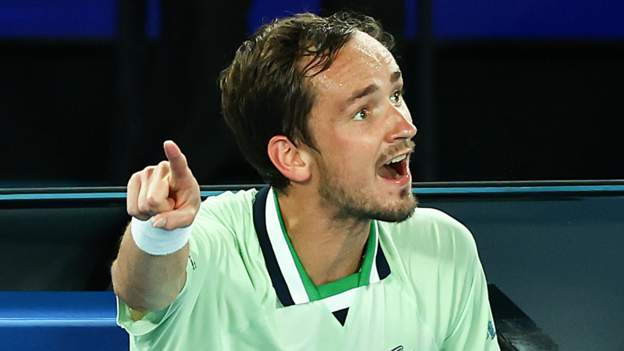 Off-court coaching will be trialled at the US Open and other men's tennis events in the second half of this season, the ATP has announced.

The governing body of men's professional tennis said coaching will be permitted from designated seats at Tour events, starting from 11 July.

The trial will continue until the season-ending ATP Finals in November.

It will then be evaluated "to assess potential inclusion in subsequent seasons," the ATP said.

The women's WTA Tour already has an off-court coaching trial in place.

Coaching during matches has been controversial in the past, with some players accused of illegally receiving advice - including an outburst from Daniil Medvedev in his match against Stefanos Tsitsipas at this year's Australian Open.

Off-court coaching will only be permitted from designated coach seats, and is only allowed if it does not interrupt play - or an opponent.

A player must also be at the same end of the court to receive verbal coaching - which must be restricted to a few words - but non-verbal coaching is permitted at any time.

Penalties and fines will still apply for abuse of the updated coaching rules.

The ATP said the trial "aims to create additional points of intrigue and insight to enhance the fan experience".