'Quite the unique individual': What Pat Maroon brings to the Lightning on and off the ice 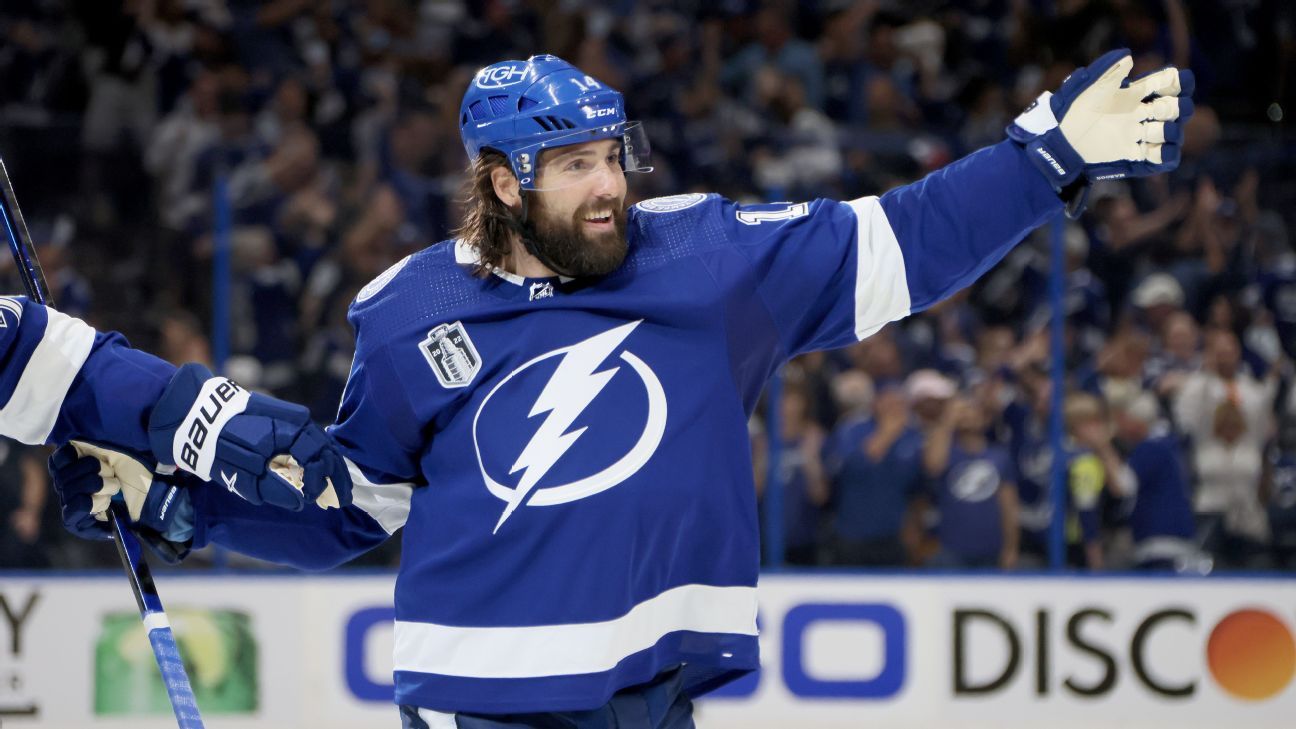 In Game 3 of the Stanley Cup Final, the Tampa Bay Lightning winger passed the puck to teammate Nikita Kucherov. His job was to go straight to the Colorado Avalanche net and get behind their defense. Once he did, he shouted "yeah, yeah!" to Kucherov, who hit him with a pass that Maroon roofed for the Lightning's fifth goal of their 6-2 rout.

A few days earlier, Maroon had a different job. It wasn't lighting up the scoreboard. It was lightening the mood.

It was the day before Game 2 of the Stanley Cup Final. The Lightning were stretching on the ice in Denver, down 1-0 in their series against the Avalanche. It was Kucherov's birthday, and Maroon, the team's bruising but jocular veteran winger, attempted to get a chorus of "Happy Birthday To You" going for his star teammate.

The song fizzled, so Maroon moved to his next tension breaker: Playfully slashing teammates during their morning skate.

"Obviously coming off the loss, it's important to turn the page. I think that's what made us successful in the past is to put stuff behind us," defenseman Victor Hedman said. "Pat is very good in these situations. He has been throughout the season and all the years he's been here."

"I'm very lucky and very fortunate to be a part of this. I take this game very seriously," Maroon, 34, said. "It never gets old for me. You love the sacrifice. You love the happiness in the room after a big win."

If there's happiness in the room, Maroon is frequently the source for it.

"He brings a lot of personality," coach Jon Cooper said. "He's in a room where there's not very much noise, he's creating an atmosphere in that room. Which was much needed in our group. We've got a lot of character in our room, but not a ton of characters. And he's a character."

From his attention-grabbing gameday suits to his wickedly funny on-ice insults -- he once mocked Josh Anderson of the Montreal Canadiens for having the same number of points as Maroon, "which is embarrassing" -- Maroon is "one of a kind," according to defenseman Ryan McDonagh.

"He's quite the unique individual," McDonagh said. "We had played him. Heard a lot about his character and what kind of locker room guy he was. But I thought he was kind of an odd guy."

McDonagh and Maroon share an agent. When Maroon was a free agent and looking for a team with which to sign, he and McDonagh played a couple of rounds of golf together in Minnesota.

"He just likes to have a lot of fun out there," said McDonagh with a laugh. "Sometimes it's not about the shot he hits. It's about all the other activities."

Whether it was the golf game or not, Maroon signed with the Lightning in Aug. 2019. It was his fifth NHL stop. He started his career with the Anaheim Ducks for five seasons, then was with the Edmonton Oilers for parts of three before going to the New Jersey Devils at the 2018 trade deadline. His only season with the Blues resulted in his first Stanley Cup championship -- a memorable ride for the St. Louis native.

He joined the Lightning at one of their lowest points during Cooper's time with the team -- following their first-round sweep loss to the Columbus Blue Jackets that sullied one of the best regular seasons in NHL history. The anxiety on the team was wrenching. The pressure of unfulfilled expectations was crushing.

"When he came in, the big thing for us was that he brought some life to the room but also a pedigree of winning and what it takes to win. [Kevin] Shattenkirk was very much in the same mold -- guys that brought a different perspective, some life, but also got to see how we played and things we could do to push us over the top," Cooper said. "That's what Patty brought. He's quite a character, that kid."

McDonagh said he could feel the difference the minute Tampa Bay signed Maroon. "It's his ability to keep the room loose at times or be serious and get the focus back. It's a unique trait. Not a lot of guys can do it and seem natural," McDonagh said.

This is the secret to Pat Maroon's success, and his status as one of the vital pieces to the Lightning's championship puzzle. One minute, he's cutting up the locker room with a bellowing joke. The next, he's saying something they're taking to heart at a critical moment.

"It seems like he was something we needed on the ice and also off the ice. He's a leader. A guy that's been around for a while. An effective player, not only in his role but helping other players," winger Alex Killorn said. "Throughout the season, there are times when you have to take a breath and relax, enjoy yourself, just so you don't burn out. And then there are times when something needs to be said and things have to tighten up. The older guys, especially Pat, understand that dichotomy."

Forward Pierre-Edouard Bellemare knew Maroon as an opponent before he arrived in Tampa last summer. He heard his chirps on the ice. He wasn't aware of his words in the locker room.

"When I got here, I realized it's weird. With all of his chirping and everything you would think the guy is kind of a clown. But at the end of the day, when it comes to hockey, he's more often than not just right on. When he talks in the locker room, he has a great understanding of what needs to be said and what the guys need to hear. I think it's one of his biggest values that people don't know about," Bellemare said.

Bellemare had played with "pump-up" players before. Those guys that bring the energy or the humor.

"This is not that kind of hype. It's more about saying the right thing at the right time to make sure the group doesn't fall in bad habits. Or adding to a terrific momentum. That's something that he doesn't get recognized enough for," he said of Maroon. "You don't go and win three [in a row] just because you're on really good teams. You have to add something to them."

What Maroon hopes he's added to the Lightning is the kind of veteran presence he valued as a young player himself. One that's jovial, motivating and, perhaps more than anything, welcoming.

Nick Paul is 27. He spent seven seasons with the Ottawa Senators before being traded to the Lightning at the deadline. He had never stepped into another NHL locker room. He said Maroon immediately made the transition a smoother one.

"He's awesome. Especially off the ice. He was one of the first guys to invite me out for dinner, helped me feel welcome," Paul said. "He's a leader in the room. When things need to be said, he's never shy about stepping up and saying hard things. Or saying funny things. He's a big voice in the room."

Paul is a charismatic player himself. "I wouldn't say silly, but I'm definitely a guy that keeps it light," he said.

To that end, Paul is already treating Maroon like a role model on what to say and when to say it. "Being able to turn the switch when you need to. When the game starts, the jokes are over. It's serious. It's everything we can do to win," Paul said.

On the ice, Maroon does all he can to help the Lightning, including acting as their de facto enforcer when necessary. That only adds to his authenticity within the locker room.

"The biggest key for him is that he cares about his teammates and he's willing to do anything to help them. It helps. Especially when he has to be stern," McDonagh said. "In the back of our minds, we know he loves everyone in that locker room so much."

Pat Maroon can be the class clown. He can be the motivational speaker. Ask Maroon, and you'll find out he can be like Dominic Toretto from "The Fast and the Furious" too: It's all about family.

"It's about building that family vibe. To know that if you text a guy they'll be at your house in two minutes," Maroon said.

It's something he learned from his days in Anaheim.

"I'm a firm believer in building that chemistry away from the rink. When you come to the rink, you'll feel so much better. Especially when you're a young guy," he said. "I remember coming to the rink in Anaheim and how much it meant to me to get a 'good morning' from Ryan Getzlaf or Corey Perry or Teemu Selanne, guys that you look up to. If they say good morning to you, your day is so much better."

Maroon's arrival in Tampa led to better days for the Lightning. He continues to add his unique gifts to this drive for a three-peat, including a goal in Game 3 of the Stanley Cup Final against Colorado -- a game that gave the Lightning new life in the series.

"I think it's how mentally strong our group is. Not giving up. We could have folded in Game 6 against Toronto and said 'what a great run it was.' Instead, we got that old swagger back," he said.

"There's a window that's going to be closing soon. Let's go out there and make history."