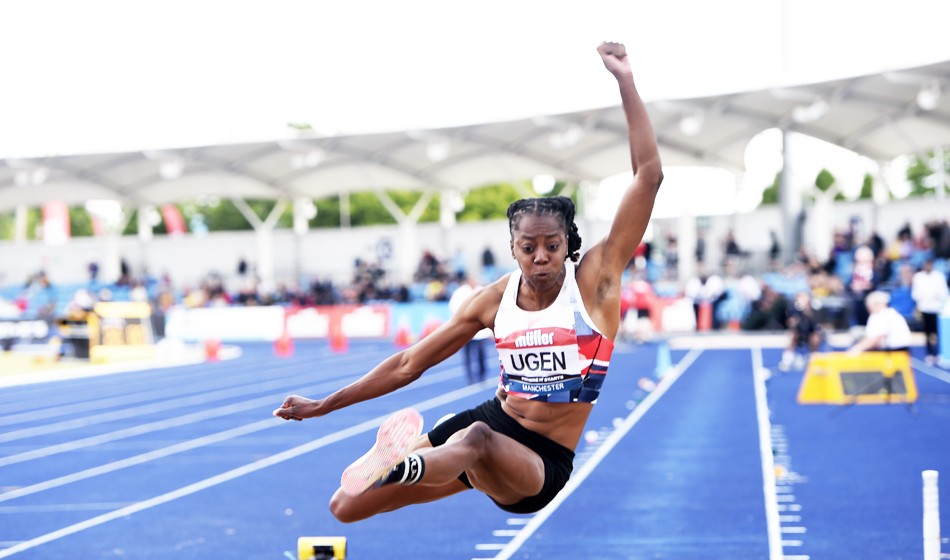 The women’s field events on day two of the UK Athletics Championships saw a number of athletes add to already substantial collections of British titles.

Lorraine Ugen has already tasted global competition this year, winning World Indoor long jump bronze in Belgrade, and she made sure of being a contender outdoors this summer by winning the national prize for a fifth time in Manchester.

Ugen, who also contested the 100m opening heats and semi-finals this weekend, now fully expects to be in medal contention come Oregon. Solid, if not spectacular, will do her just fine for now.

“It was good to get a good series of valid jumps in today which bodes well for the rest of the season,” said. “I usually build up to my best jumps.

“I will be going there [to Oregon] to get on that podium.”

Jade Lally is no stranger to victory when it comes to the national championships, either, and she captured her eighth British women’s discus title, breaking the stadium record on the way, thanks to her final throw of 61.42m in difficult, windy conditions.

Kirsty Law’s second-round 55.18m gave her the 11th British Championships medal of her career in second place, with Amy Holder third with a best of 54.54m.

“I’m over the moon throwing over 61m,” said Lally. “I did not think I would be throwing that this week. I had picked up a cold this week, but I eventually picked up the motions and I was hoping for a competitive throw and I got that.”

The local favourite secured he win with an opening round effort of 14.17m to finish clear of Sineade Gutzmore’s season’s best of 13.36m and Lily Hulland’s 12.84m.

The first senior British champion of the weekend to be crowned was Bekah Walton, who successfully defended her javelin title thanks to her third-round throw of 51.87m. Liverpool Harriers’ Emily Dibble took silver with 51.54m, while bronze went to Birchfield’s Emma Hamplett (49.02m).