Max Burgin lives up to rich promise in Manchester 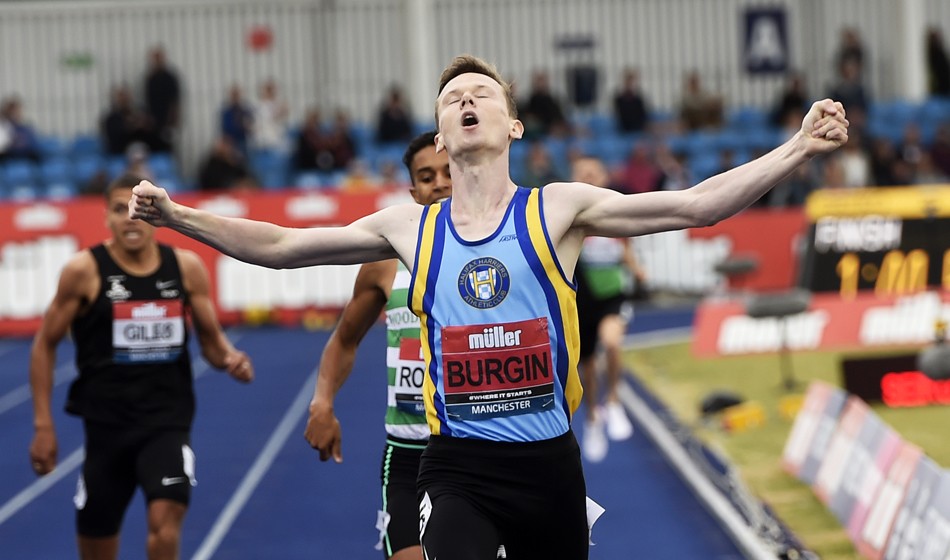 Max Burgin arrived at the UK Athletics Championships with trademark front-running tactics that earned him a 1:43.52 world-leading mark earlier this month. The question is, would he use the same strategy on Sunday at a Sportcity arena plagued by strong swirling winds?

“The wind threw into doubt whether front running was the best idea,” he admitted. “But I stuck with the plan. I thought I could handle the wind – and it paid off.”

It certainly did. The Halifax Harrier, who turned 20 last month, scorched through the first 400m in 50.6 with only Dan Rowden and defending champion Elliot Giles for company. Digging into the teeth of the wind in the back straight, he was still pursued closely by Rowden and Giles with 200m to go but began to draw away from them entering the home straight.

Crossing the line with his arms spread victoriously in 1:44.54, Burgin destroyed perhaps the strongest line-up of the 2022 championships. Rowden held on to finish second with 1:45.58 as Kyle Langford, who had stayed off the pace slightly on the first lap, finished strongly for third in 1:46.34 with Ben Pattison also closing quickly in fourth in 1:46.75 as Giles wound up fifth.

“It’s my plan A and it’s not failed me yet,” said the winner on ‘catch-me-if-you-can’ tactics that led to the quickest time at these championships for 32 years. “But there will come a time where I will have to experiment and try other styles of racing.

“I always aim to run as fast as possible and step off the track knowing I’ve done everything that I can.”

He certainly did. So much so that he was sick after his race. “I knew that was coming. That’s just me after every race. I put so much into it as I’m that much of a hole afterwards,” the Leeds history student explained.

A teenage prodigy, Burgin’s body has often betrayed him in recent seasons due to injury with hamstring and groin issues. But he has worked hard on strength and conditioning in the gym and this summer he has made it into late June injury-free and goes into the World Championships in Eugene as the fastest man in the world in 2022.

Can he win a medal there? “It’s certainly something I want to aim at but I have no idea how I’ll handle a three-round championship until I actually try to do it,” he said. “I’ll go in with high hopes and high ambitions and see where it takes me.”

The men’s 5000m was a different kind of race altogether as another Yorkshireman, Marc Scott, once again confirmed his status as Britain’s top male distance runner by blasting away from his rivals in the final 200m to seal selection for Eugene. In windy conditions his winning time was ‘only’ 13:42.82 but it involved a last 200m of 26.2 as he eased down to celebrate as he crossed the line.

The tactical nature of the race – along with the wind – ensured Dave Bedford’s remarkable championship record of 13:17.2 from 1972 survives another year. Scott was quick to pay credit, saying: “It’s very impressive and all credit goes to him. He was a great athlete. Maybe in the next couple of years we can have a go at it.”

James West and Jack Rowe finished second and third as Andy Butchart and Patrick Dever were fourth and fifth.

Marc Scott’s flying visit to England is a profitable one as he secures his World Champs qualification in the 5000m with an emphatic UK Champs win. pic.twitter.com/5qkrfJbImI

Nethaneel Mitchell-Blake proved one of the most popular winners of the weekend when he stormed to a championship record of 20.05 in the 200m. It was a rare moment when the wind dropped as well as he was aided by a legal tailwind of 2.0m/sec. “Thank the heavens for that!” he smiled.

The 28-year-old was fourth in the world 200m final in London in 2017 but lost his form during an injury-hit period throughout the pandemic, not to mention a relay medal when he anchored Britain to 4x100m silver in Tokyo but saw his squad disqualified due to CJ Ujah’s subsequent doping violation.

In November he moved back to London after nine years spent in the United States and he is now coached by Ryan Freckleton. He feels it is a turning point in his career and after beating Joe Ferguson (20.23 PB) and Jeriel Quando (20.40 PB) in Manchester he feels he has an ideal springboard to make an impact in Eugene next month.

“I have got my title back which is incredible and to book my seat on the plane to Eugene I cannot complain,” said Mitchell-Blake, who will be joined in the British team, which is announced on Tuesday, by runner-up Ferguson.

“I have been in a great place mentally. I feel like I have a second wind within this sport now, I’m feeling great at the right time especially with Worlds on the horizon.”

Tom Bosworth was an emphatic winner of the 5000m race walk as he whizzed to a 19:51.21 clocking. “It was like February out there,” he said, referring to the Mancunian weather, “but I will always support these champs as long as I am competing so delighted to come away with my eighth outdoor title.”

He added: “I am on a slow rebuild after a disrupted winter. There is a lot more quality in race walking in this country than were here so it is a shame I was out against myself again today.

“Despite injury and Covid I am now feeling the best I have and am getting back to form at the right time. I am definitely heading in the right direction and am hoping I may get an invite to Worlds but I also have Commonwealths and I have the standard for Europeans.”