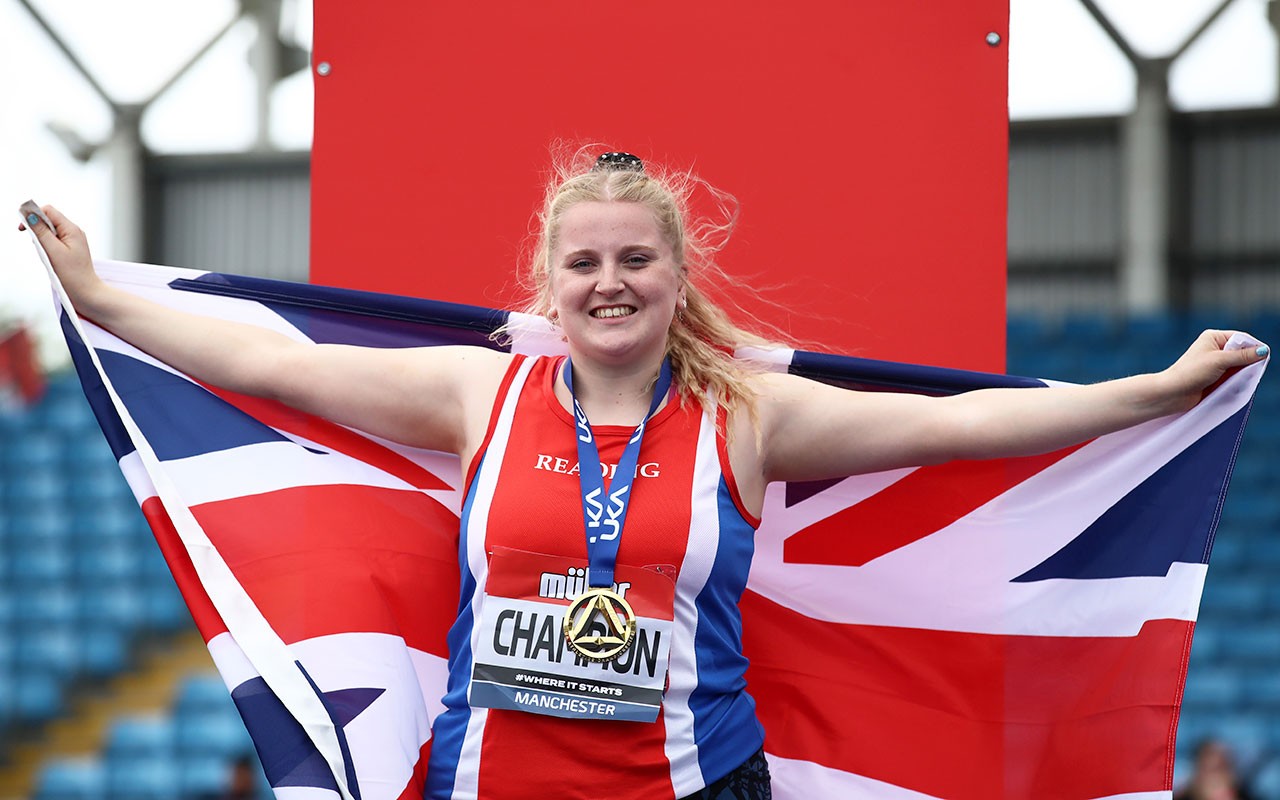 Final-round throw of 70.59m seals gold for 20-year-old while Holly Bradshaw prepares for Oregon with a tenth pole vault title

Charlotte Payne produced the highlight of the women’s field events on the third and final day of the Müller UK Athletics Championships, winning the hammer competition with her final throw as she reached 70.59m to not only break the stadium record but move to third on the UK all-time lists.

The 20-year-old, who is profoundly deaf, had to battle with the elements in more ways than one, with the strong winds creating feedback in her hearing aids which affected her balance, but her decision to “go for it” paid off.

Payne had been assured of gold before that closing throw, with her fifth-round 67.63m putting her in control and silver medallist Jessica Mayho finishing with 65.73m, while Katie Head taking bronze with a best of 65.58m. However, breaking the 70m barrier for the first time clearly meant a lot to the Reading athlete.

“It’s the best feeling ever,” grinned Payne, who had led the competition throughout despite fouls in rounds three and four. “I came into today in the best shape possible but the fact that I managed to pull out 70m with conditions like that is an amazing feeling.”

The Commonwealth Games had been Payne’s major target this year but she narrowly missed out on selection, with Anna Purchase (who has a best of 70.63m) the sole hammer thrower to be picked for Team England.

“I think if I’d thrown what I did today then I may have had a chance, but I was so close,” she said. “The standard of women’s hammer throwing in the UK this year has been crazy.”

Holly Bradshaw admitted her World Championships preparation has been far from ideal so far, but still she came away with a tenth British pole vault title.

The Olympic bronze medallist, who broke the British record with 4.90m at these championships a year ago, has been hampered by Achilles problems and illness but secured gold on countback from Molly Caudery with a best of 4.50m in the challenging conditions. Jade Ive took bronze with 4.30m.

The victor insists she can be a contender on the global stage again this summer. “It always feels great to be British champion again, which is something I never take for granted,” said Bradshaw. “It was good to have a battle with Molly. I jumped off a shorter approach today because right now I need to build confidence and because of the strong wind, which was such a challenge.  I have not had the best preparation to the summer coming on the back of illness but it is gradually getting there.  I am quietly optimistic for Eugene.”

A PB throw of 17.59m in the fourth round overhauled the opening effort of 17.49m from defending champion Sophie McKinna, who is working on a remodelled technique but made sure of her spot for the World Championships with second place. Bronze went to Divine Oladipo with 17.20m, with Amelia Strickler only able to finish fourth with 17.05m.

“This has been such a long time coming for me, I have worked so hard for this over the years,” said Nicoll, a silver medallist at the Bobsleigh World Cup earlier this year. “I have never taken gold at a British Senior Championships, so this moment here marks the start of my senior career. I couldn’t be happier and it means I’m in such a great position going into the Commonwealth Games [with Wales].

In the high jump competition, there were moments when the wind – and not just the competitors – dislodged the bar in Manchester. Yet Morgan Lake stuck to her task to win her seventh consecutive British title, on countback from Emily Borthwick, with a clearance of 1.85m. Kate Anson won bronze with 1.79m.

Lake, who admitted to being less than pleased with her competition, will now focus her efforts on the Commonwealth Games. She said: “Hopefully I can change a few things around and be competitive in that competition. The bulk of the hard work is done in terms of training, now it is all about refining the jump and making sure I’m consistent across all my jumps.”