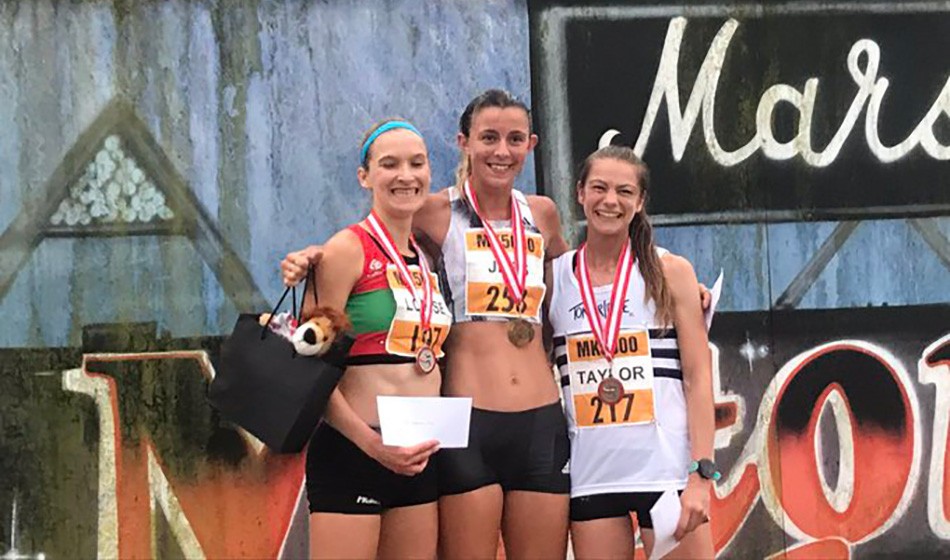 Jessica Judd and Ben Bradley won the elite races at the MK5000 PB Special at Milton Keynes to claim the English titles.

In good conditions of light rain and relatively cool weather after the midweek heatwave with not too much wind, athletes lived up to the PB title of the event with 11 of the 12 race winners setting PBs.

The one exception was Judd but she was probably the most impressive winner of the night.

Jennifer Walsh set a 15:30 pace but the other runners ignored it and she ran the first five laps alone as the pack ran at 15:50 pace.

The pace continued through 3km in 9:30 but the fourth kilometre slowed as they went through in 12:48.

Louise Small made the first move and took Judd away but the World University Games champion took off on the penultimate lap and covering the last kilometre in 2:49, she won in 15:37.38.

Bradley won the men’s title but for most of the race he was well off the pace.

James West was the pacemaker and he led through 3km in 8:12 and only Jack Gray was able to go with the 13:40 pace. After West dropped out at two miles, Gray began to slow and his nearest pursuers Mohamed Mohamed and 10,000m champion Adam Hickey gradually closed.

In an exciting finish Ben Bradley wins English title in PB 13:56 from Mohamed Mohamed with John Sanderson putting a dive in for third after Jack Gray had led most of the race @mk5000pbspecial pic.twitter.com/0BVsNaxCLk

However, it was Aldershot’s Bradley who came from well back in the chasing pack who proved the strongest in the final kilometre and on the last lap and he won in a PB 13:57.33 for the race victory of his life, though he was treading water in the finishing straight, having kicked from some way back.

Mohamed of Hillingdon rallied strongly to take the England silver in 13:57.84 with John Sanderson throwing himself across the line to take bronze in a PB 13:58.73, three hundredths of a second ahead of Hickey. Gray finished sixth.

Ahead of her, Caroline Hoyte was eight seconds outside the British W45 record with 17:09.08.

Overall the event was a huge success with multiple PBs, enthusiastic crowds lining the track and the beer and food stalls doing a roaring trade – so much so that lager and some of the food stalls ran out well before the championship races that climaxed the meeting.

Elsewhere, there was further 5000m track action taking place at Nottingham’s Harvey Hadden Stadium and there the winners of the 5000m Track Challenge elite races were Mohamud Aadan in 13:56.37 and Naomi Taschimowitz in 16:06.06.

Results from the final 4 races of the day. Full list of results are now available at https://t.co/SLAJvZEisN …. with 71% of runners setting a new PERSONAL BEST! pic.twitter.com/KrdyWaCu69