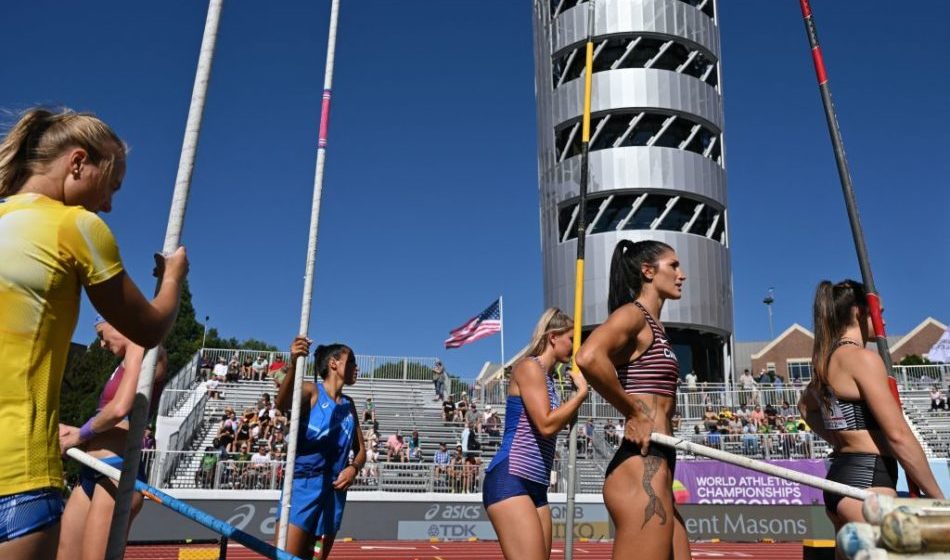 Holly Bradshaw’s World Championships campaign ended in heartbreak when she injured herself landing awkwardly after her pole snapped during a warm-up attempt in Eugene on Friday (July 15).

The Olympic bronze medallist from Britain was taking her final jump of her warm-up for the qualifying round when the pole broke mid-attempt and she landed in the box.

“It’s a bit of a blur to me but I was rotating and landed high on the back of my neck on the pit, and then slid down and I’ve done a bit of a number on my back,” she said.

“Initially I had mad pain through my wrist from the vibrations of it. There’s something going on with my glute and hamstring.”

She added: “I was absolutely gutted, I was heartbroken, I was crying in the box, sobbing. It was a massive, massive shock.

“I’ve felt really good for the three weeks coming into this. It’s been a rocky season and a lot of things haven’t gone my way but the last three weeks have been great. I thought I could have done 4.50-4.60m today clean in qualification and then challenge for medals in the final.”

She pulled out of the competition as a precaution but said: “I think I could have vaulted if it hadn’t been for my glute and hamstring. I was striding okay at 70% but any time I tried to up the intensity above 80% I couldn’t. There was no way I could have jumped.

“It’s the first time it’s ever happened in my career, so it’s a great time for it to happen! I hope it never happens again. It’s just really, really, really unfortunate timing. But I’ve come back from worse.”

The Blackburn athlete is now looking forward to winning medals at the Commonwealth Games and European Championships. “I’ve still got the Commies and the Euros. I’ve had a preliminary medical exam and it’s nothing too serious. This year has been a challenge and it’s just another thing for me to negotiate past.”

British pole vaulters in Eugene have not had great luck as British men’s record-holder Harry Coppell arrived at the World Championships with his poles having been smashed during the flight to the United States.

More in this category: « Brigid Kosgei powers to women’s win in London Jonathan Broom-Edwards: “It’s the hardest thing I’ve ever done” »
back to top