Commonwealth Games Countdown: Now it gets real as the squash players arrive at the athletes’ village 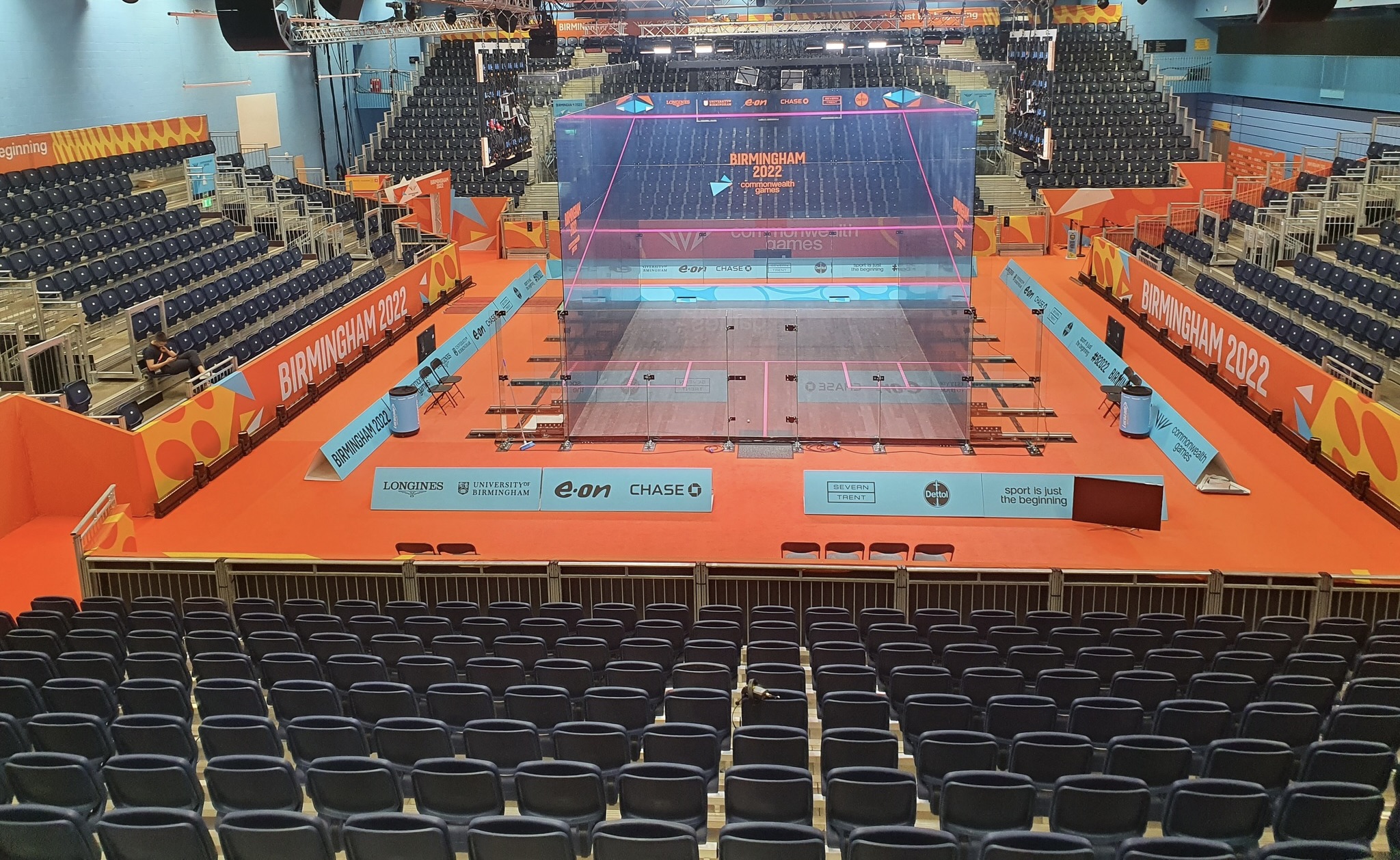 Excitement is building as the Commonwealth Games 2022 squash tournament draws nearer. The squads enter the athletes’ village today and will have a couple of days to get acquainted with the surroundings before the Opening Ceremony on Thursday and the first ball being struck on Friday.

Now it’s getting real. The first images have been released of the main squash venue at the University of Birmingham and the draws have been published.

Prince Charles will be welcoming all the athletes at Thursday night’s Opening Ceremony at the revamped Alexandra Stadium.

Rumour has it that  former WSF president Tunku Imran from Malaysia will be on hand to offer some technical advice after some problems at the Glasgow opening ceremony in 2014.

According to the excellent Inside The Games website, the Prince, who was then President of the Commonwealth Games Federation, cut his thumb when as he struggled for 30 seconds to release The Queen’s message from the baton that had just been passed to him by Scottish cyclist Sir Chris Hoy.

According to the report, “the beefy cyclist had attempted to help in the operation as the Prince, who insisted afterwards that he had practiced opening the baton ‘two or three times’ had continued to struggle”.

At the following day’s media briefing the Prince revealed: “I had a little bit of collateral damage. I cut my thumb on that wonderful piece of Scottish engineering, but it was my fault. I’m not sure Chris Hoy helped but all’s well that ends well. I raised a laugh.”

When it comes to meeting royalty, Squash Mad published a recent series about some serious breaches of etiquette in the sport, notably concerning opponents of the late HRH Prince Philip, who was Patron of England Squash.

As well as having a court at Buckingham Palace, the Duke of Edinburgh also enjoyed playing at the RAC Club courts in Pall Mall. Gordon Kerr wrote about an American friend who erased the Duke’s name from the booking sheet and pencilled in his own when HRH was late for a game.

England’s squash captain at the 2002 Games in Manchester, Chris Walker, was himself a few seconds late for the squad’s presentation to The Queen … because he was reportedly stuck on the throne himself.

In his most recent Countdown Column here on Squash Mad, three-times gold medal winner Nick Matthew offered plenty of sound advice to all of the athletes, and especially those making their Games debuts: “You have a couple of days to act as a tourist and then the focus is all on winning medals.”

Nick was England’s flag-bearer in Glasgow and, as the squash announcer at the brilliant Scotstoun venue, I had the honour of inviting the sell-out 2,500 crowd to sing ‘Happy Birthday’ to Nick AND his opponent, Scotland’s home hero Alan Clyne, when they met in the third round.

What an amazing coincidence that they should be meeting in the Games and sharing the same birthday on that very occasion.

Nick won that battle in straight games and went on to beat his great English rival James Willstrop in a brilliant final lasting 99 minutes.

He and Adrian Grant met Clyne and Harry Leitch in the semi-finals of the men’s doubles and a gathering of the clans provided huge support for the home heroes before England won through.

However, Nick and Adrian were denied another gold when they met Australia’s David Palmer and Cameron Pilley in the men’s doubles final. The winning shot, struck by Pilley, proved to be the final sporting moment of the whole Games programme and brought the curtain down on a hugely successful 11 days of packed crowds for the squash at Scotstoun.

Nick revealed in his column here the other day that there may just have been a tiny block by Mr Pilley that shut him out on that right hand wall.

One of my favourite moments in Glasgow was to announce the most glamorous name in squash, that of Malaysia’s Valentino Bon Jovi Bong.

Birmingham promises to have the same vibe as Glasgow, so stay tuned to Squash Mad every day for some outstanding coverage.

Seeds announced: Paul Coll and Joelle King are top seeds in the singles

Squash And The Royals: Pinching A Court from Prince Philip