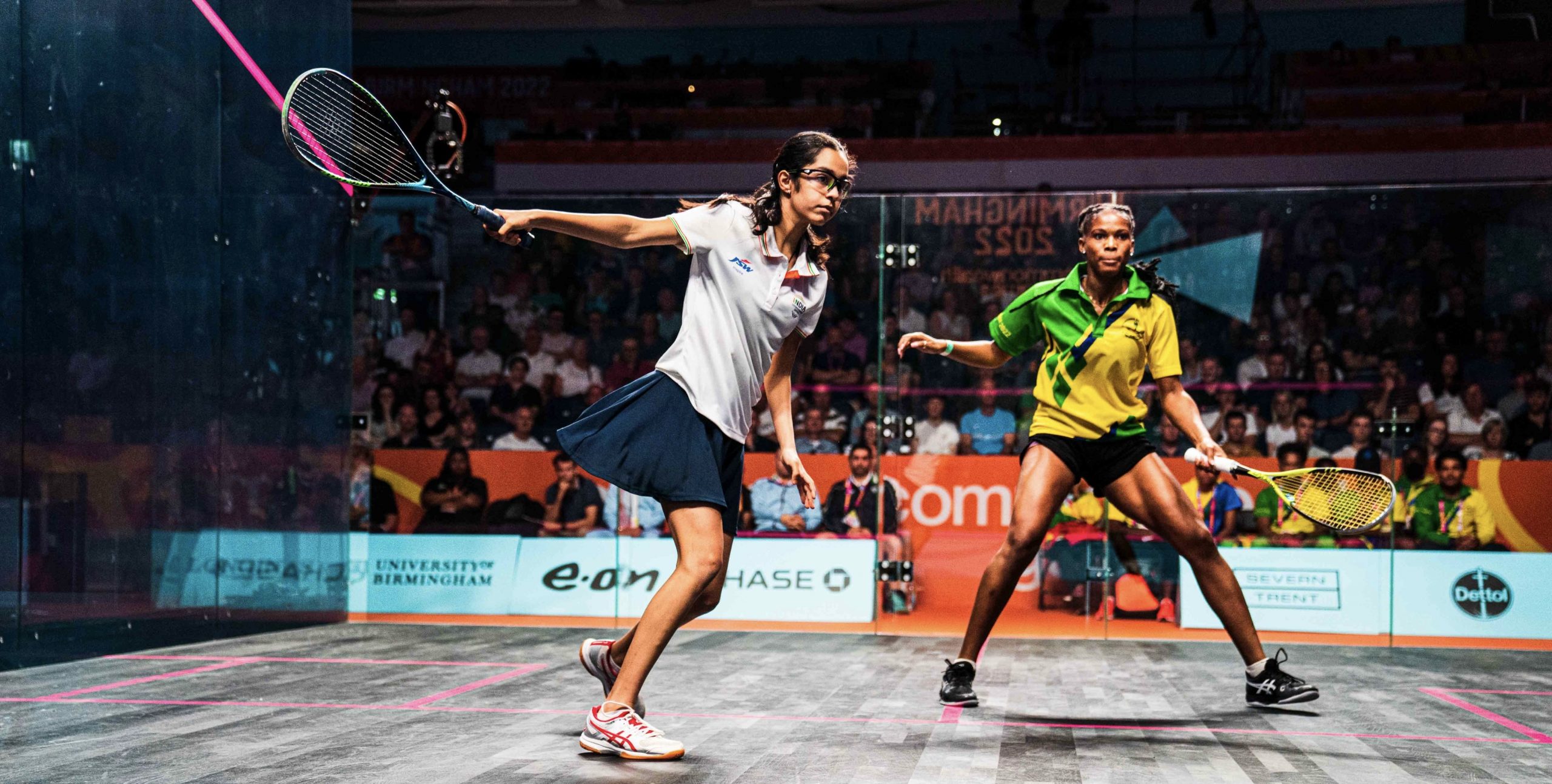 The two youngest players in the Commonwealth Games both enjoyed victories on the opening day of competition.

Singh beat Jada Ross of St. Vincent and The Grenadines in straight games, winning 11-5, 11-2, 11-0 as she made a dazzling debut on the glass show court inside the University of Birmingham sports centre.

Sultana overcame Charlotte Knaggs of Trinidad and Tobago in a massive five-game battle, triumphing 9-11, 11-3, 11-3, 7-11, 12-10. She had to fight back from 8-4 down in the fifth game to draw level and she then clinched victory on her second match ball.

In tomorrow’s second round, Lijana meets Canada’s Hollie Naughton and Anahat takes on Emily Whitlock of Wales, with both matches on Court One. Both Naughton and Whitlock are seeded in the 5/8 group.

Singh said: “It’s really exciting because I’m getting to play a lot of senior players and it’s my first senior tournament. It’s really fun! My family are here with me now and cheering me on really loudly.

“I didn’t really know what to expect, but now I know I can win and I’m doing really well. I got more confident as the games went on. I wasn’t really confident, but I had nothing to lose, so I wasn’t really nervous either.”

“A lot of people have said it’s good that we’re bringing in a youngster, but she’s here on merit. She is that good. I’m looking forward to seeing her go further from here.”

Men’s top seed Paul Coll faces Malta national coach in the second round. Engerer is looking forward to the occasion after beating his 18-year-old Malta team-mate Kijan Sultana, who was a flag-bearer for the Mediterranean island last night.

Engerer said: “Kijan is devoted to the game and has aspirations of turning pro. He is so quick – I feel like I’m in slo-mo and he is on double speed. It’s a joke the way he moves round the court.

“Kijan is a player who is up-and-coming and I’m sure he has plenty of Commonwealth Games ahead of him. It’s not nice to play your countryman, but I‘m just glad we both have the opportunity to play on the showcourt tomorrow.”

On playing the top seed in the second round, he added: “I was glad to get off in four games and have something in the locker against Paul tomorrow. My expectations aren’t much but I’m just going to enjoy the occasion.

“This is squash’s biggest event, so I’m going to savour every moment.”

From the youngest players to a four-times Commonwealth Games veteran: Uganda’s Mike Kawooya won through to a dream second round tie against No.2 seed Joel Makin after beating Marcus Adela of Seychelles in the final match of the opening day’s programme.

What a fitting reward for a lovely guy who works so hard to promote squash in Uganda. I met Mike in Glasgow in 2014 and we have kept in touch ever since. I hope he can grab a few points off the No.2 sed tomorrow!

Mike said: “This is a very big opportunity for me as well as for squash in Uganda. My first time ever on the glass show court in front of a huge crowd and I am going to give it all I have in me.

“I am very happy to have won my first match and I think it was my greater experience that helped me to win. I am so looking forward to my next match against Joel Makin. He is an amazing player and ranked seven in the world. Wow!”

Round two of squash at the Birmingham 2022 Commonwealth Games begins tomorrow at 12 noon local time.

In the match of the day, Sri Lanka’s Shamil Wakeel fought back from two games down to beat Barbados’ Shawn Simpson.

The powerful and accurate Simpson had the upper hand in the early exchanges, taking the first game 11-6 before edging the second 11-9.

Wakeel, though, dug deep. The Sri Lankan moved around the court well and began to find his length, taking the third game 11-6 and then levelling the match with a narrow 11-9 win.

With momentum and the crowd behind him, Wakeel came into the crucial fifth game flowing with confidence. The 23-year-old looked sharp as Simpson made multiple errors, with the Sri Lankan cantering to an 11-1 win to the cheers of the crowd to set up a second round clash with India’s 3/4 seed Saurav Ghosal.

Speaking after the match, Wakeel thanked his coach and the crowd for the support, adding: “I’m happy with my performance because I tested positive for Covid-19 a week ago and today was my first day back on court for 10 days. It was tough. He was winning 2-0 and I came back. I feel so much better now! The first few games I was not fit. I thought I was going to lose.

“I haven’t played a match on a glass court for five years. It’s so different to a plaster court. I couldn’t get used to the reflections and the crowd. It was a great experience, though, and I’m so excited to play Saurav tomorrow.”

While there were no English players involved, there was plenty of home interest in the first match of the evening session, with Scotland’s 9/16 seed Rory Stewart playing Kenyan University of Birmingham physics student Muqtadir Sadruddin Nimji.

World No.66 Stewart took the first game 11-7 but was pushed all the way in the second by the World No.496. The Kenyan forced Stewart into errors with impressive attacking play, but fell just short after Stewart – who drew applause from the crowd after telling referee Mike Collins that his initial game-winning shot was Nimji’s point – took the game 13-11 before the Scot wrapped up the win with an 11-4 win in the third.

“I kept telling myself ‘I’m not nervous,’ but I guarantee I was. It was really difficult and I’m glad to get through.

“There were a few shouts [for Nimji] but there are lots of Scots in the venue and thanks to them.”

Nimji said: “Rory was a great sportsman to not take a game winning point in the second set. I was very surprised with that. I know lots of people who would not have said anything.”

“I knew when I applied to the University of Birmingham that the Commonwealth Games would be held here. I missed out on the last Games by one position, which I was devastated about. I looked online to see where the next Games would be held, and it was at the same time I was applying to university.

“It was a great turnout; it was surprising to see so many people. It’s so cool for a first-round match. It was great to have all the support, from all the people at the University of Birmingham, and those at home in Kenya.”