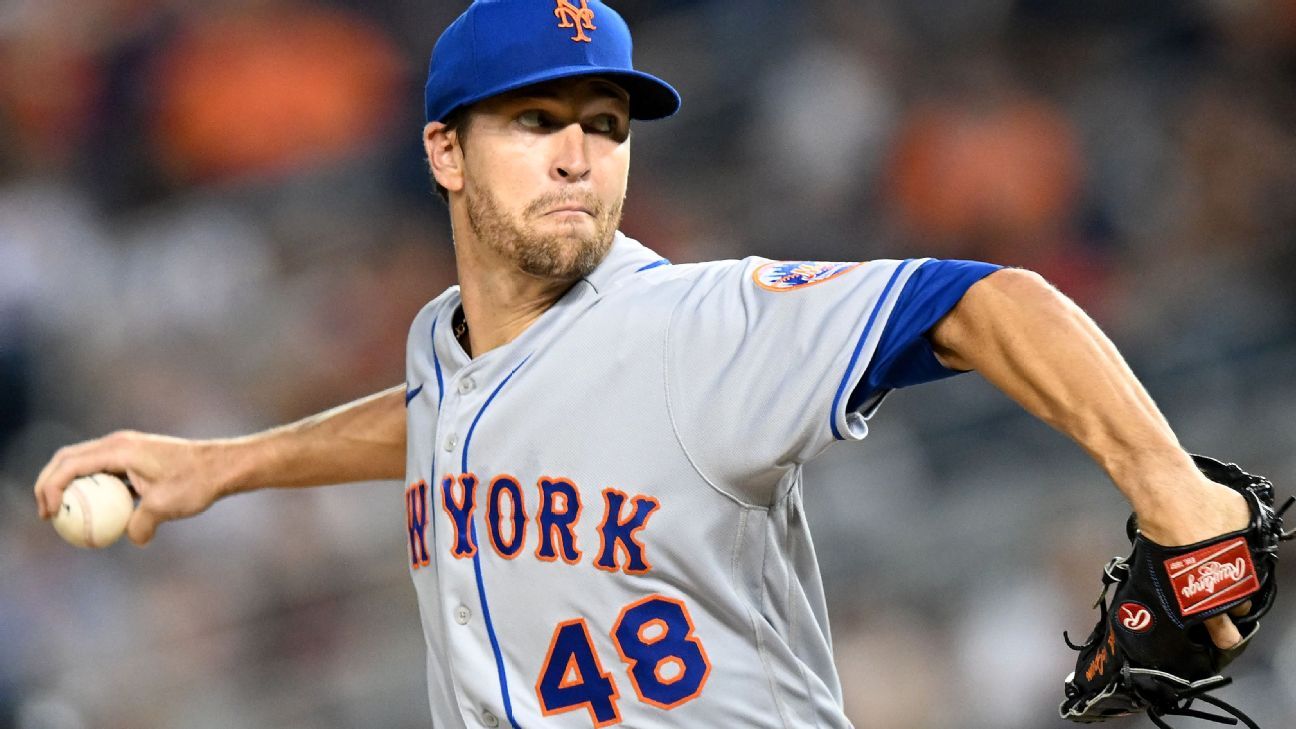 WASHINGTON -- Jacob deGrom dazzled in his first major league start in more than a year, allowing one run on three hits and striking out six in five innings before a bullpen meltdown cost the New York Mets in a 5-1 loss to the Washington Nationals on Tuesday night.

Sidelined for the second half of last season by an elbow injury and shut down late in spring training because of a stress reaction in his right scapula, deGrom got a standing ovation from a crowd full of Mets fans prior to his first game back in almost 13 months.

"It was good to see him back out there, it's been a long road for him," Mets manager Buck Showalter said. "Now we have got to stay on that road."

Serenaded with applause when he delivered a 99 mph fastball on his first meaningful pitch since July 7, 2021, deGrom threw 46 of 59 for strikes before coming out of the game around the time the team planned for.

"His fastball was over 100, and his slider is nasty," Washington manager Dave Martinez said. "I know that he's still trying to build up, but his stuff was really good."

"Felt good," deGrom said. "Definitely had some nerves early on. But like I said, it's been a year-plus since I've been out there, so it was definitely exciting. Wish for a different outcome, but definitely happy to be back out there."

The 34-year-old two-time NL Cy Young Award winner got all but one of his strikeouts swinging and was much sharper than his final rehab start in the minors last week when he allowed four runs in four innings on 67 pitches. He left with a no-decision after Francisco Lindor homered for the NL East leaders in the sixth.

"Whenever you're pitching normally, you're nervous kind of leading up to it," he said. "But once you get out there, you settle in."

Mets reliever Stephen Nogosek (0-1) took the loss after allowing a two-run homer to Luis Garcia and a solo shot to Yadiel Hernandez in the sixth. Yoan Lopez also gave up a homer in the seventh, when he got big help from center fielder Brandon Nimmo on a diving catch to end the inning.

Making his first start of the season in the aftermath of the blockbuster trade that sent Nationals superstar outfielder Juan Soto and veteran first baseman Josh Bell to San Diego, Cory Abbott allowed two runs and struck out three in five shutout innings. Victor Arano (1-0) got the win in relief.

Soto was missed in the opposite dugout, as well.

"I was actually looking forward to facing him," deGrom said. "I want to face the best, and he's one of the best hitters in the game."

DeGrom, speaking at his locker after the game, told reporters that he's expecting to pitch on regular rest, and take on the Atlanta Braves Sunday in a pivotal National League East matchup.

"I'm going to prepare as normal," deGrom said. "I felt really good. So I will go through my in-between routine, stick with the plan and run out there every fifth day."

More in this category: « Real or not? Jose Altuve could be MVP again Dodgers honoring Scully with 'Vin' uniform patch »
back to top