Tamim: 'Poor catching had to cost us at some point, today was the day' 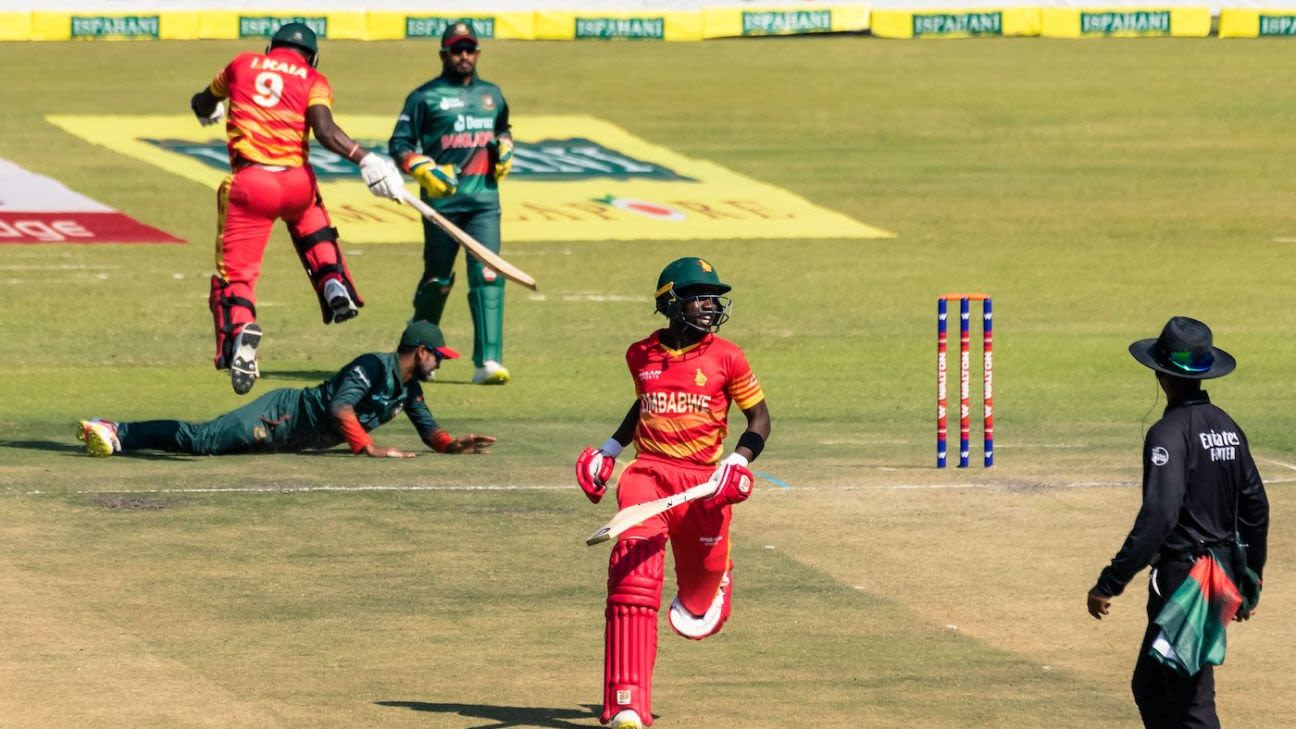 Bangladesh have just lost their first ODI against Zimbabwe in nine years, and a series of lapses in the field, highlighted by four dropped catches, hurt them big time on Friday in Harare. Though Bangladesh scored 303 for 2, Sikandar Raza and Innocent Kaia hit centuries to take Zimbabwe home by five wickets, and the two of them made maximum use of the sloppiness in the field.
Tamim Iqbal, Bangladesh's captain, acknowledged the issue, but pointed out that fielding has been an area of concern all along.

"Our total fielding effort hurt us [in the first ODI]. We have given away too many easy runs," Tamim said. "We could have created a little more pressure through dot balls, instead we conceded easy singles. You can point out a lot of things when we lose. But when we win, I always give the reminder what mistakes we have made. We got away with dropping catches and not fielding well, but today it got back to hurt us."

Substitute fielder Taijul Islam dropped a simple catch in the covers when Raza was on 43. Raza finished on 135 not out off 109 balls. Kaia was dropped twice in one Shoriful Islam over. He was on 68 when Taskin Ahmed dropped him at deep third, and Shoriful spilt a straightforward return catch at the end of the over with Kaia on 74. Kaia scored 110 in 122 balls. Taskin, who had a poor day in the field, dropped another sitter at fine-leg when Luke Jongwe was on 17. That didn't cost Bangladesh much, as Jongwe was dismissed for 24, but the match was as good as over by then.

"I have been saying that we have been dropping a lot of catches so it had to cost us at some point," Tamim said. "This was probably the day. Previously, we have got away with it. We won despite dropping a couple of catches. On these types of wickets [which are good for batting], when you drop four catches, you are not going to win the game.

"We have to take the chances. When there's help in the wicket [for bowlers], there are always chances coming even when you have dropped a catch. But on such a good wicket, it becomes very difficult. We couldn't hold on to any of the four chances. It is the biggest difference [between winning and losing]."

Tamim defended the team management's decision to not play a left-arm spinner, and add an extra batter at No 7, Afif Hossain in this case. But left-arm spin has done well for Bangladesh and Zimbabwe over the years.

"As a group, we should have got those 15-20 runs. Those in the middle really tried hard. They have done it a lot of times, so I am not one to point fingers at my players"

"I won't call it [not playing a left-arm spinner] a wrong decision," Tamim said. "The story would have been different had we bowled first. But we have to think about the combination for the next game.

"At the same time, though, we have had our opportunities, which we didn't grab. I am not someone who blames a defeat on other things. We must have made mistakes. We take full responsibility."

Things could also have been different had Bangladesh scored more than the 39 they did in the last five overs despite having wickets in hand. They had the experienced Mushfiqur Rahim and Mahmudullah in the middle for the last four overs, but couldn't get a move on.

"We should have scored 15-20 runs more when you consider the circumstances," Tamim said. "We were 250 for 1, so in that kind of situation you can push a little harder to get those 15-20 runs. We had to tackle the first 10-15 overs, which I thought we handled very well with a good partnership [between Tamim and Litton Das]. We didn't finish well.

"It will be very unfair to point out one or two individuals. As a group, we should have got those 15-20 runs. Those in the middle really tried hard. They have done it a lot of times, so I am not one to point fingers at my players."

More in this category: « Mandhana, Rodrigues and Rana help India win battle of nerves and remain in the hunt for gold George Hill's maiden List A hundred condemns Worcestershire to third straight defeat »
back to top