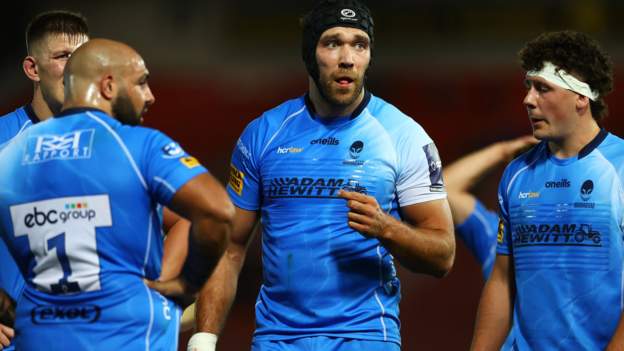 Embattled Worcester put in a spirited display but began their Premiership Rugby Cup defence with a 49-21 defeat by Gloucester at Kingsholm.

The hosts raced into a 14-0 lead before Harri Doel and Finn Theobald-Thomas tries drew the Warriors level.

In the evening's other tie, London Irish won 30-26 at Harlequins.

Last season's beaten finalists threatened to overrun Quins as they raced into a 17-0 lead inside nine minutes, Patrick Harrison, Michael Dykes and Hugh O'Sullivan all crossing in a dramatic four-minute burst.

Momentum swung as the Quins found their feet, yet Jonny Green's try on his senior debut and Will Edwards' conversion was their only first-half response as the Irish defence put in a big shift.

Two quickfire tries from Sam Riley and Cassius Cleaves brought Quins to within four points, but Irish held on.

Warriors show spirit on pitch despite turmoil off it

The opening match of Pool A was a repeat of last season's semi-final, but much has happened since Worcester beat Gloucester on their way to lifting the trophy in May.

The beleaguered visitors were handed a threat of suspension on Wednesday by the RFU unless they find a solution to their ongoing financial strife by Monday.

A scramble to register sufficient players for this game saw them arrive with only a 22-man squad, including 41-year-old academy coach Jonny Goodridge and 37-year-old Mat Gilbert, who retired in April.

The visitors may have feared the worst after Reeves strolled in and Arthur Clark went over from a maul inside 15 minutes.

But the Warriors launched a stirring comeback, Charlie Titcombe's brilliant cross-field kick allowing Doel to dot down before under-siege Gloucester were reduced to 14 men when Clement was sent to the sin-bin.

But the Cherry and Whites restored control after the break as Reeves added a second try, swiftly followed by scores for Clement and Seabrook.

Morris responded with a third Worcester try, yet any faint hopes were extinguished by Thomas' late double, while George Barton completed a perfect night from the tee with his seventh conversion.

It was harsh on a makeshift Worcester side, who will now be left hoping this is not their final match of the competition as their fight for a sustainable future continues.

More in this category: « Quins miss out on play-offs after Lang's late penalty falls short Worcester Warriors suspended by RFU after failing to meet funding deadline »
back to top