Wembanyama: Goal is to be 'unique' within NBA 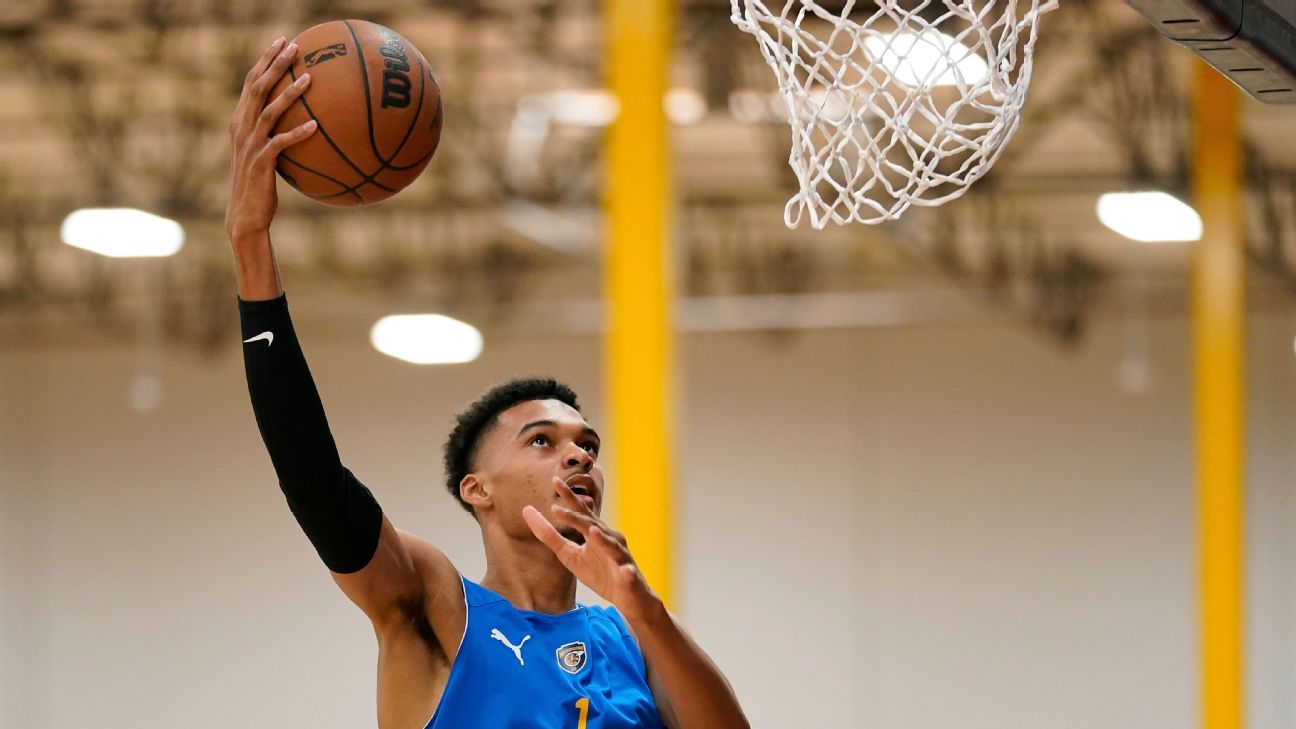 LAS VEGAS -- Victor Wembanyama's favorite players in the NBA right now are Kevin Durant and Giannis Antetokounmpo. That makes sense, given that they're both taller than just about everyone else in the league and have all-world all-around games.

But comparisons to them, or anyone else, are not what Wembanyama is seeking. When the 7-foot-2 French teen comes to the NBA next season -- by most accounts, he would be the No. 1 pick if the draft was held today -- he isn't interested in trying to become the next Durant, or Antetokounmpo, or Dirk Nowitzki.

The path he wants to take, he said in an interview with The Associated Press, will be all his own.

"I'm gonna tell you something that's been going on in my life, like for my whole life, since I've been a kid, even before I played basketball," Wembanyama said. "I've always tried to do (something) different. I'm not even talking about sports, whatever. Any field, I'm always trying to be original, something original, something one of one, something that's never been done before. And this is really how it worked in my life. I don't know where it comes from. I think I was born with it. I've always been trying to be original. Unique, that's the word."

"My goal," he said, "is to be like something you've never seen."

He is why Metropolitans 92, a team from the top league in France, flew 5,500 miles this week to play a pair of exhibition games against the G League Ignite and another top draft prospect in Ignite guard Scoot Henderson. The Ignite haven't started their season yet. The Metropolitans have already played three games, and are interrupting their regular season to play these exhibitions on Tuesday and Thursday in the Las Vegas suburb of Henderson, Nevada largely to help introduce Wembanyama to the U.S. basketball audience.

Tuesday night will, quite simply, be an event. About 200 scouts are credentialed; every NBA team will be in attendance, most sending multiple people to watch. Some clubs had executives watching practice Monday afternoon. There are journalists who flew in from France, Brazil and Canada for these games that don't count toward anyone's standings. The Los Angeles Lakers and Phoenix Suns play a preseason game in Las Vegas on Wednesday night; some players from those clubs are expected to come get a look at Wembanyama, as are some members of the WNBA champion Las Vegas Aces.

Wembanyama is listed at 7-foot-2 -- some say he's 7-foot-4 -- his wingspan is nearly 8 feet and he can nearly grab the rim -- 10 feet in the air -- without even jumping. He shoots 3-pointers with ease, almost always unbothered by the efforts of defenders whose flailing arms come nowhere near the ball or his field of vision. He can run the floor. He handles the ball. Passes the ball. Creative. Athletic, blessed with the genes passed along from Felix Wembanyama and Elodie de Fautereau; his dad was a track star, his mom was a basketball standout.

Few, if any, prospects since LeBron James in 2003 have had this big of a can't-miss label on their shoulders as an 18-year-old.

"I was built for this, I guess," Wembanyama said. "All of what happens to me, I expected for myself. So it's just a checklist of expectations. I'm not surprised by what's happening to me. And yeah, this is happening, this is how I can manage it and I think I managed it well."

He already speaks almost-perfect English, which will come in handy considering next June, then at the age of 19-1/2, he'll be getting selected by a team and moving to the U.S. (or Canada, if Toronto secures the pick that will land Wembanyama). It's hard for him to fathom that he has just a few months left living in his native France.

But he's also unbothered by what's happening, and what's coming. He speaks confidently, plays even more confidently, and truly seems to enjoy all the attention that comes with being one of the tallest human beings on the planet. That confidence, however, doesn't come with arrogance. He knows he's good. He wants to get better.

That's where Metropolitans 92 coach Vincent Collet comes in. The coach of France's national team is tasked with taking Wembanyama and making sure he's as NBA-ready as possible by next summer.

"Many people around him are always telling him 'It's great, what you do is fantastic.' And me, I am the coach, so I am the one that most sometimes say 'This is not good, this you could do better,'" Collet said. "And for me, this is the most important, to teach him."

On the court, Wembanyama tries to be all business.

Off the court, he tries to still be a kid when he can.

He loves to read. Loves to draw. He plays video games. He showed off soccer moves with a basketball on Monday, expertly juggling -- in soccer, that means to flick the ball in the air with one's foot and leg without letting it hitting the ground -- while talking and walking. He also is working on some projects that he said "have nothing to do with basketball," and when pressed to give some hints on what that meant, he offered a slight smile and said, "if they're successful, you'll hear about them for sure."

After this week in Vegas, the French season resumes at home. Every Metropolitans 92 game will be followed because of him. This spring, draft talk will intensify. Then, on June 22, 2023, NBA commissioner Adam Silver is scheduled to walk to a lectern and say "with the first pick in the 2023 NBA draft ... " and if all goes to plan, Wembanyama will take the stage seconds later for the ceremonial handshake.

That's when his path, the path to being "one of one," will truly begin.

"At the end of the day, regardless of what position you get picked in the draft, I think the most important is to have the best career afterwards," Wembanyama said. "But as an athlete and as a competitor, I can't accept not to be No. 1."