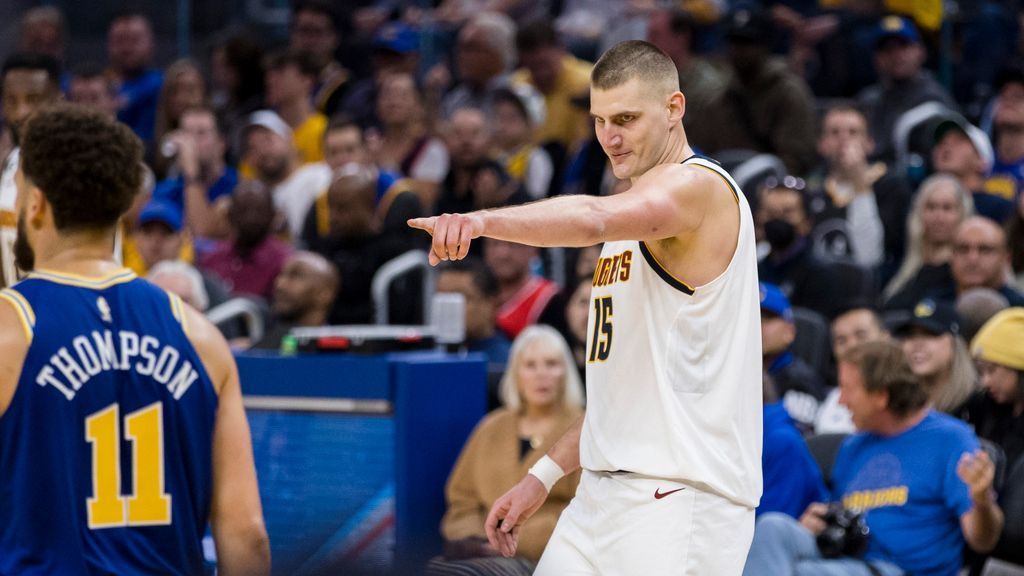 SAN FRANCISCO -- Jordan Poole put the Golden State Warriors down just one point with 14 seconds remaining after stealing the ball off a lazy Denver Nuggets pass and laying it back in.

But just a split second later, as the Warriors were still getting back in transition, Nikola Jokic inbounded the ball with a cross-court heave -- something Jokic admitted was "a risk" after the game.

It was one he was more than willing to take after Bones Hyland turned the ball over, leading to Poole's bucket, and Jokic saw nothing but a swarm of Warriors jerseys.

"My guys had to be open," Jokic said.

So he chucked the ball 85 feet to find a wide-opened Bruce Brown, who complete the play with a dunk. That -- and a pair of free throws a few seconds later -- sealed the Nuggets' 128-123 win on Friday night.

Draymond Green said the Warriors weren't exactly caught sleeping on Jokic's pass, but there was a lapse in communication. Usually, the Warriors want their center back underneath the other basket, but in this scenario the center was Green, and he was trapping.

Jokic finished the game with 26 points on 7-of-13 shooting, 12 rebounds and 10 assists -- his 77th career triple-double. Jokic now has the second-most triple-doubles by a center in NBA history behind just Wilt Chamberlain (78).

Jokic scored or assisted on 50 Denver points, but it was his passing that stood out above his other stats.

"Honestly, we have eight years together now and [nothing surprises me]," Nuggets coach Michael Malone said. "So many big games, so many moments when he's made the big play, the right play and a game-changing type of play ... his IQ is off the charts. He's out there playing chess and a lot of other guys are playing checkers."

Against the Warriors, the Nuggets scored 24 points off Jokic's passes on 10-of-15 shooting, including 4-of-7 from three. Three of his 10 assists came in transition and six of them led to open looks.

Five different teammates scored off his passes, with Kentavious Caldwell Pope and Bruce Brown benefiting the most.

Caldwell-Pope shot 3-of-5 off Jokic's passes, while Brown went a perfect 4-of-4 including the game-winning dunk.

Before the game, Malone spoke on the need for his team to build chemistry as the Nuggets welcomed eight new players, including Caldwell-Pope and Brown, and reintegrated Jamal Murray and Michael Porter Jr.

With that in mind, Malone has been challenging Jokic to take his leadership to the next level by not just playing by example, but by being vocal and teaching.

Three of four times on Friday, Malone saw Jokic grab the whiteboard during timeouts and approach his new and younger teammates, explaining where he wants them on plays.

"If you ask Bruce and Kenny Pope, from afar they probably admired Jokic's passing from playing against him. But it's different watching than now you're with him," Malone said. "He makes the game so easy, but you have to be ready."

The Nuggets headed into halftime having scored 70 points and up 18 on Golden State, but a patented Warriors third-quarter rush to pair with a strong fourth put them within eight with about five minutes to go.

Stephen Curry finished with 34 points on 10-of-22 shooting, while Andrew Wiggins added 23 points and eight rebounds and Draymond Green had 13 points and nine assists.

But Denver outscored the Warriors 9-4 in clutch time to seal their victory.

"Our second quarter was one of our best quarters in a long time against a quality opponent," Malone said. "But down the stretch, there are so many things we need to clean up ... But it's a hell of a win. We can savor it for about two and a half hours on the plane, and then tomorrow night we have our home opener."