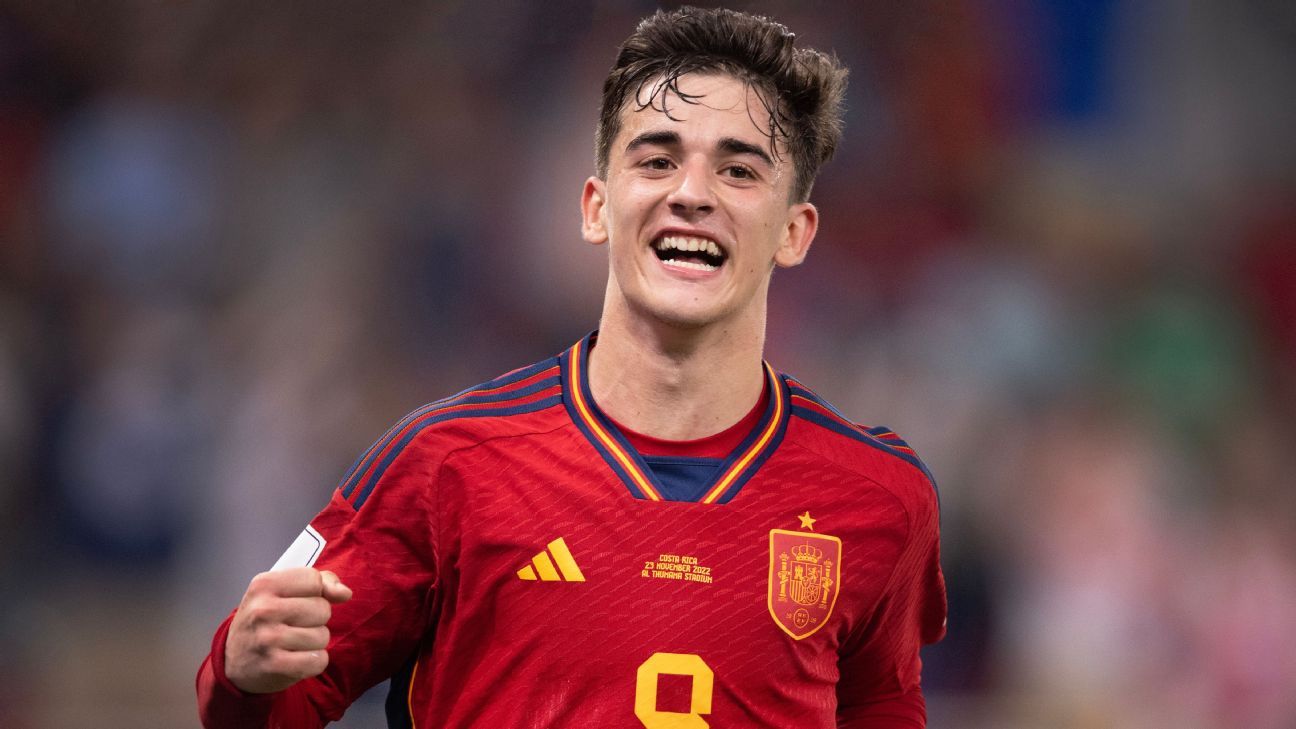 AL THUMAMA, Qatar -- Spain midfielder Gavi became the third-youngest goal scorer in World Cup history and youngest since Brazil legend Pele in 1958 with his 74th-minute strike in a 7-0 win against Costa Rica on Wednesday.

When he stepped on the field to start the game, the Barcelona prodigy also became the youngest player (18 years, 110 days) to appear for Spain in a major international tournament (World Cup or European Championship).

"I never dreamed to be here at this age," Gavi said through an interpreter. "I'm so happy to be here. This is only one step. I need to keep going."

Pele was aged 17 years, 249 days when he scored in Brazil's 1958 World Cup final win over Sweden. He holds the record for the youngest to score in a World Cup when scoring 10 days earlier in the quarterfinals.

Mexico's Manuel Rosas is the second-youngest scorer, aged 18 years and 93 days when finding the net in the inaugural 1930 tournament.

The teenager struck it with the outside of his right boot and it deflected in off the right post in what was one of the most impressive displays of skill in the tournament so far.

His overall contribution earned him FIFA's player of the match award.

"I know I'm the youngest in the team and I respect everyone, but on the field it's different and I bring out my best. I'm proud to be in that podium."

It was a historically dominant win for Spain, who didn't allow a single shot and recorded the most passes (1,043) and highest possession percentage (81.3) in a World Cup match since at least 1966.

A lot of that was dictated by a midfield featuring two teenagers, with Gavi's Barcelona teammate Pedri starting next to him in front of Sergio Busquets.

"We controlled the game throughout, which was our first objective," Spain coach Luis Enrique said. "We were exceptional in possession of the ball, exceptional in our finishing.

"All 16 players were excellent but we still have room to improve. I don't know who will play [against Germany on Sunday]. I don't think I've ever repeated a starting 11."

Spain's victory was the most lopsided win at a World Cup since Portugal beat North Korea 7-0 in 2010.

Information from the Associated Press was used in this report.

More in this category: « Canada 'showed they belong' at WC - Herdman Messi: Argentina have finally arrived at WC »
back to top