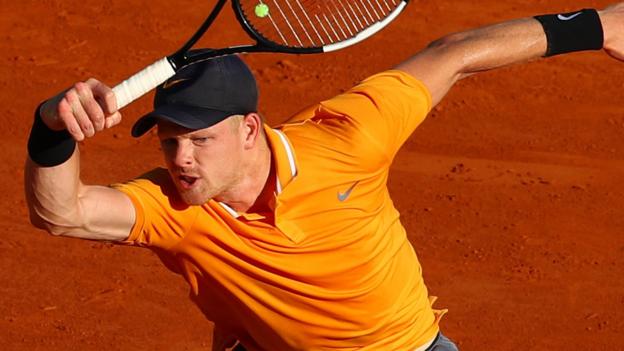 British number one Kyle Edmund let an early lead slip as he was beaten in the first round of the Monte Carlo Masters by Diego Schwartzman.

The 24-year-old won only one of the final 13 games against Schwartzman, who is one place below him in the world rankings.

Schwartzman will face either Jo-Wilfried Tsonga or Taylor Fritz next.

There were five breaks of serve in a scrappy opening set before Edmund converted his first set point.

The Briton broke Schwartzman at the first opportunity in the second set but Schwartzman won nine straight games to level the match and take an early third-set lead.

Edmund held serve for 1-3 and had a break point in the next game, but a missed backhand volley allowed Schwartzman to extend his lead.

Schwartzman, who reached the French Open quarter-finals in 2018, went on to serve out victory.

The two will face one another again in the men's doubles on Tuesday. Edmund and compatriot Neil Skupski are scheduled to play Schwartzman and Joao Sousa of Portugal from 14:00 BST.

Rafael Nadal also begins his title defence on Tuesday against fellow Spaniard Roberto Bautista Agut. The match will be Nadal's first in over a month after he injured his knee at Indian Wells in March.