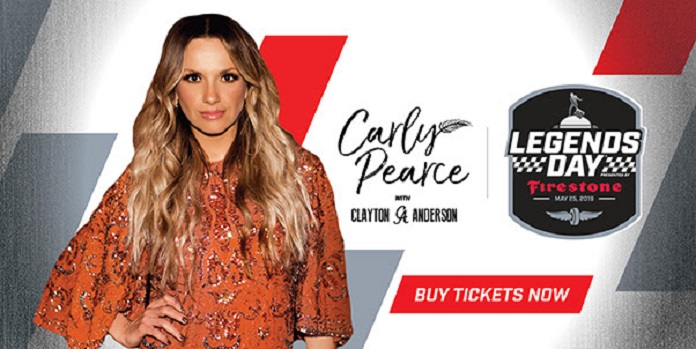 INDIANAPOLIS – Chart-topping country artist Carly Pearce and Clayton Anderson have been added to a star-studded lineup for the Firestone Legends Day Concert on May 25 at Indianapolis Motor Speedway.

Fan favorites at IMS, Pearce and Anderson will each perform sets one day before the 103rd Indianapolis 500 presented by Gainbridge.

Multi-platinum, Grammy Award-winning Zac Brown Band will headline the concert, which starts at 3:30 p.m. on the Firestone Stage inside turn four of the IMS oval.

“It’s always great to welcome back Carly Pearce and Clayton Anderson to IMS,” IMS President J. Douglas Boles said. “They have thrilled our fans with their talent and magnetic performances, whether it’s singing the national anthem or performing on our infield concert stages. They will put on a great show, along with Zac Brown Band, during the Firestone Legends Day Concert.”

Born into the bluegrass brawn of Kentucky, Pearce has never known a moment that country music wasn’t her destined path. At the age of 11, she began touring with a local band, at 16 quit high school for a job performing at Dollywood while being homeschooled and learned humility working odd jobs upon moving to Nashville.

Now, she’s defying odds with her No. 1 debut “Every Little Thing,” which steered a chart-topping trifecta on SiriusXM’s “The Highway” that also includes “If My Name Was Whiskey” and “Hide The Wine.”

With the gold-certified title track from her highly acclaimed debut album, “Every Little Thing,” Pearce became the highest-charting solo female debut since July 2015 and one of only three to accomplish the feat in over a decade.

In 2018, Pearce earned her first CMT Music Award Breakthrough Video of the Year for Every Little Thing, as well as a Radio Disney Music Award for The Freshest! – Radio Disney Country Best New Artist.

She has been nominated for 2019 iHeartRadio Music Awards Best New Country Artist and ACM Awards New Female Artist of the Year, where she also presented during the live broadcast.

Pearce performed the national anthem before the Big Machine Vodka 400 at the Brickyard in 2017 and 2018 at IMS. She recently wrapped her co-headline tour with Russell Dickerson and will join Jason Aldean’s Ride All Night Tour this summer.

Southern Indiana native Anderson has released three albums, including his latest record, “Only To Borrow.”

Recorded in Los Angeles and Nashville, this six-song EP was written and produced by Anderson and some of music’s most talented writers, musicians and producers. The album’s first single, “In the Dark,” earned immediate streaming activity online and captured the attention of influential music playlist programmers.

In college, Anderson decided to learn guitar because he thought it would impress the ladies. Next thing he knew, he and his friends were playing local parties and bars.

After he graduated, Anderson won Kenny Chesney’s Next Big Star Competition. It was the boost of confidence he needed to leave his job at a mortgage company and move to Nashville.

Anderson’s first record, “Torn Jeans & Tailgates,” was released in 2011 and climbed to No. 12 on the iTunes Country Chart, situating itself next to household names like Zac Brown Band, Brad Paisley and Blake Shelton.

Anderson has traveled across the country playing backrooms, side stages and honky tonks from Michigan to Florida, each time gaining a few more fans and a better foothold on areas that aren’t traditional country strongholds.

He’s opened for some of country’s biggest stars, including the likes of Shelton, Jason Aldean, Eric Church, Darius Rucker and even Mr. Party himself, Jimmy Buffett.

Anderson performed the national anthem before the Red Bull Air Race in 2017 and 2018 at IMS, and his performance during the Firestone Legends Day Concert featuring Keith Urban in 2017 was a hit with fans.