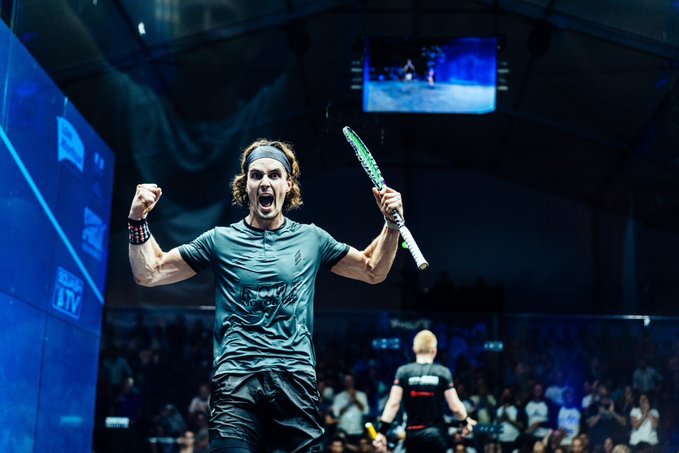 World No.3, and home favourite, Camille Serme, and New Zealand’s Paul Coll are the Open de France – Nantes 2019 presented by Tailor Capital champions, after they won their respective matches at the Chateau des ducs de Bretagne on Saturday evening.

Serme took the title after she defeated US No.1 Amanda Sobhy in an enthralling four-game final. She went a game down though, despite being 8-4 up in the first. From there, the American fought back to win seven of the next eight points to silence the French crowd.

However, they were not quiet for long, as they soon got behind their compatriot, and it gave Serme the boost she needed. The World No.3 dominated the opening part of the second game, and although Sobhy won a few points towards the end, the Frenchwoman took it 11-6 to level the match.

The third game was much tighter, as both players started to show some fatigue in the sweltering conditions on court in Nantes. However, from 6-6, Serme took four straight points to have game ball. Although Sobhy saved two of them, the World No.3 took the game 11-8 to move into a 2-1 lead.

The American started the fourth game just as she needed to by winning the first three points. However, Serme was able to move into a 10-7 lead. Sobhy saved two match balls, but the Frenchwoman converted the third to become the Open de France – Nantes Champion at the first time of asking.

“I am very happy. It has been a while since I won a title and winning here in front of my family, it is a big thing for me,” Serme said emotionally after the win.

“I had to keep the rallies as long as possible. The crowd helped, especially in the last few rallies when I was feeling a bit tired. It give you that extra boost, because you want to win for them as well.

“I think for both of us, I could hear her breathing louder than usually. It was tougher for both of us, but you have to deal with it. It is not easy because you sweat a lot and it makes the racquet slippery, which affects your shots, but it does affect both of you.

“I know it is not a Platinum event, but it is still a big tournament. There were some unbelievable players this week. Playing at home in front of my staff, my family, it is a big thing for me!”

Speaking after the match, Sobhy said: “That is the hardest match I have ever had to play, but I think she just had a bit more juice both physically and mentally in the end.”

In the men’s final, World No.6 Paul Coll got the better of Wales’ Joel Makin in a brutal three-game affair to win the title. The Kiwi ran out the winner in straight games, but it took over 70 minutes in typical ‘Superman’ fashion.

In part, that came down to a mammoth first game, which lasted over 26 minutes. Coll took it on a tie-break to take the momentum into the rest of the match.

The second saw the World No.6 dominate his Welsh counterpart, restricting the ‘Golden Tiger’ to just three points, as he doubled his lead in the match. He then went out into a big lead in the fourth, holding a 9-4 advantage.

However, the Welsh No.1 was able to fight back, wining five straight points to tie level in the game at 9-9. It would be Coll that went on to win the game, and the match, though, to lift his second title of the calendar year.

“I was very happy with my performance, it was probably my best squash all week which is what you want to do. It was almost like a new event this evening because I only got four or five hours sleep, so mentally I had to be on it today.” Coll explained.

“Joel played really well today but I am happy with my performance and you cannot get better than starting the season with a victory at the first chance.

“I led most of the first game so if I let that slip it would have been a real momentum killer for me. I probably should have closed it out a bit easier, but he came back very strong. I think it was key for me, especially because I was in front for the majority of it, so it would have been flattening had I lost it.

“He was tired, but I honestly think he played his best squash well. He was aggressive and I was probably a bit passive because I thought I had already won. He played his best from 9-4 down which was a bit annoying. I am very happy to close it out in three because it would have been a very tough push to get going again in a fourth.”

After the final, Makin said: “He played some great squash, he was tight, consistent and error-free. It was a tough 70 minutes for 3-0. He was consistent and solid.”