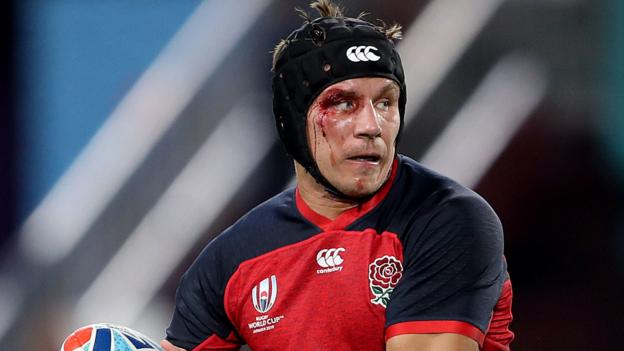 England's Piers Francis has been cited for foul play following a tackle that left United States full-back Will Hooley with concussion.

Francis, who will appear before a disciplinary panel in Tokyo, made the tackle early on in the Rugby World Cup match, which England won 45-7.

US flanker John Quill was sent off for a high tackle late on in the match.

Australia's Reece Hodge and Rey Lee-Lo of Samoa both received three-match bans after being cited for high tackles.

High tackles are under heavy scrutiny at the World Cup, after World Rugby introduced new guidance to reduce head injuries.

The high tackle framework was announced after a World Rugby study found that tacklers were four times as likely to sustain a head injury if their tackle was high.

"It's for the players' protection. So we've just got to abide by that and then train it," Wisemantel added.

"The first thing is that the players are aware of the new regulations. The second part is, technique-wise, we train to avoid any sort of mishaps.

"The actual technique we use with [defence coach] John Mitchell mitigates a lot of those risks."

Quill became the first US man to be sent off at a Rugby World Cup for his dangerous tackle on England's Owen Farrell in Kobe.

Regarding Farrell, Wisemantel added: "He's fine, and after the game he acknowledged it was an accident on John's behalf. He's gone in to bat for him."