The de-Mamba-ing of Jayson Tatum has begun 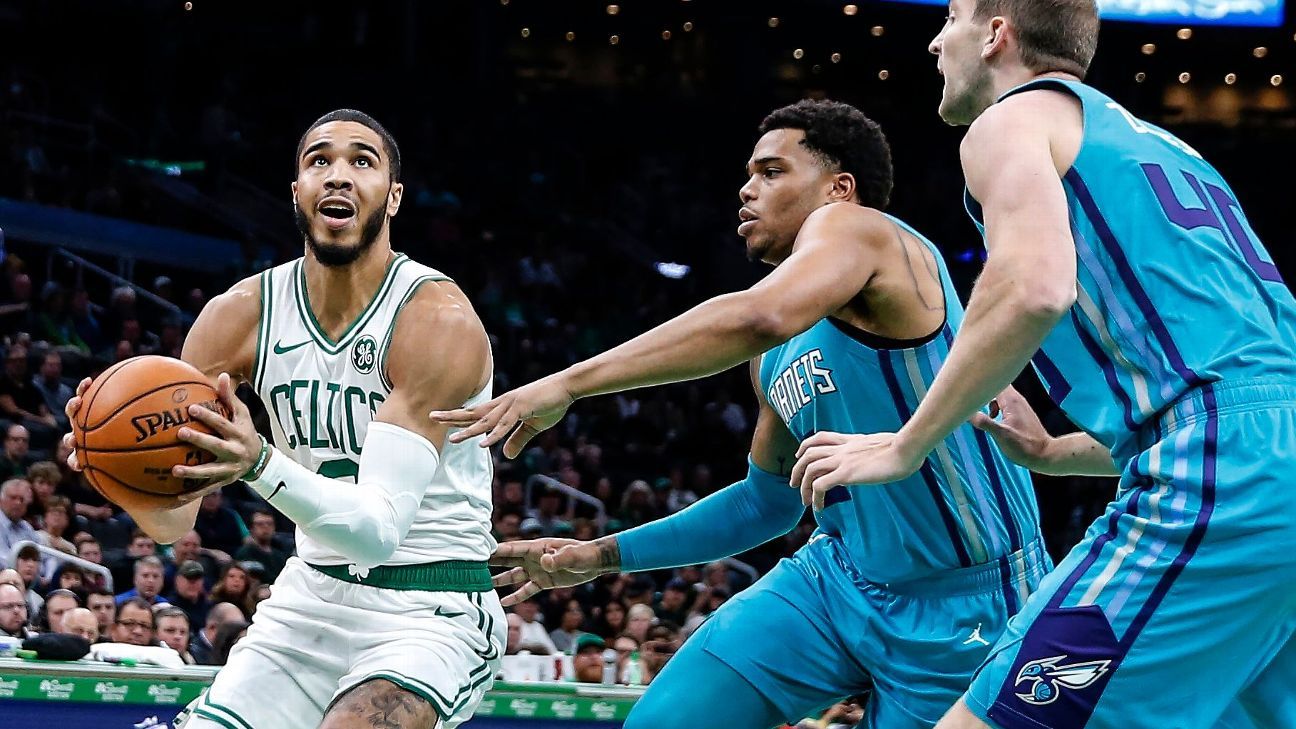 BOSTON -- Nothing went as expected for the Boston Celtics a year ago. Jayson Tatum's season was no exception.

The Celtics entered the season as a favorite to reach the NBA Finals, in part because Tatum, who had been brilliant in the postseason as a rookie, was expected to take a major leap. Instead, the Celtics fell flat, as did Tatum's progress.

When Celtics assistant coach Jay Larranaga sat down with Tatum before the start of this season, he told Tatum that was all behind them.

"I made a deal with him the day before training camp that we would not discuss last year at all," Larranaga told ESPN last week. "This is my first year working with him, and so I just said, 'We're just starting from right here, doing what we know is right, playing the right way and working the right way.'"

Tatum started that process himself almost as soon as the season ended. Now the Celtics hope that they will see an improved version of their young forward -- one that hews more closely with what is required in today's NBA.

Amid everything that was going wrong for the Celtics last season, one thing was clear: Tatum didn't look right.

"[I was] making the game tougher than I probably should have," Tatum said last week.

He'd dribble into difficult midrange shots, including fadeaways. Those were shots Kobe Bryant, who worked with Tatum in the summer of 2018, made a living taking -- and making. But the NBA has since evolved into a league hyper-focused on shots at the rim and beyond the arc -- and, last year, Tatum didn't take enough of either.

Among the 96 players who had at least 100 direct isolations last season, according to data from Second Spectrum, Tatum ranked dead last in efficiency, with an average of .70 points per play.

"Last year was kind of funky in all aspects," Tatum said. "I understand that. I acknowledge that, and I'm just trying to be better this year."

His struggles offered Tatum a vision of what he needed to do to take his game to another level.

"Focus on getting to the basket much more," Tatum said. "Shoot more 3s, and layups, and free throws."

This summer Tatum's trainer, Drew Hanlen, put Tatum through the program he had used with Bradley Beal early in Beal's career. The Wizards wing became a two-time All-Star after eschewing long 2-point jumpers and concentrating on more efficient shots.

Hammering his point home, Hanlen sent Tatum a text breaking down how his shot diet contrasted with some of the NBA's elite perimeter scorers: LeBron James, Kawhi Leonard, Kevin Durant, Paul George and Devin Booker. All of them attempted significantly more than Tatum's 2.9 free throws and 3.9 3-pointers per game.

"I basically said, 'If you just shoot six free throws per game and six 3s per game at the same percentages you did last season, then you'll raise your [scoring] average from 15.7 to 20.7,'" Hanlen said.

That knowledge in hand, they broke the process into six parts:

• Using stats to show how Tatum compares to the best players, and where he needs to improve.
• Watching video to see when he passed up open 3-pointers or driving opportunities to instead dribble into long 2-point shots.
• Creating more separation to shoot 3-pointers.
• Working on his dribbling skills to add both shiftiness and hesitation moves and give him more options to get around defenders.
• Practicing driving through contact and finishing over defenders at the rim.
• Doing drills designed to increase Tatum's playmaking ability.

In addition to that skill work, much of Tatum's improvement this season will boil down to two things: thinking less, and taking what the defense gives him.

Virtually everyone who talked about Tatum's play last season, himself included, described him as thinking too much, or not making decisions quickly enough.

"We just need him to go out there and play," Marcus Smart said. "If you have an open shot, shoot it. Don't force it."

"One of his advantages is how smart he is," Larranaga said. "He can make quicker decisions than the average player. When he slows down and plays slower, he's not using one of his greatest strengths."

That was a point of emphasis for Tatum this summer with USA Basketball coach Gregg Popovich, who preaches the .5-second system -- meaning players have a half-second to shoot, drive or pass after they catch the ball.

While Tatum's FIBA World Cup in China was ended early by a sprained ankle, he'd shown progress in changing his game. That carried over to Boston's preseason opener, when he attempted eight 3-pointers and took three free throws as he scored 20 points in just 23 minutes of action against the Charlotte Hornets.

Playing faster can set up opportunities. Dribbling into contested 2-point jumpers not only played into the defense's hands but also gave his defenders a reason not to fully commit to running him off the 3-point line.

"When the 3 is open, he's got to knock it down," Larranaga said. "And be willing to take it. He's an elite shooter. But he's used to playing with the ball in his hands, he's used to putting it down [on the floor], so I think the biggest thing to getting fouled for him is people really have a fear of him shooting that 3 on the catch. Then all of his drives are going to be easier, and just naturally will get to the line more."

The phrase "fresh start" has been worn out over the past two weeks in Boston. But, at least so far, it applies to Tatum.

"He's been great," Celtics coach Brad Stevens said, adding that this year's training camp has "by far" been Tatum's best yet. "He's shot it. He's drove it. He's been aggressive. He's not hesitating on his 3.

"I think that whatever he needed to improve on, it's been pretty obvious, but you still have to build those habits, and it takes time. He's really made great strides. I thought it started at the end of last year, continued through the summer, and now you can see it. [He knows], 'This is what we are doing.'"

The Celtics are a collection of question marks. Kyrie Irving and Al Horford are gone. Kemba Walker has arrived, as have several rookies. The talent level appears below what it was a year ago -- as are expectations for the team.

Of the many things Boston has to sort out, the single most important question is just how good Tatum can be.

He has the tools to be the go-to scorer every contender needs. And, as he showed with his thunderous East finals Game 7 dunk over James two seasons ago, playing on the game's biggest stage isn't too much for him.

"Jayson has set a level of expectation for himself because he did what very few rookies have done," Stevens said last week. "And that is help win playoff series."

Now, the Celtics are hoping these changes to his game will allow him to do so again.

"He's going to be a star," Walker said. "He really is. Just because of the way he works. Especially now, being around him in training camp and seeing the way he's playing.

More in this category: « Kentucky's Washington declares for NBA draft 'It's the dirty little secret that everybody knows about' »